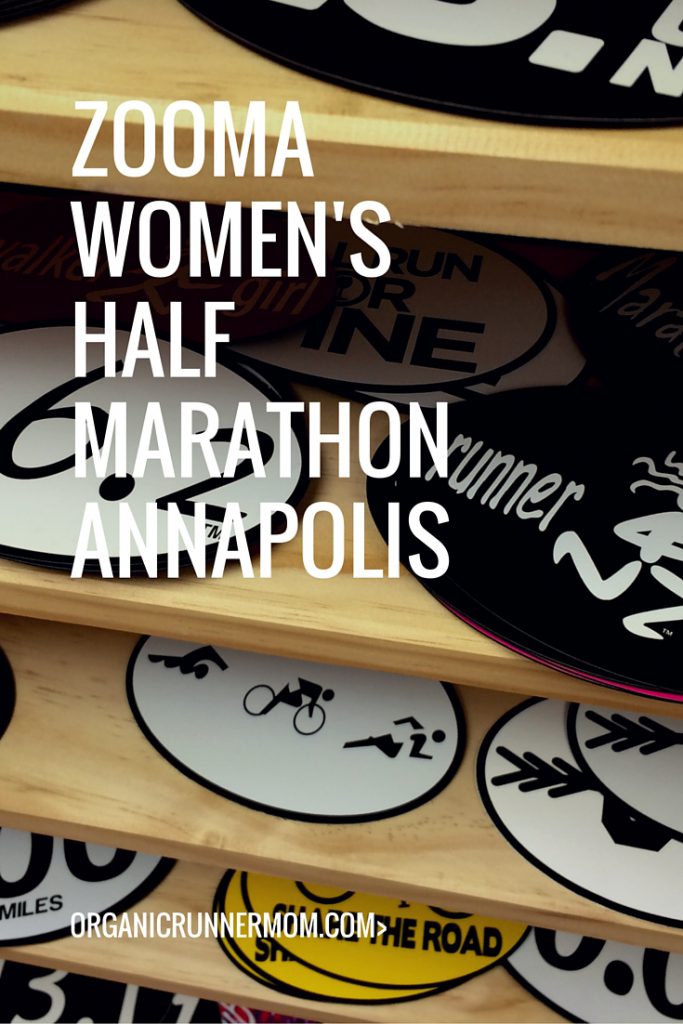 Let the Half Marathon Race-Cation begin!

It’s been a few weeks since I ran the ZOOMA Women’s Race Series Half Marathon in Annapolis, my first race in Maryland. It was hot, humid, hilly, and a blast!I had been looking forward to this mini race-cation for a long time and it lived up to everything that I was looking for in a race and a super fun girls weekend away. I am a ZOOMA Women’s Race Series Ambassador and was super psyched to meet all of the other incredible women. One of the highlights of the weekend was that I got to stay with my friend Cynthia (You Signed Up for What?!), who is a runner, triathlete, mom and blogger like me. We finally met last year at BLOGFEST after connecting about triathlon on line. It was so great to be able to see Cynthia’s little slice of the world and to meet her beautiful kids and to also share a ton of laughs in addition to racing. 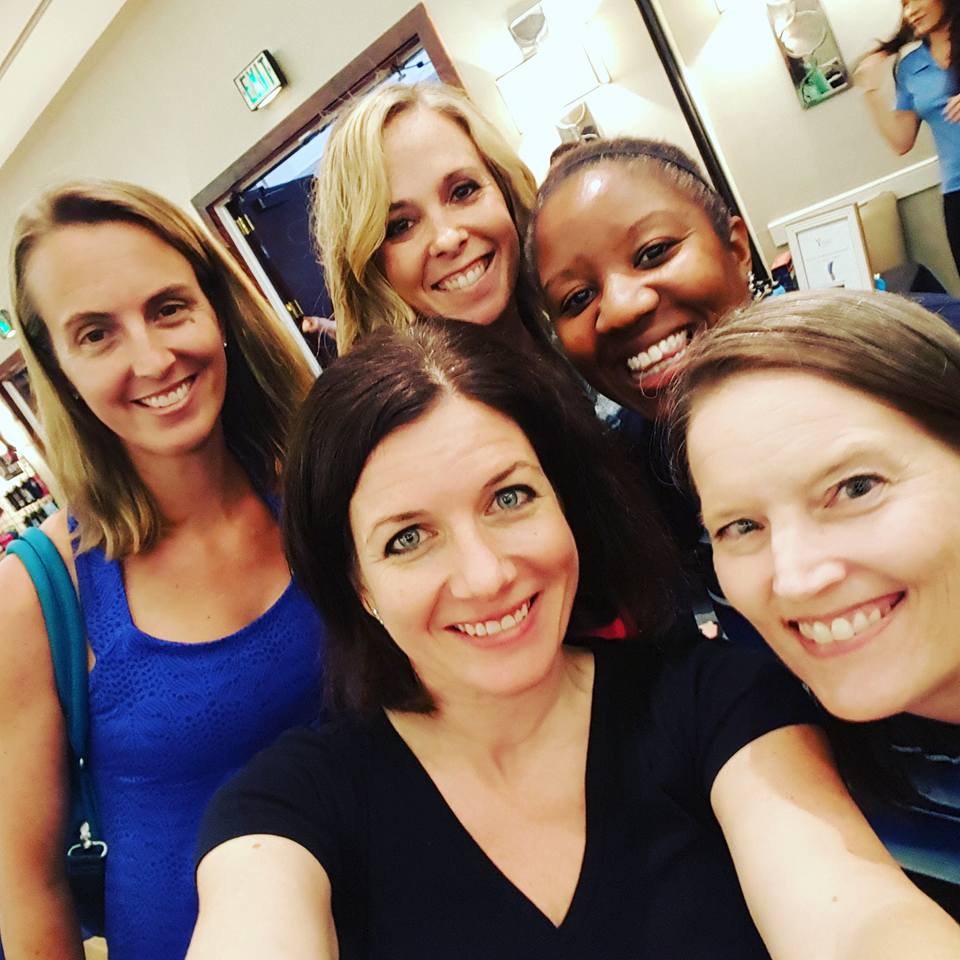 I left New Hampshire and landed in Baltimore and was immediately struck by the humidity as we left the airport. As a New Hampshire runner we rarely deal with humidity so I knew that I was going to be feeling the humidity on race day. Travel worked out perfectly as Cynthia was flying in to BWI at the same time as me from a work trip so we were able to travel together to the host hotel, LOEWS Annapolis, one of the most relaxing hotels I have stayed in (the rooms were spa like!).  We were excited to see our roomies Erika (MCM Mama Runs) and Sue (This Mama Runs for Cupcakes). I have been reading their blogs for a long time and was so psyched to finally meet them in person! Erika and I are fellow Skirt Sports Ambassadors so had planned in advance to twin in our race day outfits with matching skirts (in tantrum) to go with our ZOOMA Ambassador tanks.

After we all met up we checked out the expo and I grabbed a great new trucker hat from the Another Mother Runner booth. At the expo I finally got to meet Courtney from Eat, Pray, Run DC (who later took Cynthia and I out on the town on H street the following evening!). Then we attended a seminar organized by ZOOMA to discuss diversity in running. The panel for the discussion was led by members of DC area Black Girls Run, Muslimas on the Run, and Girls on the Run. The talk centered around ways to encourage greater diversity in the running community, obstacles, and organizations in the running community that promote diversity. 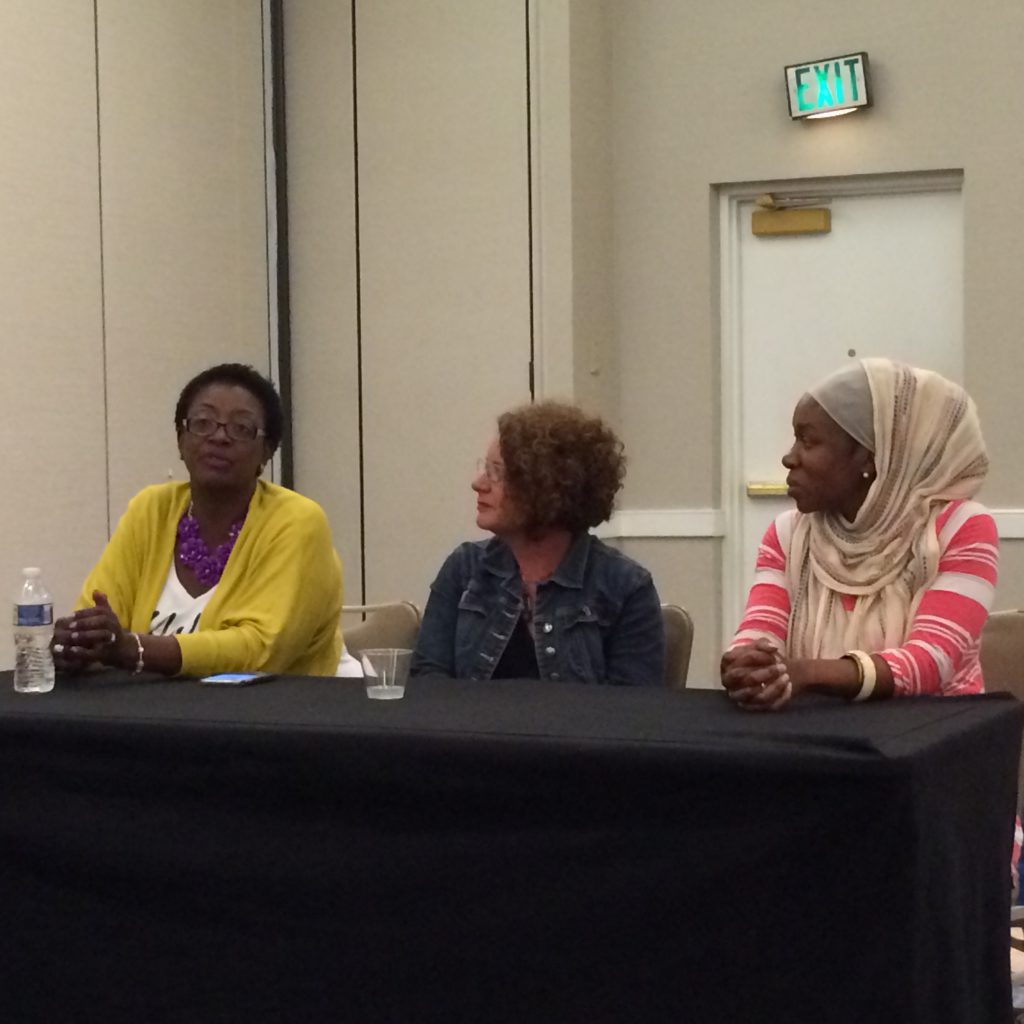 Diversity in Running panel at the ZOOMA Women’s Race Series

After the panel Barefoot Bubbly had a reception for runners however I did not sample any of the wines since I would be running 13.1 miles the next day. And then we had dinner time with some of the ambassadors which was great, lots of laughter and talk about running and blogging. 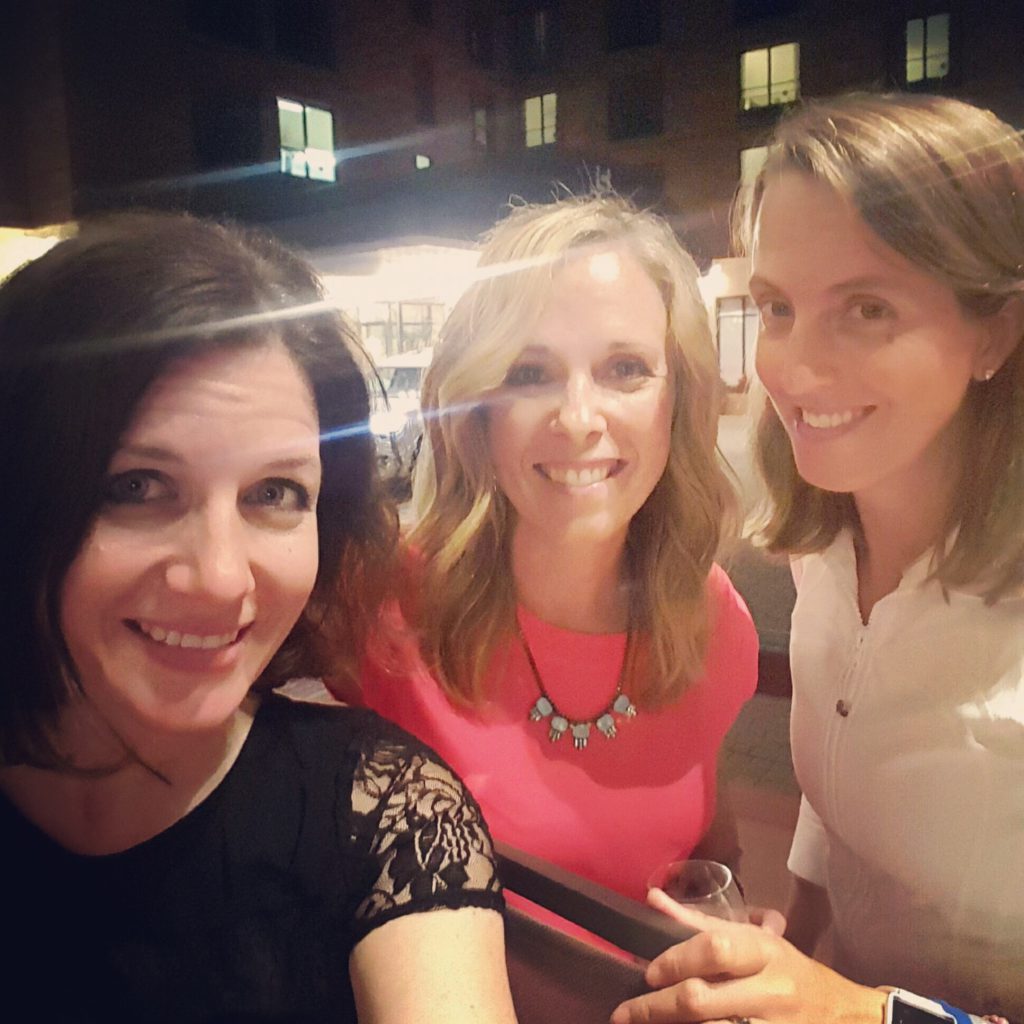 Love these ladies, Cynthia and Sue.

We finally headed to the room to try to get a good night sleep before the race in the morning. As we were getting ready for bed, prepping our “flat runners” for the next day, we realized that we didn’t have any breakfast food. I had completely spaced on brining oatmeal and a banana for my pre-race breakfast. This was a little stressful since I was going to be running 13.1 miles in the morning but thankfully Sue had a Picky Bar to share with me and in the morning we discovered that they had bananas downstairs. With the heat and humidity that greeted us in the morning I actually wasn’t too eager to eat a big meal anyways. 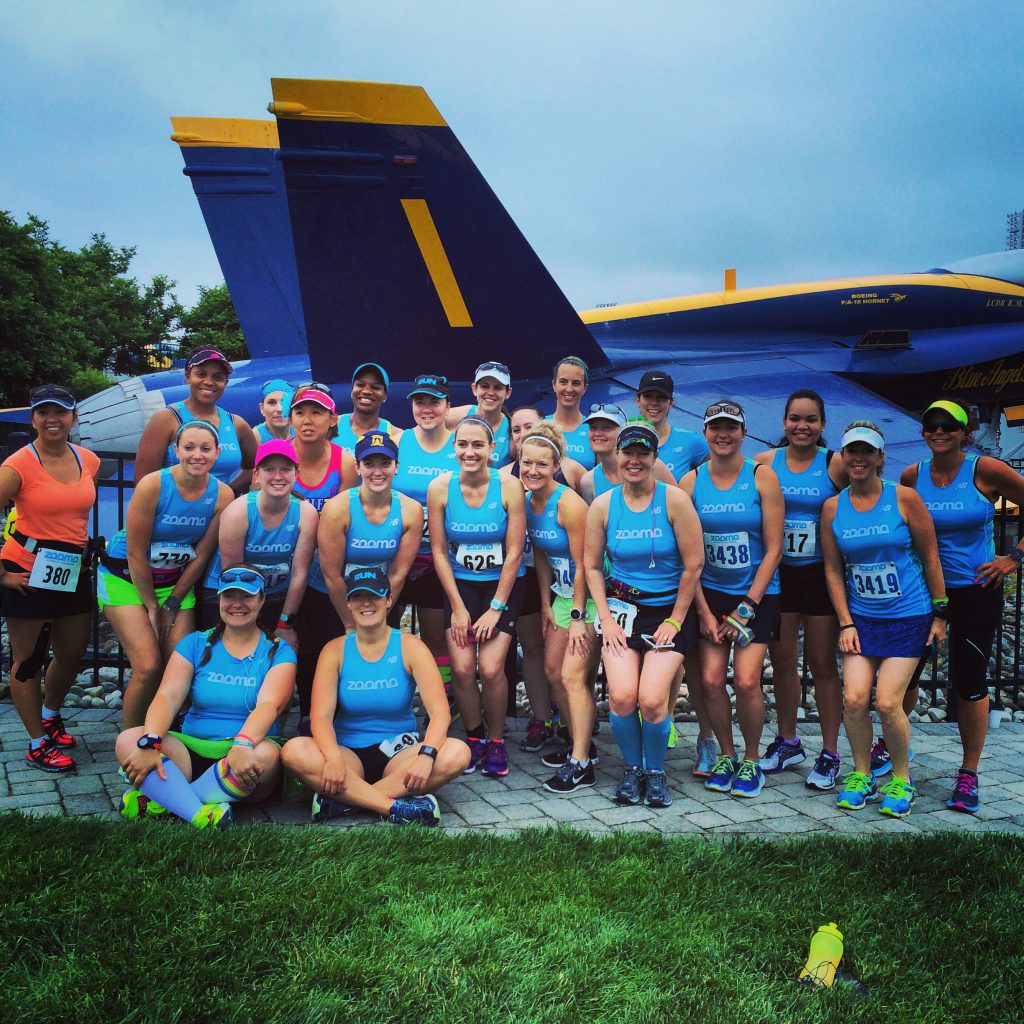 We headed over to the Navy-Marine Corps Memorial Stadium for the start of the race where several hundred other women were getting ready to run either a 5K, 10K or a half marathon. In the heat I was wishing that I was doing a shorter distance but it was too late to switch. A quick couple of pre-race bathroom trips (nerves) and some ZOOMA ambassador pics and it was time to start the race. Feeling confident in my running I hopped the fence and jumped into the corral for the 1:40 Half Marathon pace group (bad decision in the heat!). 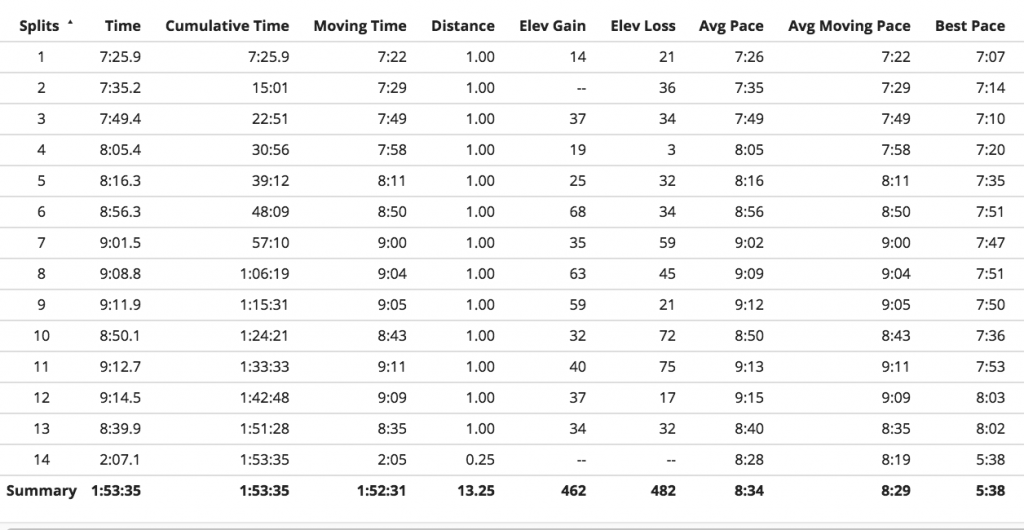 Not an ideal pacing plan!

A few minutes later the starting gun went off and I quickly settled into a pace that I knew would be too fast. Why do I do that to myself? I knew I was running too fast and would regret it but just couldn’t slow it down (bad runner!). Within a few miles the heat and humidity felt stifling and I gradually dropped of my pace. People had talked about this course being hilly and they were right. This was not a flat run by any means. The course was beautiful, winding through the streets of Annapolis, down by the water front, past the state house and the Naval Academy. The course had an out and back section with some tough hills and a funny section where the half marathoners doubled back meeting  up the the 10K runners which was a little confusing (I thought I might be off course). During the race I was so happy to see some of the other ambassadors on the course including Colleen a fellow New Hampshire Girl (Live Free and Run) and Kara (One Redhead and Lighthouses), they were both running the 10K. I loved seeing the throngs of women runners on the course. Did you know that according to a survey in Running USA there are more women runners doing races now then men? There is something powerful about seeing so many strong women getting out there and running. 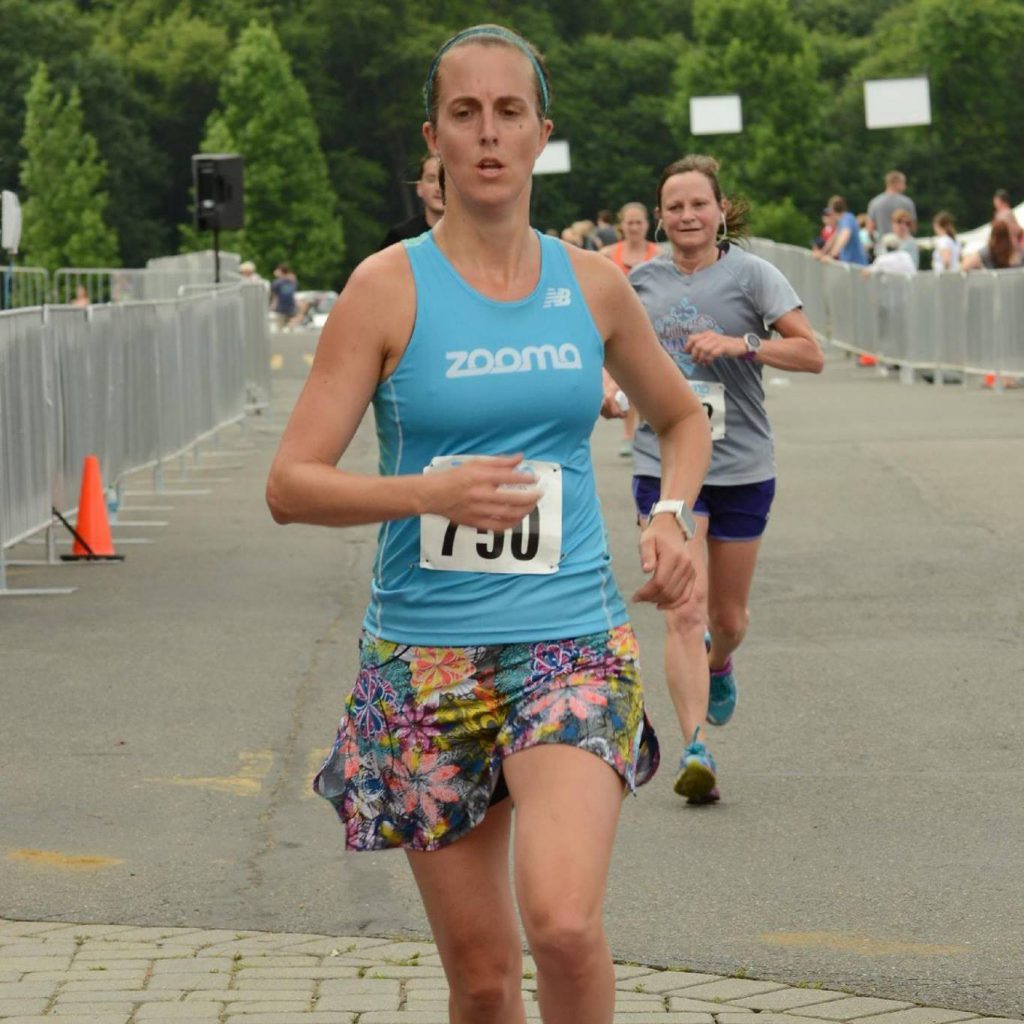 Drenched in sweat and happy to be finished!

Due to the heat I felt like my nutrition was off. It was hard to take in energy gels because they were making my stomach a little funky. I tried to make sure I was hydrated but with the heat this felt hard. I did my best to keep my pace up but the heat was getting to me so I tried not to focus too much on my watch and just worked on running hard and keeping my form strong. 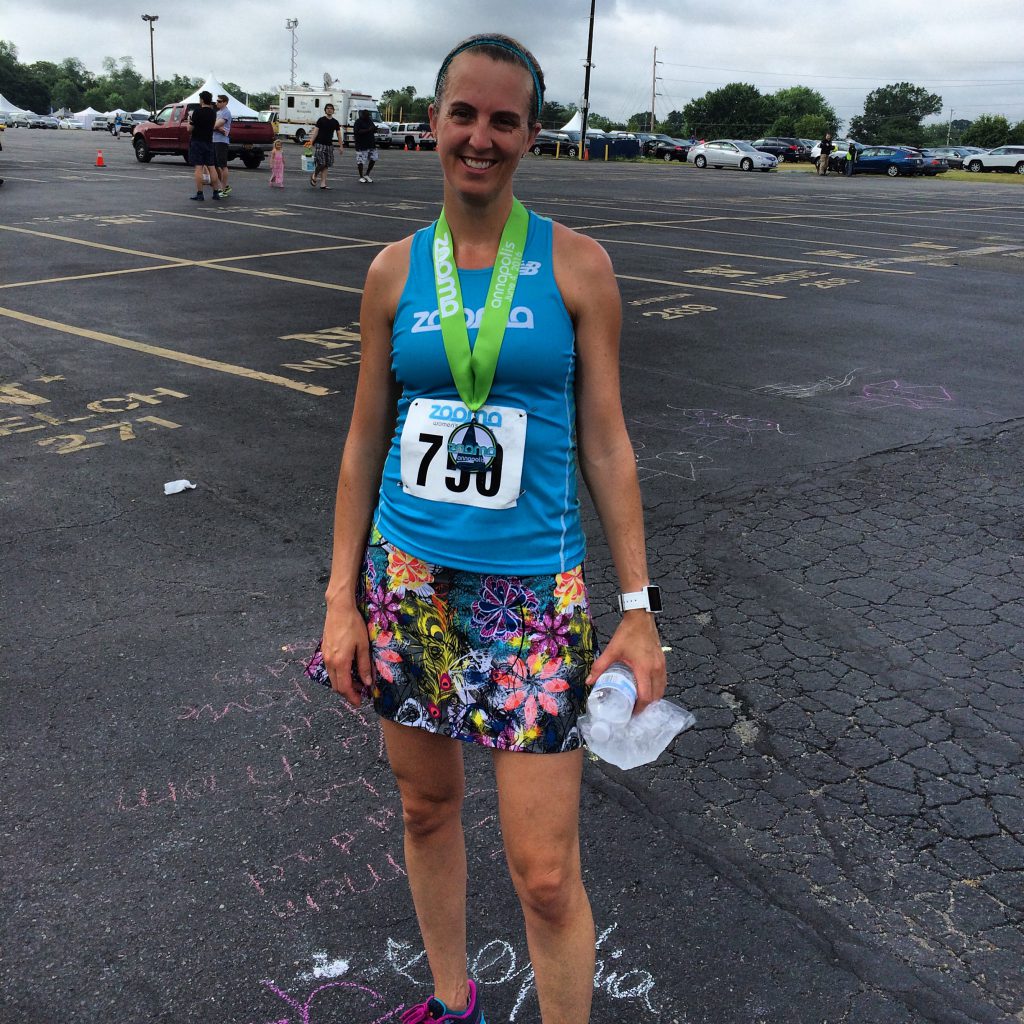 Now that was a hot half marathon!

With one mile to go coming back in towards the finish arch I tried to pick it up a little bit but was really lacking pep in my step. My finish time was 1:53.4, definitely not my fastest enough but good enough for me for a finish on a super hot day!

After the race I felt slightly lightheaded from the effort and the heat so I spent a few minutes sitting with the medical staff with some ice on my neck. After that I cheered Cynthia into the finish and then we headed to the post-race expo for some refreshments (More Barefoot Bubbly) and music. 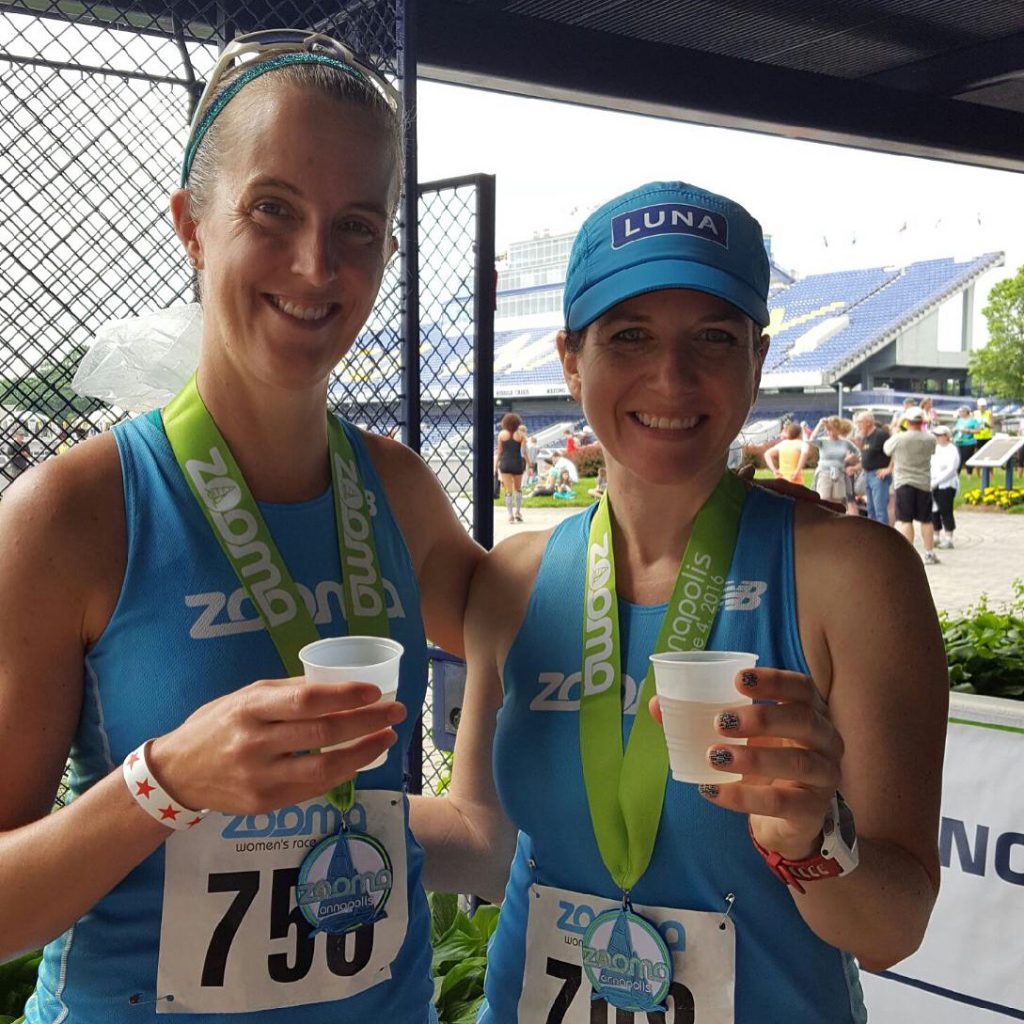 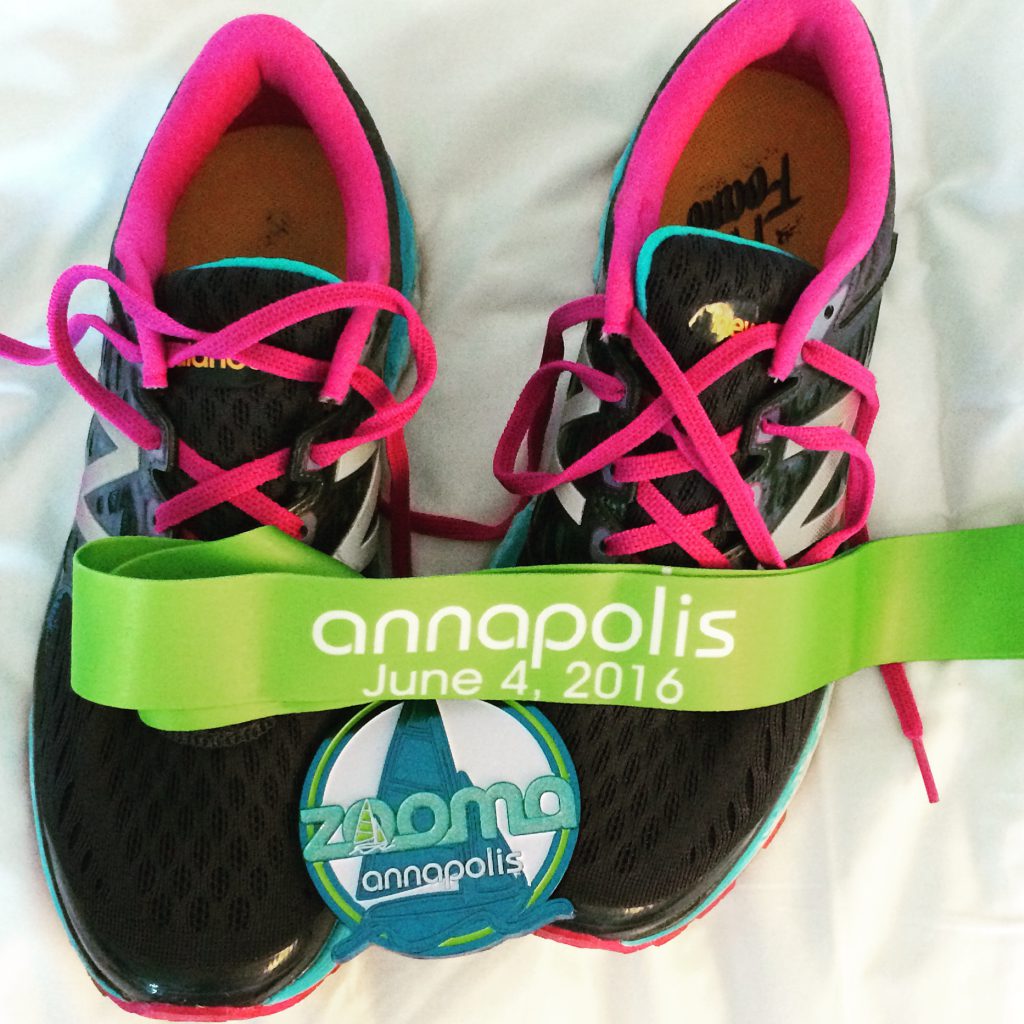 Before heading out of Annapolis Cynthia and I spent some time walking around and looking in some of the local shops and of course we grabbed some ice cream, the perfect post-race treat on a hot day! I had the rest of the weekend to hang out with Cynthia so we spent some time with her adorable kids and also her mom who opened her house for me to stay and then Cynthia took this country bumpkin out on the town in DC. We had fun enjoying dinner out in Georgetown and then met up with Courtney later on on H street for drinks and then amazing late night pie which Cynthia and I enjoyed back her moms with more late night chatting about blogging, running and triathlon. 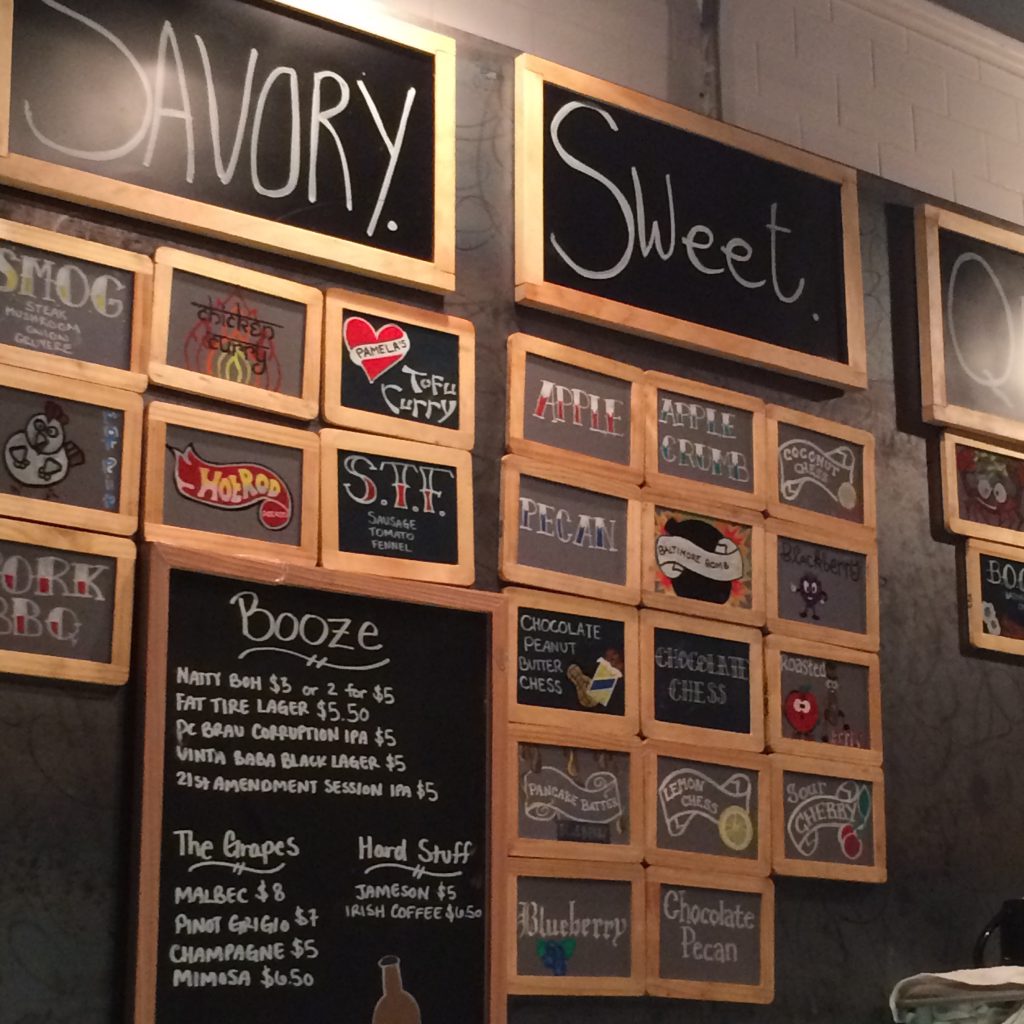 Sweet or savory? Which pie would you choose?

The weekend was capped off with meeting Sue again for crêpes the following day. Overall this was a memorable race weekend and girls getaway.

When was your last favorite getaway or race-cation? What was the hottest race you have ever run? What is your favorite fun late night snack when you are out on the town? 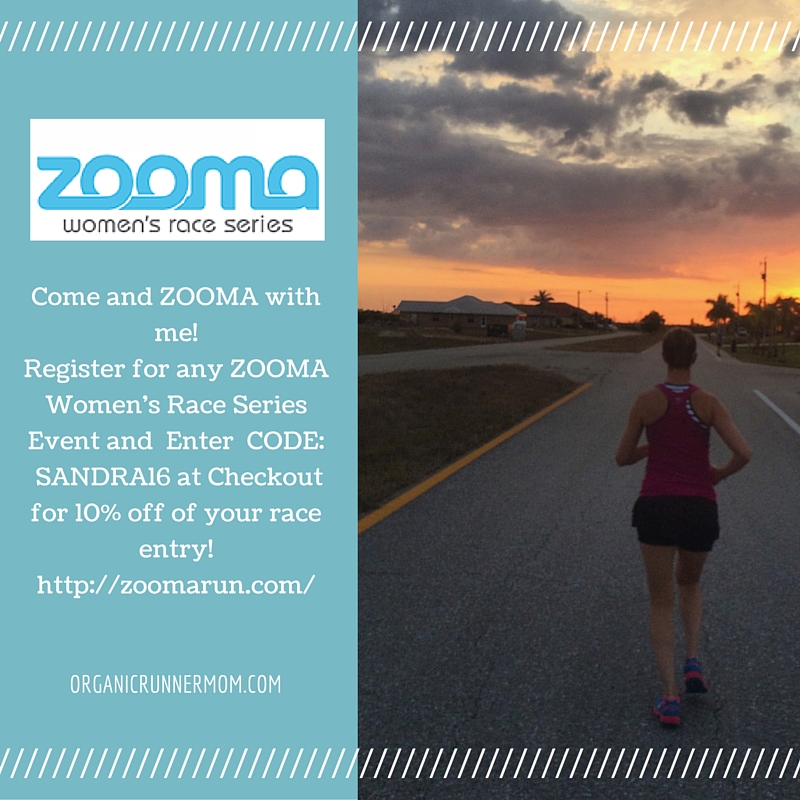