Why you should get a Mammogram. My Story.

Written by organicrunnermom on December 5, 2018. Posted in Health and Wellness, Wellness

Why you should get a Mammogram. My story. 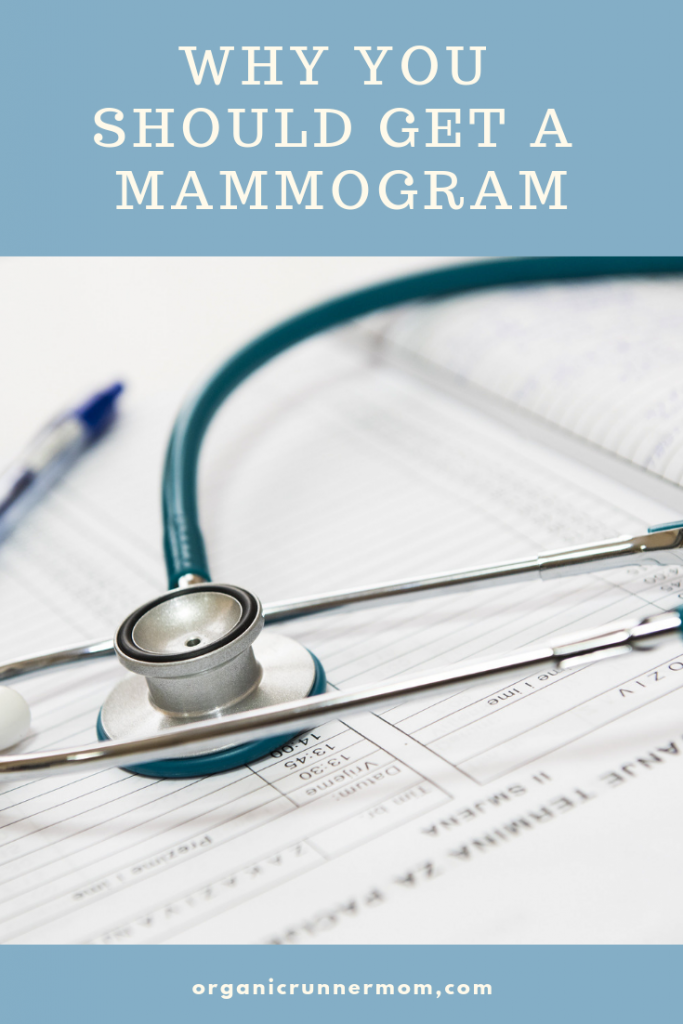 Why you should get a Mammogram

Hi there! So we’re going to get a little personal here on the blog today.

I recently went to have my first mammogram.

My gynecologist had said there are differing opinions about whether to have a mammogram in your 40’s if you have no family history of breast cancer. She had told me that oftentimes women will experience false positives and all of the stress that goes along with it. So we decided that when I was 40 and 41 it was ok to wait to go in and get a mammogram. When I turned 42 I went in for my yearly exam and the routine breast exam didn’t present anything suspicious. Again, my doctor said I could wait on the mammogram if I wanted or this could be the year to get started. I decided that I wanted to go in for my first mammogram just to be safe. So we scheduled the appointment and I put it out of my mind until the day of the appointment.

Many women have made the mammogram out to be terrible. I didn’t find it to be that bad. Other than being cold in the exam room and being a bit uncomfortable the process was quick and pretty painless. The nurse who was taking the pictures was kind and explained everything that she was doing step by step. At the end she explained to me that it is not uncommon for women to get a call back after their first mammogram for more imaging because there is no baseline to compare things to. If things look different left vs right side often more imaging will be required just to be certain nothing is going on.

Why you should get a #mammogram. read @organicrunmom’s story. #health #wellness

So, I went home and about a week passed. I was on the treadmill at my gym when I received a call from the doctor. They wanted to do more images. There were some differences on my left side so they wanted to take more images just to be sure nothing was going on. “Could I come in tomorrow?” the nurse asked. Getting this phone call it was hard not to feel a little panicked. No one expects to get a call back and the fact that they wanted to see me as soon as possible seemed a bit alarming. I agreed to the appointment not wanting to wait and mentally prepared myself. Thankfully I had a friend come with me to the appointment. It is always good to have support and also to have another set of ears to listen while the doctors are talking. When you are stressed sometimes it can be hard to take in all of the information.

I went back and prepared for another mammogram. This time the imaging would only be in the left side and they would need extra images. Once the images were taken the radiologist took a look and then came into meet me. What they were seeing was suspicious for malignancy so just to be sure they now wanted to do an Ultrasound. My head was spinning. The way the radiologist made it sound was that there was a high likelihood that what they were seeing was cancer but more testing was needed. At this point I was in a bit of shock but ready to proceed with the appointment since they had time and wanted to do everything today. There was no sense in waiting and coming back another day. The ultrasound confirmed the presence of something suspicious.

The next step I was told would be a biopsy and if I could stay they wanted to do it right then. Again, I didn’t want to wait and just wanted to get it over with so I agreed to stay and have the biopsy done. To say I was nervous would be an understatement. The nurse was in the room to hold my hand and then there was a radiologist and a breast specialist who came in to oversee the biopsy. Numbing medicine was applied until I could not feel anything and then it was time for the biopsies to be taken. At this point I was shaky and crying. My nerves were on edge. The nurse allowed me to squeeze her hand as I waited for the procedure to be done. They needed to take 3 different samples and would be placing a tiny microchip as well in case they needed to locate the area again. The worst part of the biopsy was the sound. It did not hurt because of the numbing medication but every time they took a sample there was a loud jarring sound of the biopsy tool. The procedure was relatively fast. The doctors and nurse all reminded me how good it was that I had come in for that initial mammogram and not waited as if they found anything it was sure to be early. I was given some ice to apply to the biopsy area and told to take it easy for the next 48 hours.

I was so thankful to have had a friend with me at my appointment. I needed a hug and some reassurance.

Then it was the waiting game. It took about 5 days to get the results. It was hard not to get stressed out over what they would find. I kept telling myself that whatever it was I would be able to get through it and would just proceed ahead as needed even if it was cancer.

I won’t keep you waiting any longer with the results. Thankfully it is NOT cancer!!!!! The doctor who had taken the biopsy called me with the results and told me they had not found cancer just some sort of benign cyst. What a RELIEF!!! They want to see me back in 6 months to recheck everything but at this point that is all.

Despite this being a really intense and stressful experience I am so happy that I went in for my mammogram. If this had turned out to be cancer the doctors would have identified it early and we would have been able to start treatments right away. Going to this appointment was a reminder about the importance of being proactive about your health. Even though I had a scare I would do this all over again and would not wait.

If you haven’t done so and you are in your 40’s and beyond now is the time to get yourself checked out!

Have you had a mammogram? What was your experience like?