More triathlons, the ZFIVE and a triathlon inspired giveaway!

Written by organicrunnermom on October 14, 2014. Posted in Running, Triathlon

Swim, bike, run with the ZFIVE! 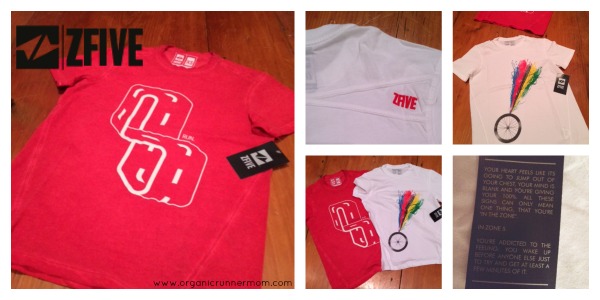 *Disclaimer: I was provided with two t-shirts for my review by the ZFive.  All opinions expressed here are my own.

Remember back in September when I raced my first triathlon (The Lobsterman Triathlon)? Well, I’m hooked and I am already beginning to plan my race schedule for next summer.  The new big goal on my list . . . A Half Ironman. Yes, that’s right, 70.3 miles of swimming, biking and running fun.  I have already signed up for the Timberman Half Ironman which is held in mid-August in New Hampshire.  I am stoked! I also plan to race several olympic distance triathlons as a part of my training leading up to the big 70.3.  Don’t worry there will still be plenty of running too.

With triathlon on the brain and feeling totally inspired after having watched the KONA Ironman World Championships over the weekend I am happy to be able to bring you a great triathlon inspired giveaway. Have you heard of The ZFIVE? ZFIVE is a company that creates triathlon inspired t-shirts for men (with a women’s line coming soon!).  ZFIVE was started by three self-proclaimed endurance junkies.  The name of the brand refers to the 5 Zones of training with ZFIVE being the zone where you are going all out and your heart feels like it might pound out of your chest.

ZFIVE’s triathlon inspired t-shirts first caught my eye on their instagram feed.  Their shirts are custom made, individually dyed, and screen printed. Each shirt has the ZFIVE logo embroidered on the back and bold graphics and colors. I was sent two designs to try in extra-small which fits my frame well and the cotton is super soft.

Now you have a chance to win one of the triathlon inspired ZFIVE t-shirts!  You can also sign up HERE  and get free Wallpapers for your phones with zfive themes.

Please enter my giveaway to win a ZFIVE shirt. This giveaway will run for one week and winners will be announced on my blog and social media sites and notified via e-mail.
a Rafflecopter giveaway
While you are reading this post I’ll be hopping on my bike trying to soak up the last of the warm beautiful fall New Hampshire days before “stick season” starts. 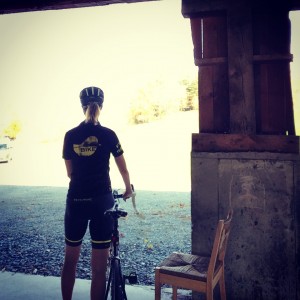 This Dude Girl is going out for a ride. Time to go Free Range!