And there was that time I fell down on my road bike.

Written by organicrunnermom on August 17, 2014. Posted in Inspiration, motivation, Triathlon

My nickname is Clippy. Sometimes I fall down on my road bike and the bike is still attached. 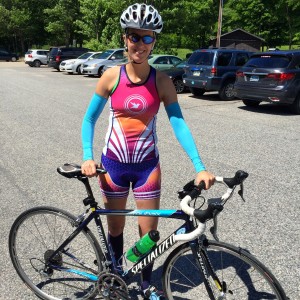 It still makes no sense to my why clipless pedals carry that moniker because your feet are actually clipped onto the bike.  Did I mention that when you are clipped in the road bike is attached to you and becomes an added appendage.  This can have its advantages in cycling by giving you added power on the upstroke of your pedaling once you master how to utilize the power of your quads. Clipless pedals can however be a downfall as well . . . again I repeat, you are attached to the bike!

My bike riding days began back in the days of my childhood, first on a tricycle. I have early memories of riding my tricycle decorated with red, white, and blue streamers on the 4th of July in our little neighborhood parade which ironically was followed by an egg toss (if you didn’t know it already we own an organic egg farm).  After that I remember zooming around on a bike with a banana seat of course. After that I apparently did not spend a lot of time on a bike other than on my “mountain bike” in college which simply served as a form of transport from my dorm to the athletic center for dry-land crew practice. When I moved to New Hampshire some of our new friends were active cyclists so Organic Runner Dad and I decided to jump into road biking and purchased our first road bikes. My road bike (the one I still ride now) is a pretty Sapphire Colored Specialized Roubaix. She is fast and sleek and light. In order to be able to ride with our friends however we decided that clipless pedals were the only way to go. This is when my lack of true childhood biking experience began to show through and the chicken in me came out.  I loved my new bike but I feared being clipped on to my bike.

Organic Runner Dad agreed to teach me how to clip in an clip out safely (but perhaps mocked me a bit for being so timid).  We went to a school parking lot so that I could learn and practice (it was reminiscent of learning how to drive in a parking lot in driver’s ed). I admit I was scared and made Organic Runner Dad hold on to my seat like that of a child learning how to ride a bike without training wheels for the first time.  I may have had a few moments too of temper tantrum like that of a child when I got scared and worried about falling over. For some reason if I overthink clipping out of my pedals I get all discombobulated, completely forget how to clip out and become a wobbling, nervous mess. Needless to say the story got out to our friends and today my nickname on a bike continues to be “Clippy.”

Fast forward to this summer. I have been training for a triathlon with my biggest fear being the bike and not the swim like most triathletes. At the beginning of the summer I had to again overcome my fear of the dreaded “Clipless” pedals in order to become a confident rider on my bike.  As the summer has continued and my rides have gotten longer I no longer fear clipping out although I have the occasional “Clippy” moment.  On my last 40 mile bike ride with friends I was feeling strong and efficient with my pedals however at the end of our ride, perhaps due to fatigue, or just a ditzy moment just as I reached the precipice of a hill I decided to hop off my bike for a moment to wait for friends. Unfortunately I stopped just short of the crest and while I had successfully clipped out with one foot my bike suddenly lost all speed, became motionless and then it was all over. In slow motion I tried to save it but I was going over. I hit the pavement hard, bike still attached.  I was still “Clippy” but I was proud for I did not get scared and just let myself fall and we had a good laugh about it. I have been wearing a private badge of a honor, a giant bruise on my bum for the past few weeks.

Hopefully I won’t have a “Clippy” moment at the triathlon but if I do it is a reminder that I am still new at this.  Biking still feels so new to me and it is such an excellent reminder of how hard new things can be.  Learning can be difficult but it can also be refreshing.

Have you ever had any “Clippy” moments? When was the last time you tried something new?