I am a Spartan! Spartan Sprint Canada Race Recap

We did it! We are Spartans! Spartan Sprint Recap. 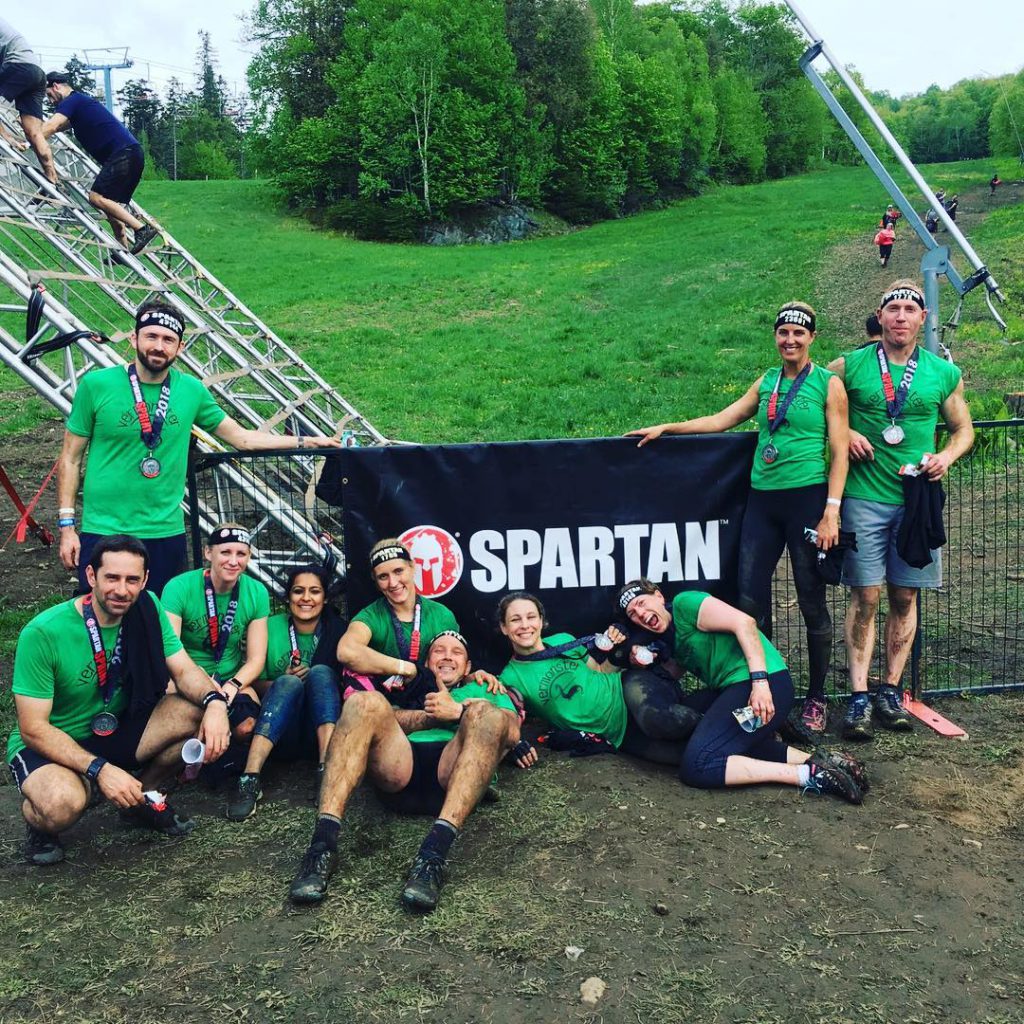 We did it! Our team, the Vermonsters raced the Spartan Sprint in Canada in celebration of our friend Lily’s birthday and it was a blast. To top it all off the weekend was capped with poutine (Canadian goodness, french fries smothered in gravy and melted cheese curds, yum!), a night of dancing at Club St. Michel and a day to recover at Spa Bolton (hello Eucalyptus steam room, thermal baths, cold plunge in the river, and massage!)

But I digress, let’s get back to talking about the race . . .

We got up on Saturday morning to enjoy a breakfast of scrambled eggs, slow cooked bacon (translating from farenheit to celsisus on an oven is apparently trickier than originally planned), French Toast and of course Tim Horton’s coffee because when in Canada . . . We ate in our friend’s hotel suite in our super cool French Canadian Hotel Espace 4 Saisons. We all got suited up for the race ready to get muddy because the rain was steady, wearing our green Vermonsters T-shirts for Lily’s 40th birthday and Paul in Olivia’s spandex (which led to many jokes) because what do you do when you forget your spandex? You wear your wife’s of course. It was in the 60’s and raining which thankfully let up before the race although not before making the race course into a muddy mess. We were not starting until around 12:30 so many racers had already tackled the mud so it would be super slick for us. Heading to this race was fun because we planned to stay together as a team in celebration so this race was not about time but about having a blast and challenging ourselves on the obstacles. 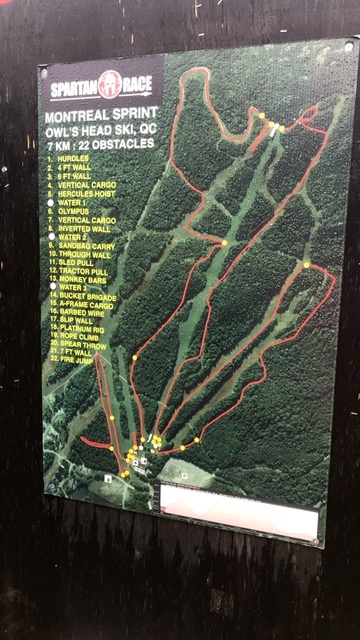 The race course and obstacles!

The Spartan Race was at Owl’s Head Ski Resort in Québec, Canada. The mountain has a height of 2,451 feet which we tackled 2 and a half times including the 20+ obstacles. In all the course was 7KM and let’s just say this was a mountain challenge so I was very thankful to have experience with mountain and trail running. The climbs were significant and challenging enough without adding in obstacles and lots of mud. We lined up at the start and did the Spartan cheers, “Aroo, Aroo, Aroo!!!!” 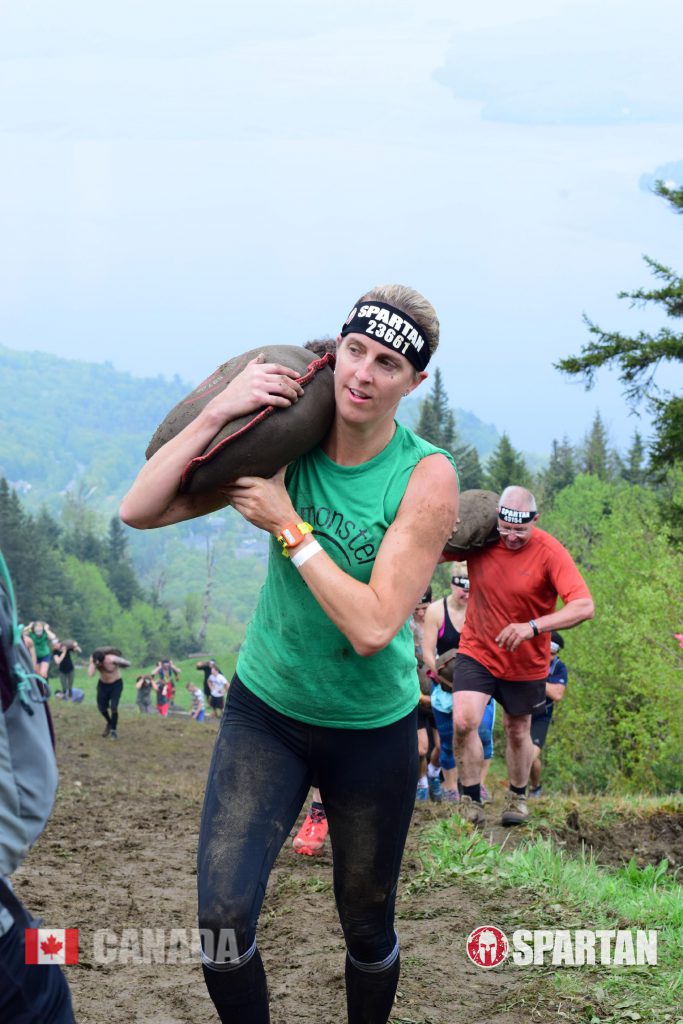 Sandbag carry at the Spartan Sprint

After climbing over a wall to get into the starting corral and then we were off. The course began immediately with a mountain climb/run/hike up, up, and up, and then there were some walls, 4 feet, then 6 feet and I was psyched to make it over both with now help and now have the bruises to show for it! The race continued with more obstacles including the Hercules Hoist, a Vertical Cargo net, inverted wall and a sandbag carry which was made extra tricky by the mud. I was thankful to be wearing a pair of super grippy Hokas because otherwise navigating through the mud might have been super tough. The descents tricky because of the mud and you had to navigate extra carefully or you would end up sliding on your feet then your butt. One guy said, to heck with it and just launched himself downhill into a mudhole (Bold!) 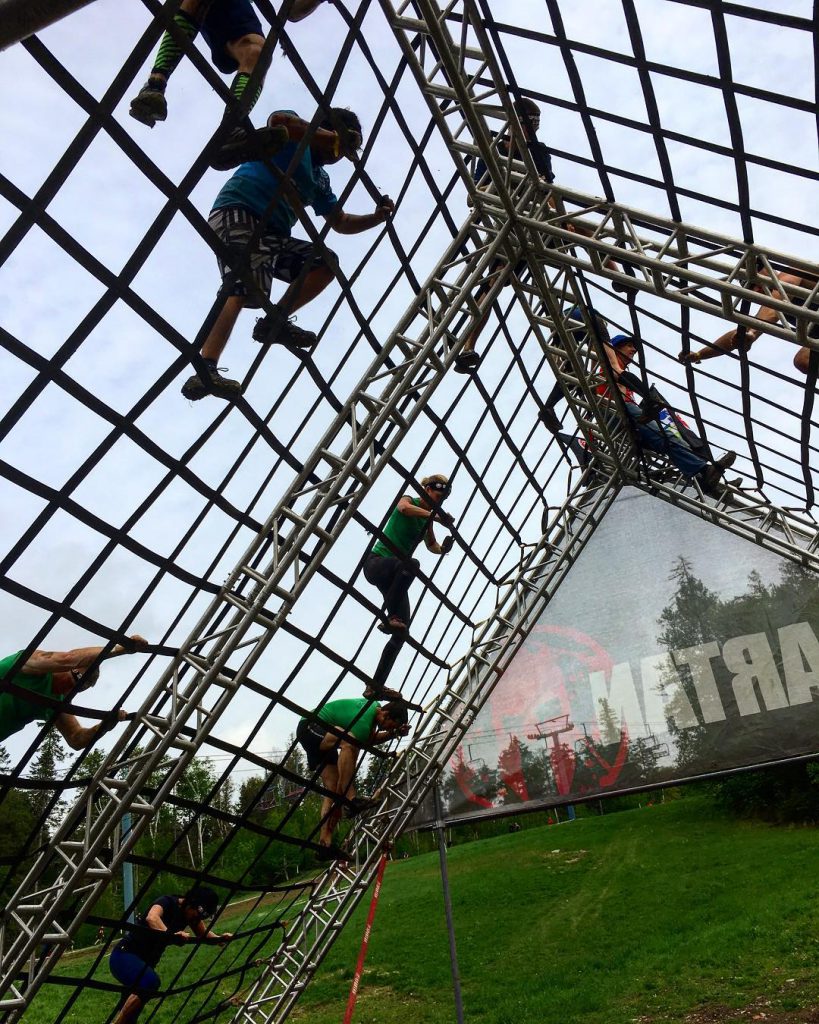 Climbing over the A-Frame Cargo net

The 2 obstacles that I am the most proud of for navigating and successfully completing are the monkey bars and the Platinum Rig which included rings. Upon seeing them at the start of the course I figured these would be obstacles that would be too tricky for me which would necessitate completing 30 burpees instead but I did them! I just went for it and relied on my strength from CrossFit to get across. I am also proud of making it over the cargo net A-Frame which is very tall because in the past the height of something like this would have made it too scary for me to navigate. The obstacles that I missed were the javelin throw (missed the target) and the rope climb. I just couldn’t remember rope climbing technique from CrossFit so now it is a goal of mine to really learn how in case I do another Spartan and have to do it again! 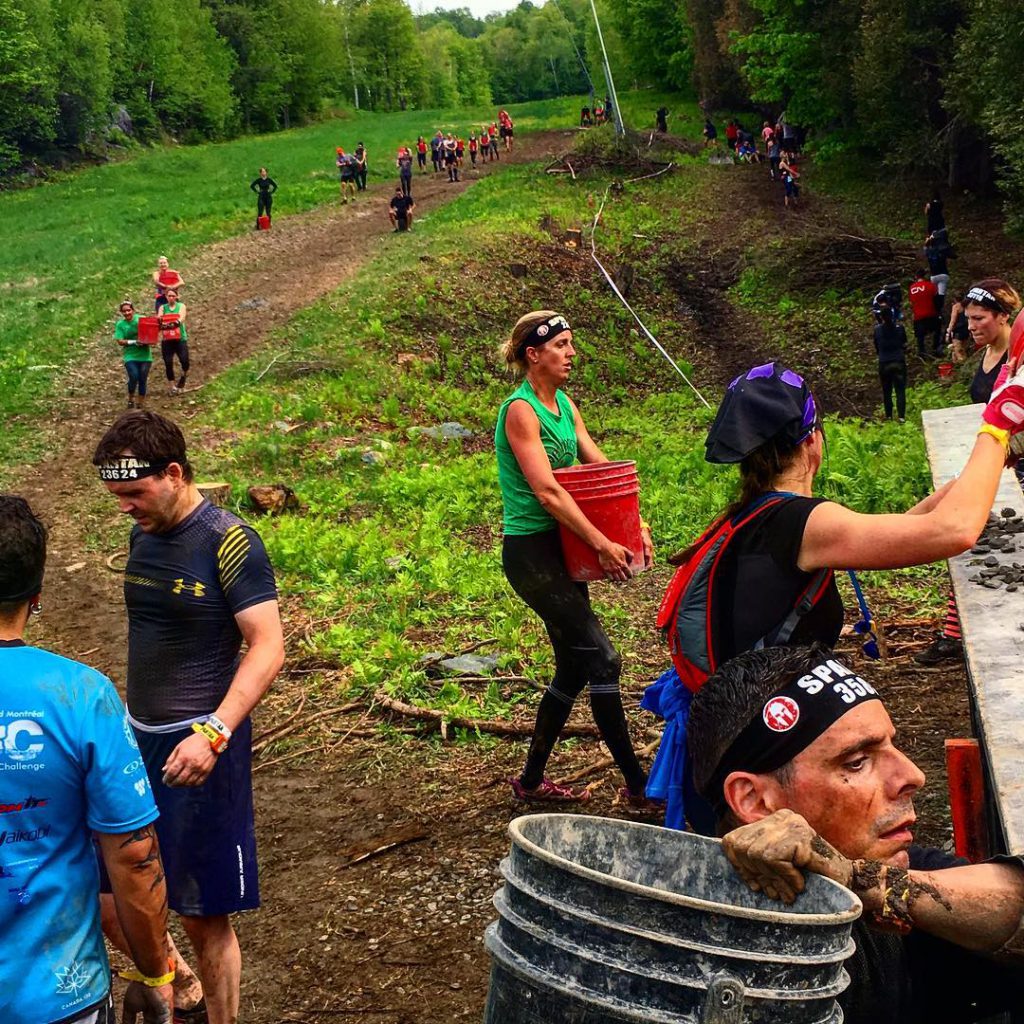 Towards the end of the race we also had a bucket brigade (think carrying a bucket full of rocks uphill then downhill), barbed wire crawls and a jump over fire at the very end which we completed as a team. The Spartan Sprint was awesome and truly no joke and I consider myself to be in good shape. The mountain climbs and descents combined with the obstacles makes this event truly challenging and we didn’t even race it quickly. If I were to race again I would definitely carry a hydration pack as there are not many water stops and I would carry some fuel to carry me through. since we started around noon, by the time we finished I was starving! What a blast the race was though especially because it was with friends and we all cheered each other along on the way and there was a lot of laughter too! 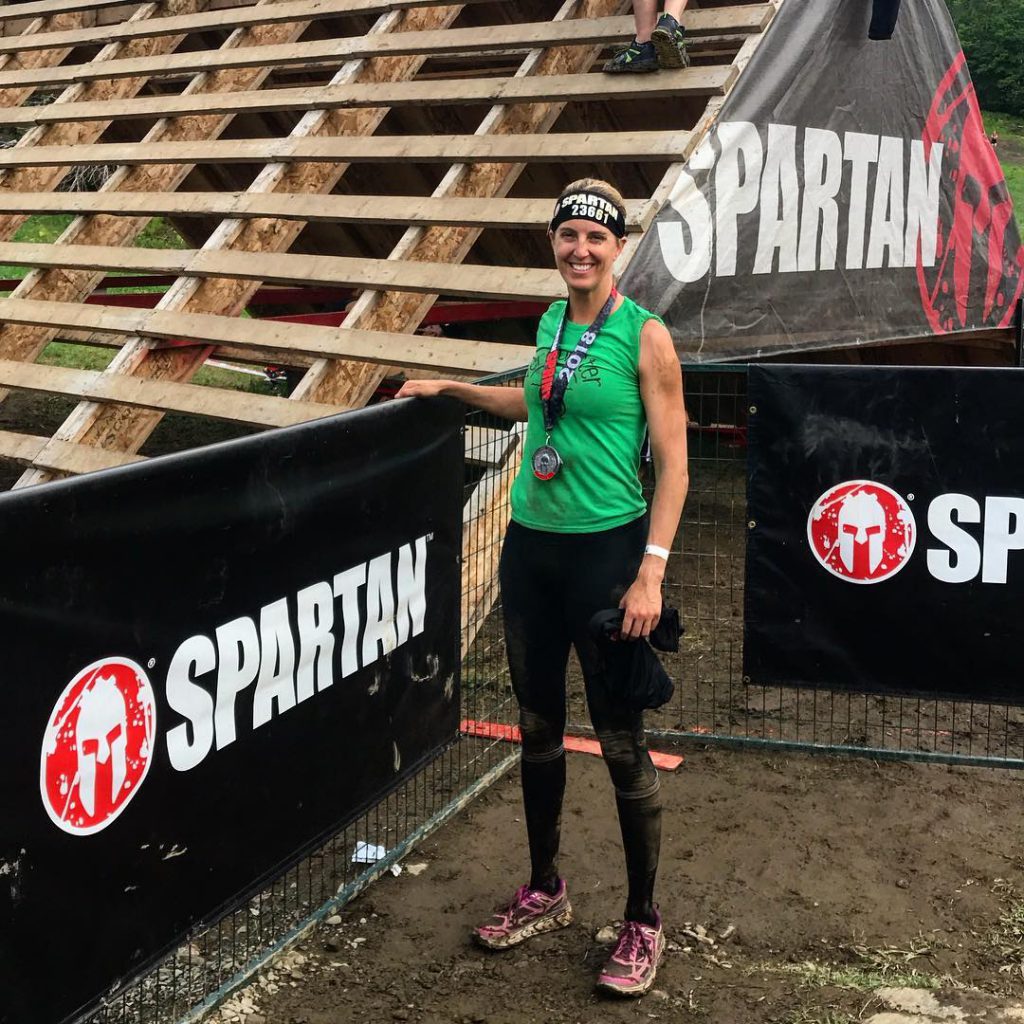 I am a Spartan!

So if you were to ask me if I would do another Spartan Race, the answer is definitely yes even with all of the post race bruising and soreness.

Have you ever raced a Spartan Race? Which distance?