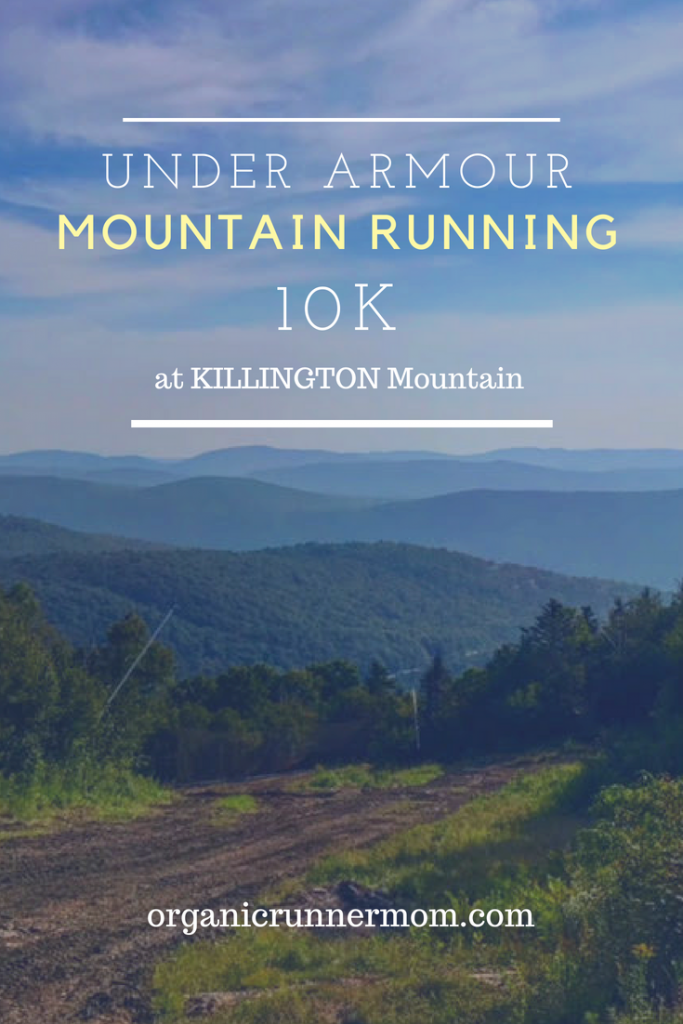 The fog greeted me at 5:30 a.m. when I headed out in my car to drive to Killington Mountain. It was the morning of the Under Armour Mountain Running Race Series at Killington Mountain in Vermont and I was ready to run the 10K. I had laid out my outfit the night before (#flatrunner style), a Skirt sports Running Skirt as always, an Under Armour Tank, Crazy Compression Socks, a, Headsweats Visor (which I ended up not wearing), and a pair of Hoka One Ones (I knew the terrain would be rocky/uneven and I like the soles on these for that type of terrain). Despite the fog it was a beautiful morning, cool in fact for the first time in a long while this summer. Pretty nice for racing weather if you ask me. 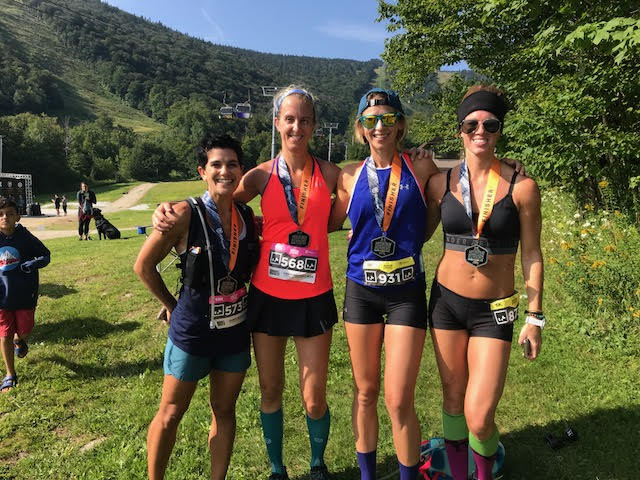 It took about an hour and ten minutes to get to Killington where I would meet up with my running/blogging friends, Allie (VitaTrain4Life), Sarah (Run Far Girl), and Crystal Seaver. We also ran into Holly (running with LOLZ) who was racing the 25K. Sarah and Crystal were taking it easy in the 5K due to other races on their schedules and Allie and I would be racing the 10K. Registration was easy and organized and I was psyched to get a nice Under Armour Long Sleeve Hoodie with my race number (this may become a new fall favorite layering piece). After I registered I quickly found Allie and met her husband and awesome twin boys who were there to cheer on her race. We hung out and chatted with and Crystal until it was time to race.

Crazy climbing and speedy downhills at the @UnderArmour Mountain Running 10K. Check out my race recap! 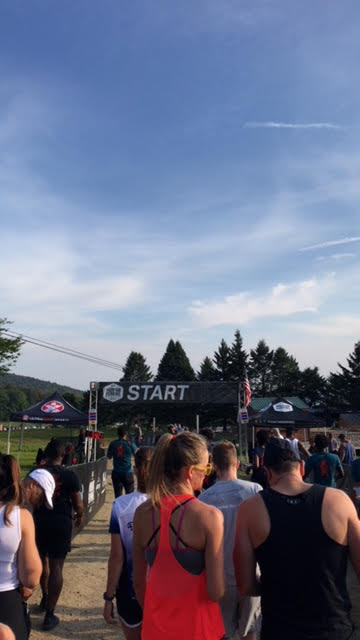 Ours was the third start after the 50K and 25K. I was relaxed and planning to get out onto the trails to enjoy being in the woods with no specific race goals in mind. All of the racers milled around the start, no one wanted to move to start. Finally it was time to go and the gun went off. I quickly settled into a nice pace, the first two miles of the race offered rolling downhills and lush green trails through the woods. I felt relaxed. But then reality set in that this was a mountain race as the nice gentle downhills rapidly changed into a climb. 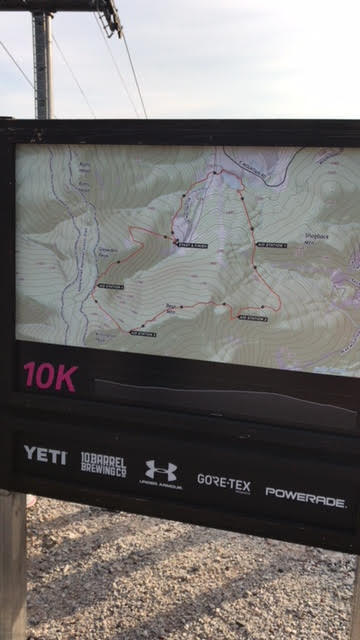 The elevation would continue to gain from about mile 2.5 on until mile 5 for a max elevation gain of 5,329 feet. My pace slowed significantly and at some point speedy Allie passed me. I alternated between running and speed hiking depending on the terrain. Every time it seemed as though the climb was done it was time for more steep climbing. My legs were on fire but the views were spectacular! I had worn my hydration pack on the run which probably wasn’t needed as the course was well supported with aid stations. Each aid station offered a variety of things for the runners since there were also 50K and 25K runners on the course. 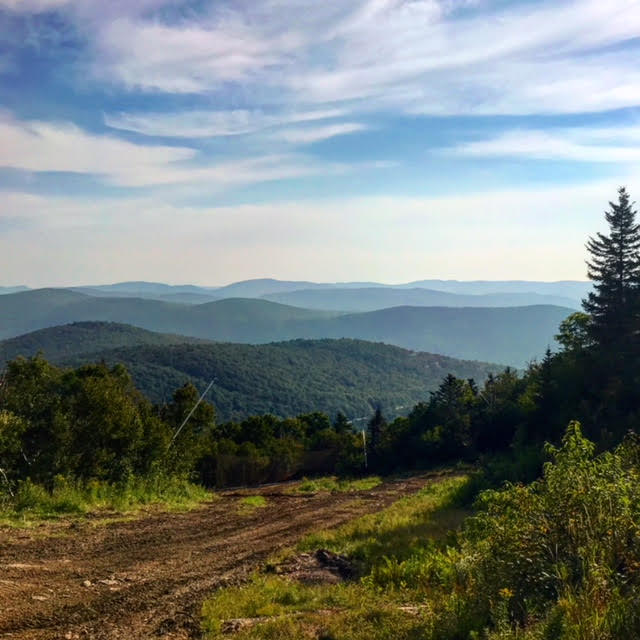 Views from the Top

Just when it seemed as though the climbing would never end we finally reached the peak. Then it was time to descend. I am not sure which is worse the uphill or the downhills because . . . OH MY QUAD! The downhill was a little tough being that it was on the mountain access road in some parts and there were a lot of ruts and loose rocks to watch out for. The downhill was such a relief for the lungs and I tried to relax into it. I was pleased because I actually passed two women who had passed me earlier in the race. Finally you could hear the cheering, the music and the announcers at the finish line. I picked it up a little and headed in to the finish. My finish time was 1:18.09. This was good enough for 2nd in my age group just behind my Allie! I was also 11th out of 103 women in the 10K. This was definitely not my fastest mountain race by any means but I am very happy with my results. This gives me a good idea of the work I need to do to build back my endurance. 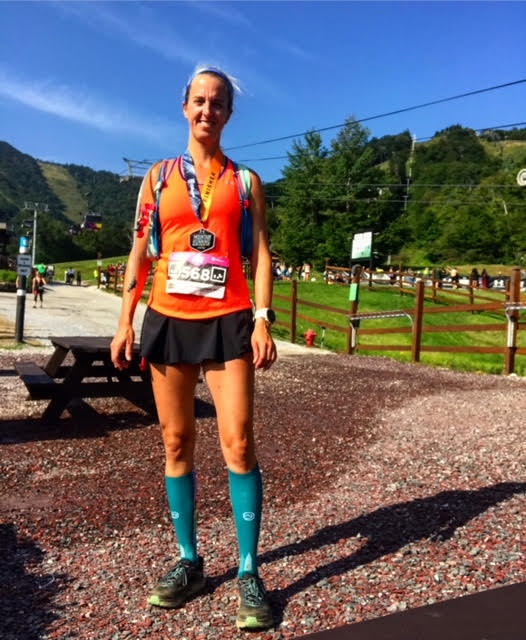 2nd place in my age group. I’ll take it!

The Under Armour Mountain Race at Killington Mountain in Vermont is definitely a race that I would recommend. This race was well-organized and lived up to the challenge of other mountain races that I had attended. In all 4 races there were over 700 participants. The race venue is gorgeous and the race course did not disappoint. The best part of the race were the runners especially because I got to see 3 of my most awesome running/blogging friends!

Have you ever raced a mountain race? What distance?