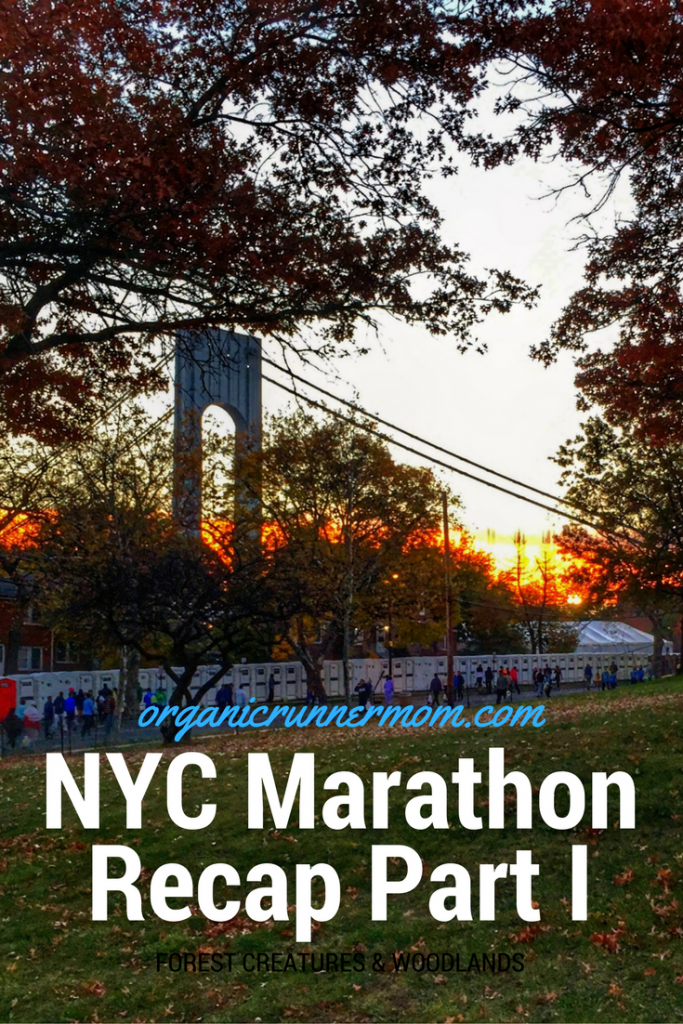 In the crowded TCS NYC Marathon expo I was stunned by the sheer number of people. Having run the Boston Marathon 3 times before I have experienced the large marathon experience but this one feels bigger not only in the sheer number of people (21,000 more runners) but also because in the expo hall many of the people that I heard were not speaking English! This marathon is very international with runners traveling from every corner of the globe to  run in New York City. I even had the chance to meet two young runners from Russia one of whom is co-organizing a half marathon. In our hotel it seemed as though every runner from France had descended on the Big Apple to run. 132 countries were represented in the marathon this year For more NYC Marathon by the Numbers check out this great post from Run Karla, Run). It is truly awesome to see how the sport of running brings together so many different people from all over the world. 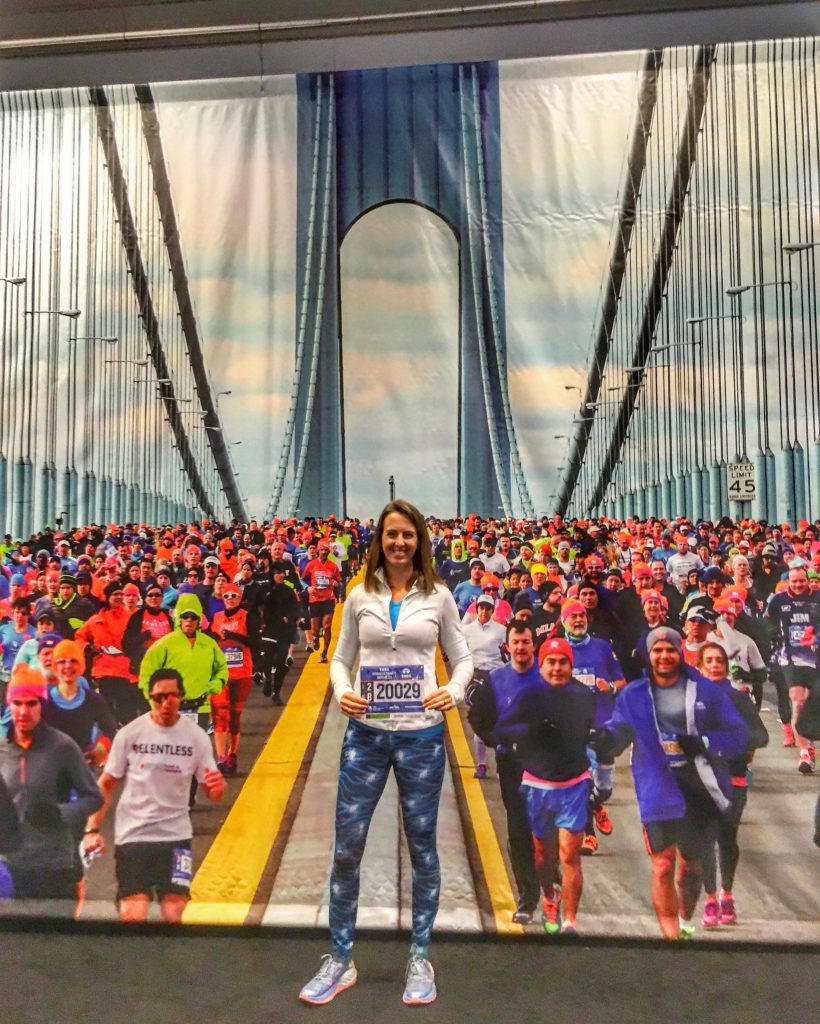 While I was at the expo I of course splurged on some New York City Marathon gear because I don’t already have enough running gear at home (ha! My husband would definitely disagree with this statement). I always enjoy seeing what new gear is available to runners. The one thing that the triathlete in me did drool over was a lap pool that was set up in the expo. Wouldn’t it be great to have this as a training tool for swimming and for swim analysis . . . (obviously my mind is currently thinking to my upcoming Half Ironman events this summer!). While lapping the expo I finally had a chance to meet Editor in Chief of Runner’s World Magazine Bart Yasso (also creator of the dreaded Yasso 800’s workout). Bart is so friendly to all runners and glady took a few minutes to chat with me. He was at the event signing his book, My Life on the Run: The Wit, Wisdom, and Insights of a Road Racing Icon 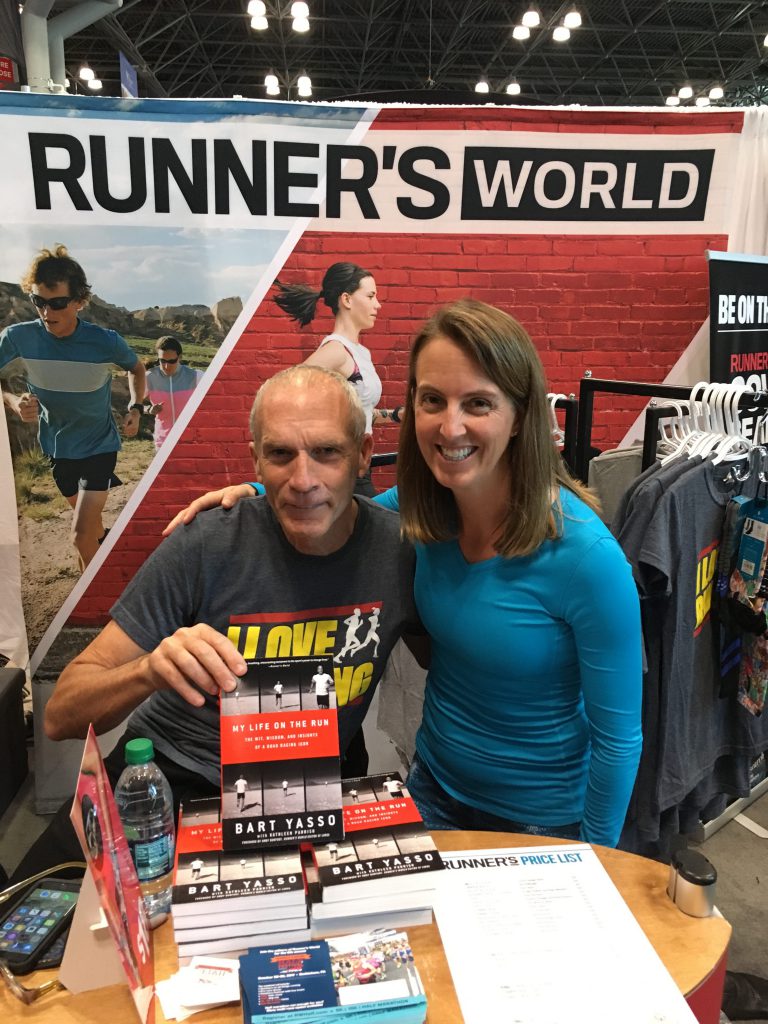 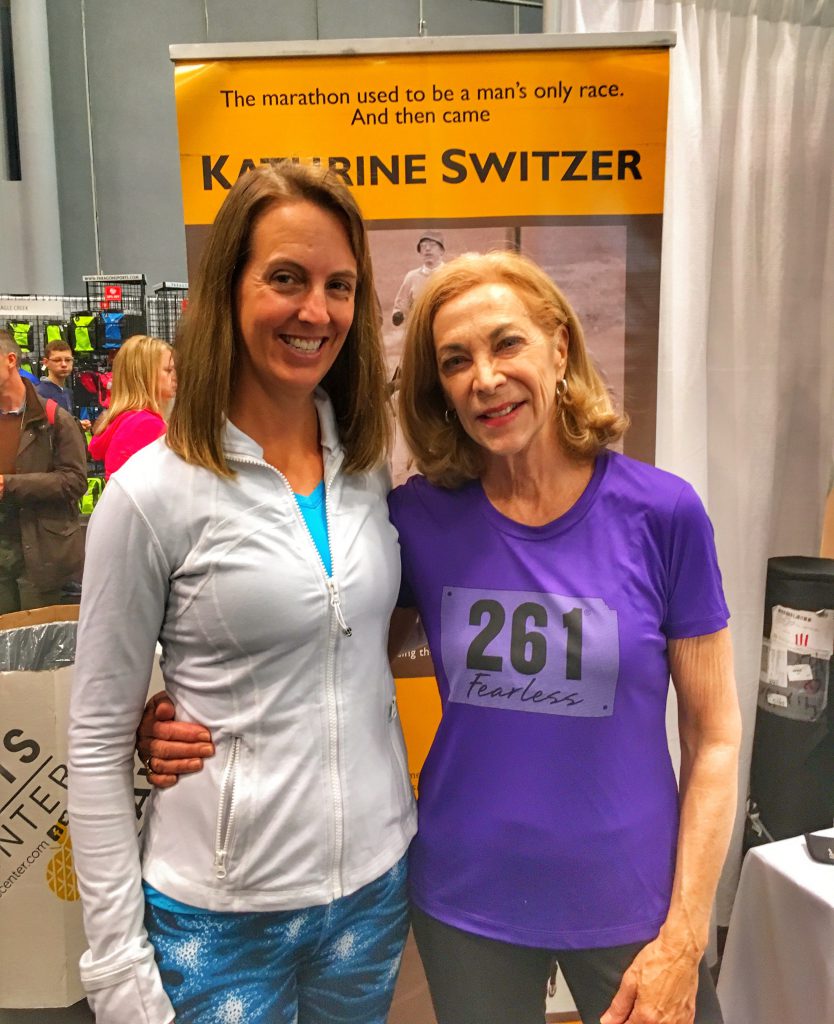 Here is a little bit more info about this amazing opportunity to Run the Boston Marathon with Kathrine Switzer and  261 Fearless:

“As a celebration of this 50th Anniversary of Kathrine Switzer’s historic run, we gratefully announce that the Boston Athletic Association has granted 261® Fearless a limited number of invitational bibs for the 121st Boston Marathon®. . . By joining us, you also can be assured that your contribution will pass on her legacy of empowering women globally through running with the 261® Fearless non-profit organization”

To apply for this incredible opportunity and to find out more about how to apply head on over to 261® Fearless. 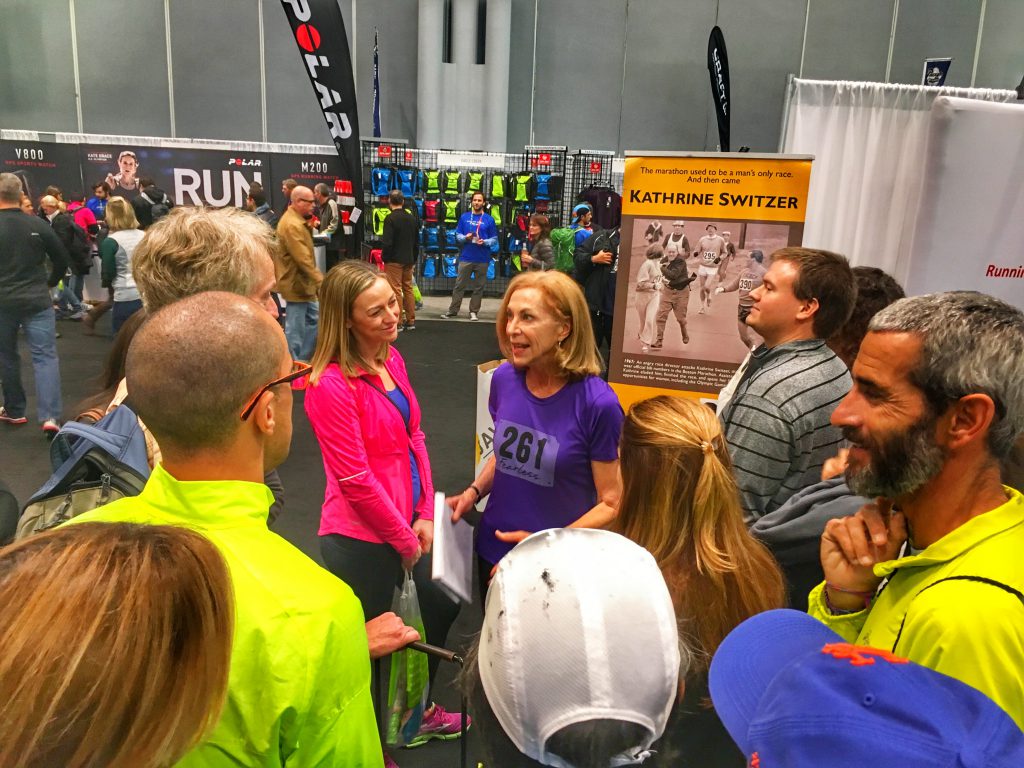 Kathrine Switzer speaking to runners at the NYC Marathon 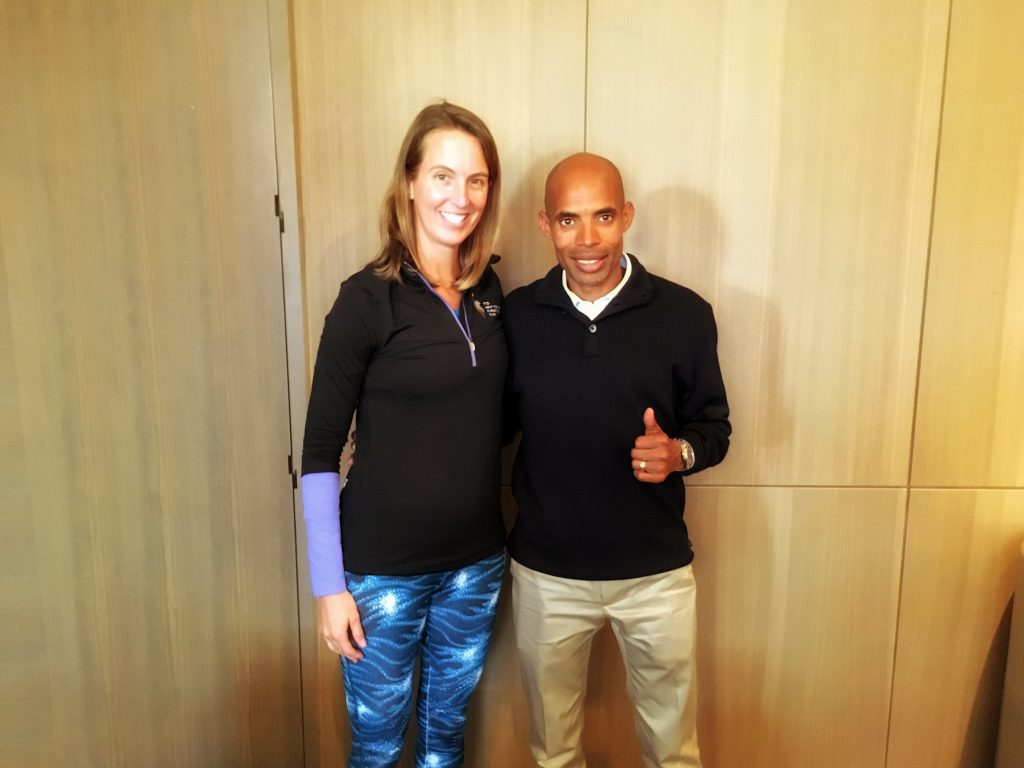 As if the excitement of meeting Bart Yasso and seeing Kathrine Switzer again wasn’t enough, I had been invited to an small Facebook Live Taping with Meb Keflezighi and 9 other running bloggers by one of Meb’s sponsors Generation UCAN.  At the event we were given a chance to learn a little more about fueling with Generation UCAN a superstarch that is a natural, slow-releasing carbohydrate keeps blood sugar stable and delivers steady energy for your brain and body. 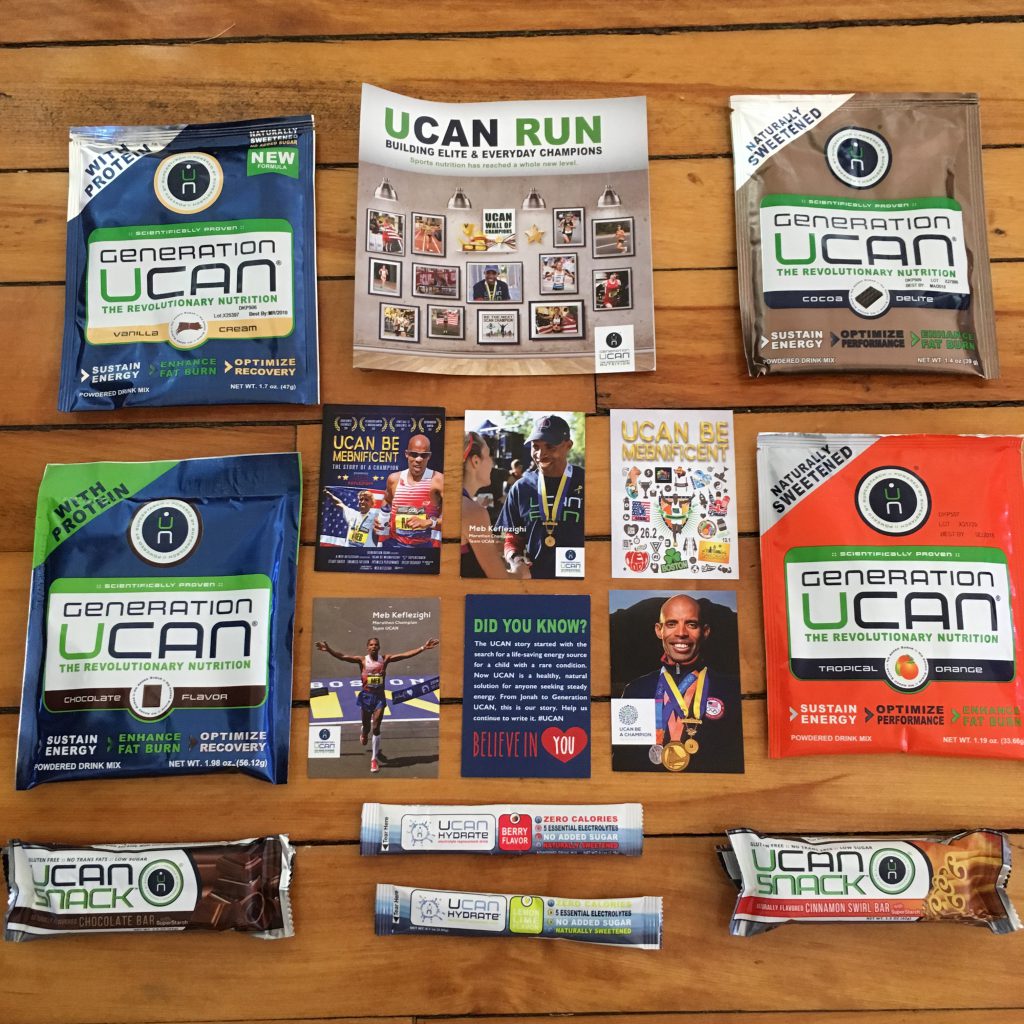 We were also given a chance to meet Meb and to chat with him before the race. I have to admit I was star struck. Meb is a super star in the world of marathoning. He is an important figure in American running not only because of his running success story but also because he is so down to earth and relatable . . . and he is in his 40’s! GO MEB! Meb focuses much of his time on his running and training but his family also comes of great importance for him as well. I will still never forget hearing that Meb had won the Mens Boston Marathon in 2014, the year after the bombings, a truly uplifting moment for Americans everywhere who were need of an American hero. Listening to Meb speak about his own experiences running filled me with excited inspiration for my own New York City Marathon. Don’t miss next years New York City Marathon as it will be his 26th and final marathon!

Definitely head on over to Generation UCAN to see the taping of this great Facebook LIVE event where Meb talks about racing  the 2016 NYC marathon and more! 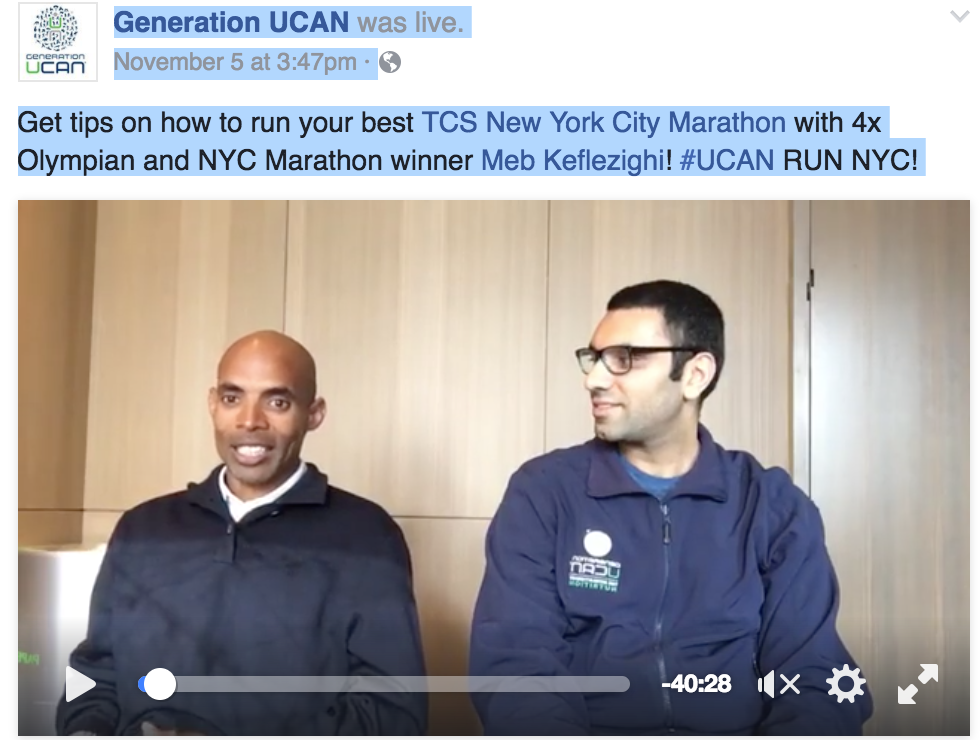 This was such a memorable day for me and one that I will never forget! So much inspiration to be found. This day left me feeling super stoked to run the marathon! Coming soon be on the look out for my race recap!!!

Who is your biggest running inspiration?