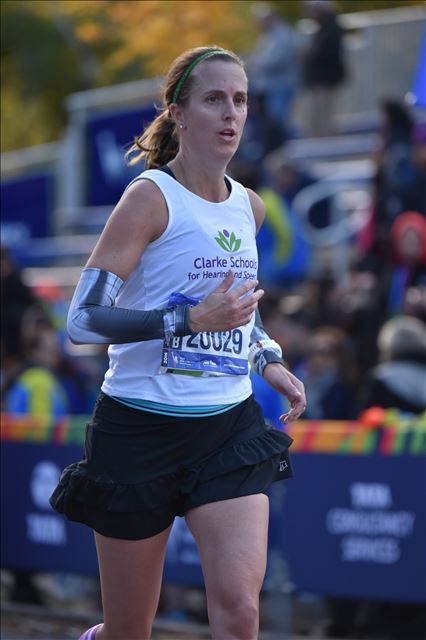 Laying in the medical tent again at the end of the marathon was not where I had hoped to end up. This was not my first trip to the medical tent after a marathon either. Out of the dozen or so marathons that I have run including a handful of trail marathons this may have been my 5th time. The fact that I have lost track of how many times is not good. It indicates that there may be a problem with me and the marathon. I knew my family wouldn’t be happy and rightly so.

Before I had kids I jumped into marathoning and became hooked. You run one and oftentimes when you finish you think, “I will never ever do that again, it was painful and horrible.” But then like so many of us you sign up again and convince yourself that it will be different. Before I had kids I didn’t know as much about  running marathons as I do now. I did not use a running coach and I used training plans off the internet. I hoped to qualify for the Boston Marathon but never fully put in the work to get there. The toll that a marathon takes on my body is hard. I had had several trips to the med tent at the finish for dehydration and my husband made me promise to run only shorter races. He was worried of course. So that’s what I did for a bit, focusing on half marathons and I even rowed twice  in the Head of the Charles again with the Colby College Alumni Rowing team. However, after having kids and battling serious post partum depression, I had the itch to try the marathon again and now I was really hungry to qualify for Boston. I needed that big goal. Something to focus on. I needed something to focus on to help carry me out of my depression.

My struggle with marathons and a decision about racing in the future. #runchat #womensrunning

Now fast forward to today. I have qualified for the Boston Marathon 3 times, have run it twice as a qualifier, once with Team Stonyfield and now will run as a qualified runner again this spring. I am thankful for the amazing opportunities that I have had to run this exceptional race. It looks like the Boston Marathon this spring may be my last full marathon out of caution in considering my own personal health and well-being. This is a tough decision for me but taking care of myself for me and my family is of huge importance. I ended up in the Med tent again after the finish of the NYC Marathon this year. After the finish my body just kind of crashed. I could feel it happening towards the end of the race. All in all I think I burned through 8 GU packets, a Clif Organic Energy Food Oatmeal pouch, two banana halves, a salt packet and water and gatorade at every stop. Besides being moderately hypothermic at the end of the race I was completely depleted of all energy stores. I have always struggled with a fast metabolism and long endurance races because my body struggles to keep up with fueling. During a road marathon it is tough for me to stay fueled because you can’t carry as much as you might during a trail marathon where I carry a pack and devour all of the foods at aid stations or in a triathlon where I can grab fuel in transition and especially on the bike.

I am proud to have been extremely successful with marathoning to this point and am going to train and run my heart out for the Boston Marathon this spring. However, I need to take a break from marathons and focus more on triathlon and shorter distances: half marathons and 10Ks. I do want to do some work with a nutritionist as I move forward. I am planning to reach out to Jamie Sheahan MS, RD, Director of Nutrition at The EDGE Nutrition in Vermont. Jamie spoke to us about sports nutrition for runners at the Rise. Run. Retreat this fall and I can also work with my coach Denise Goode at The Sustainable Athlete. I am hopeful that I can get some further guidance about how to better fuel myself during training as well as on race day. There is a part of me that is having a hard time of letting go of the dream of running more marathons but I know that this thinking is somewhat silly since there are so many other ways that I can challenge myself and set goals for myself.

Don’t worry . .  there is still plenty more running, triathlons, racing and healthy eating to come . . . There are plenty more fun adventures to be had!

Have you ever ended up in the medical tent during or after a race? What is your “relationship” with marathons. Do you love them? Hate them?