Written by organicrunnermom on March 6, 2018. Posted in depression, Health and Wellness 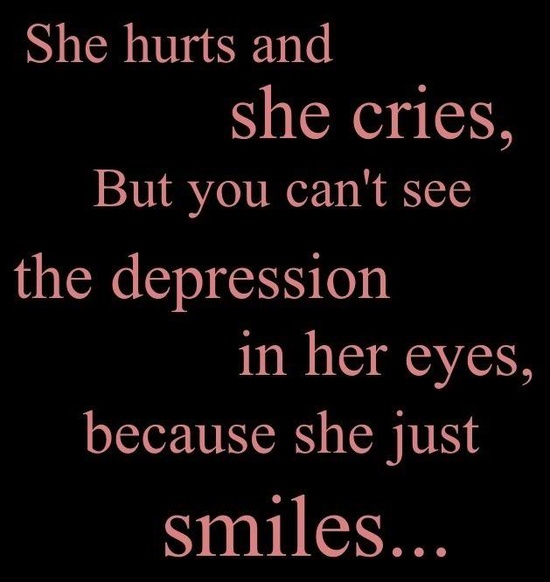 This really resonated with me . . .

I have debated whether to write about this or not but after much consideration I’ve decided to share some pieces of my story in hopes that maybe I might help someone else. If you follow my blog you know that in the past I have suffered from depression and post partum depression. I have also struggled with PTSD after the Boston Marathon in 2013. Well, this January everything spun out of control with my depression and I couldn’t manage it on my own anymore. I couldn’t fake being ok anymore. The hard part of depression is that it can get really bad without you realizing how far in you are.  I was spinning and spun into a dark hole that I could not get out of. Depression is a funny thing because it doesn’t care who you are and it can happen to anyone at anytime even when it seems like you have so much good in your life. For me the darkness of depression became too much to bear and I ended up in the hospital. Looking back on that time its funny because much of it is a fog and I cannot tell you how many days I spent in the hospital with all of the other people who were struggling just like me. All I know is that I needed to be there even though it was tremendously difficult to be away from my family.

While I was in the hospital I received therapy from two different Lisa’s. One was the nice Lisa and the other one was the tough Lisa who is basically there to give you a huge kick in the ass to help you get your shit together (pardon my French). This intensive therapy gave me many new tools to look at my life and how I approach everything. It was also decided while I was in the hospital that I was a good candidate for ECT or Electroconvulsive Therapy. ECT involves sending electrical current through the brain, deliberately triggering a seizure. This seizure can provide quick relief to severely depressed individuals and works well when medications are not. Over the past several months I have had 11-12 ECT treatments. I can’t tell you the exact number because ECT does cause retrograde amnesia causing you to forget some life events. I have definitely struggled somewhat with this symptom but this will hopefully improve as time goes on. This treatment was done in the hospital under anesthesia. Now that I am finished these treatments I may need to go back at some point for treatments as maintenance but for now I am finished which I am happy about because the treatments aren’t much fun and it takes about a day to recover from the ECT and the effects of the anesthesia which include headaches, jaw pain and general confusion.

Another piece of my treatment has been working on finding a new medication to treat my depression.  I have tried many different things over the years and had come to a point where nothing was really working.  I have tried Prozac, Zoloft, and Celexa to name a few. I was at a point where I was stuck in a low that I just could not get out of. Every day was hard. I was so tired all the time and jus wanted to be in bed sleeping. That was no way to live. So I began working with a new doctor who decided to try something new-Trintellix. So new that there is no generic which doesn’t make the health insurance companies happy but oh well. Thankfully this new medication is a win. With the combination of the ECT’s and the new meds I am feeling better than I have in so many years. I am sleeping well, waking up early, and ready to start my day. My outlook is sunny. While I still have some lows (don’t we all) I am feeling optimistic about my days going forward.

During these tumultuous months I took a break from the blog. There was just too much happening and writing and sharing about running and fitness just didn’t really appeal to me but now I am back and hope to start sharing some new fun stories, reviews and more with you. And, maybe my story has helped you or someone that you know.

I hope you will share what I had to tell you today. It has taken me some courage to put these words down on the page.