Let’s talk about triathlon – the swim (A three part series)

Written by organicrunnermom on September 17, 2014. Posted in Cross-Training, Triathlon 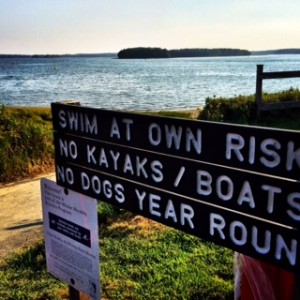 Swim at your own risk at the Lobsterman Triathlon

Let’s pause on the Reach the Beach talk for a minute and rewind to my first triathlon which now seems like ages ago.  I barely had time to breathe after the Lobsterman Triathlon before I jumped into a van and raced down the roads of New Hampshire at Reach the Beach last weekend. I have a lot of time to reflect on my triathlon experience and want to share some more with you. Let’s take a look at the first part of the raceThe Swim

I actually felt very relaxed as I “wetsuited” up for the swim leg of the triathlon. I waited to pull my wetsuit up until the last possible moment because the temperature was a hot 86 degrees and humid. I knew that if I suited up too soon I would be sweltering. A quick wetsuit tip: make sure you pull the legs of the suit up high enough to prevent the suit from feeling like it might strangle you as you swim. Also, remember to apply body glide to your armpits (for sleeveless) and to the back of your nexk as these areas WILL chafe during the swim (after the race I thought I had really bad sunburn!).

I joined the other wetsuit clad swimmers in the starting area to listen to last minute safety and race instructions.  This is when my belly began doing flip flops although I was glad to have participated in the swimming clinic the day before so I had at least had a small taste of what swimming in a group and in the ocean would feel like. When my age group was called to the water I put on my pink swimming cap and goggles and headed into the water with all of the other women. It would be an in water start so we had a minute or two to adjust to the water temperature. The water wasn’t too cold but I was happy to have the wetsuit for the extra warmth and buoyancy.  If you think you have the swimming portion of the tri down think again . . . swimming in a pool or glassy river or lake by yourself DOES NOT mimic swimming in the bay with other people! Casco Bay was gorgeous but the water was choppy. 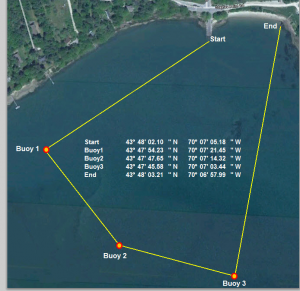 The swim course at the Lobsterman Triathlon

The timer counted down the start and we were off! .93 mile (1.5K) swim! Here we go! I was bumped and jostled. At first I was swimming in between two other swimmers. We all swam at the same pace which meant I was being squished like a sandwich with every stroke. They were the bread and I was the cheese. I thought to myself “I had better get out of here!” so in an act of self-preservation I let them swim ahead. After I had some more space I commenced my freestyle strokes only to be continuously smacked in the face by seawater which I of course swallowed in large gulps. I started to feel my adrenaline rushing and the swim became less about speed and more about just swimming on to the finish . . . survival if you will. My form went out of the window and the beautiful bilateral breathing I had been doing during the swim went right out the window in favor of breathing every stroke and attempting to stay on a somewhat straight course as I rounded the buoys. Thankfully as I passed the first buoy I began to relax a bit (ha!), well at least my breathing got somewhat under control and I was able to get into a good rhythm.

It was so difficult to tell how I was doing during the swim but (at least for the first triathlon) I was not too concerned about my speed (there will be time to work on this all winter). There were caps of all colors around me. As I swam I definitely had more bumps with other swimmers and even felt swimmers coming over the back of my legs (definitely not desirable).  I supposed you get used to all of the jostling the more you compete in tri. 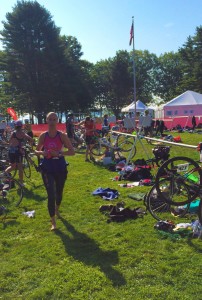 Now I have to get on a bike?

Overall I would say my reaction to the swim was shell-shocked . . . the picture says it all! I was happy to have made it through the swim portion of the race and I know that there is huge room for improvement. I was definitely happy when my feet finally hit the sand and I was able to slowly jog into the transition area to get ready for the bike leg of the Lobsterman Triathlon.

Please stay tuned for the next installment of Organic Runner Mom takes on the Lobsterman Triathlon! Please share your triathlon experiences and mishaps with me!