Surfing in Costa Rica. Lessons from the Surfboard.

Written by organicrunnermom on January 30, 2019. Posted in Inspiration, motivation, swimming

Surfing in Costa Rica. Lessons from the Surfboard. 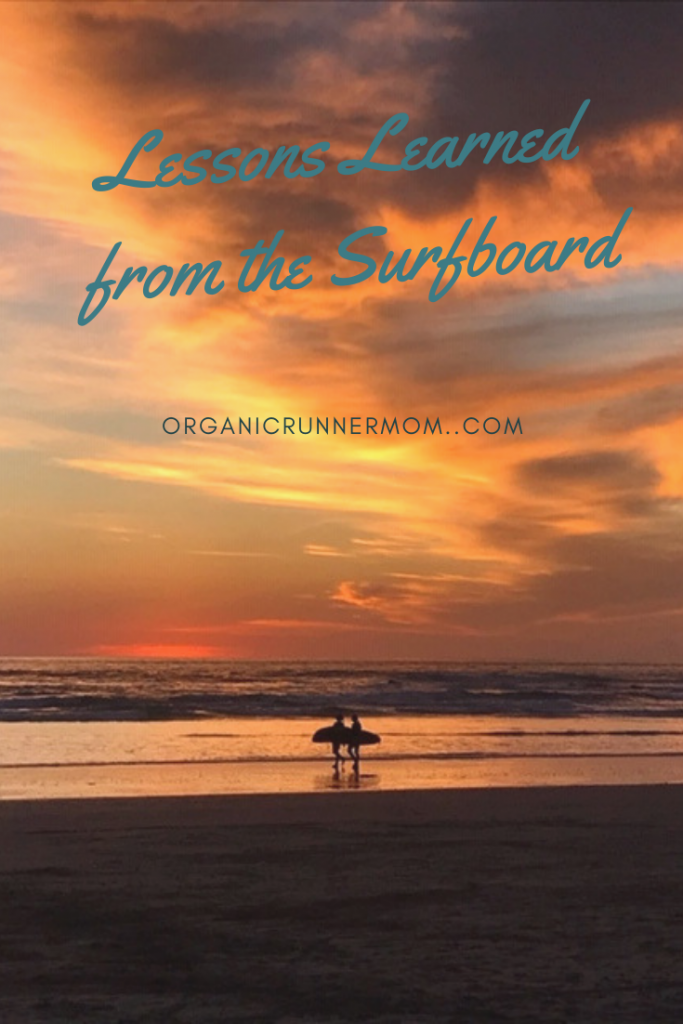 It’s hard to believe I was recently in Costa Rica now that I am back in cold and snowy New Hampshire. Even though the warm weather and the waves are a memory, I came back from Costa Rica carrying lessons from the surfboard with me to share with you. 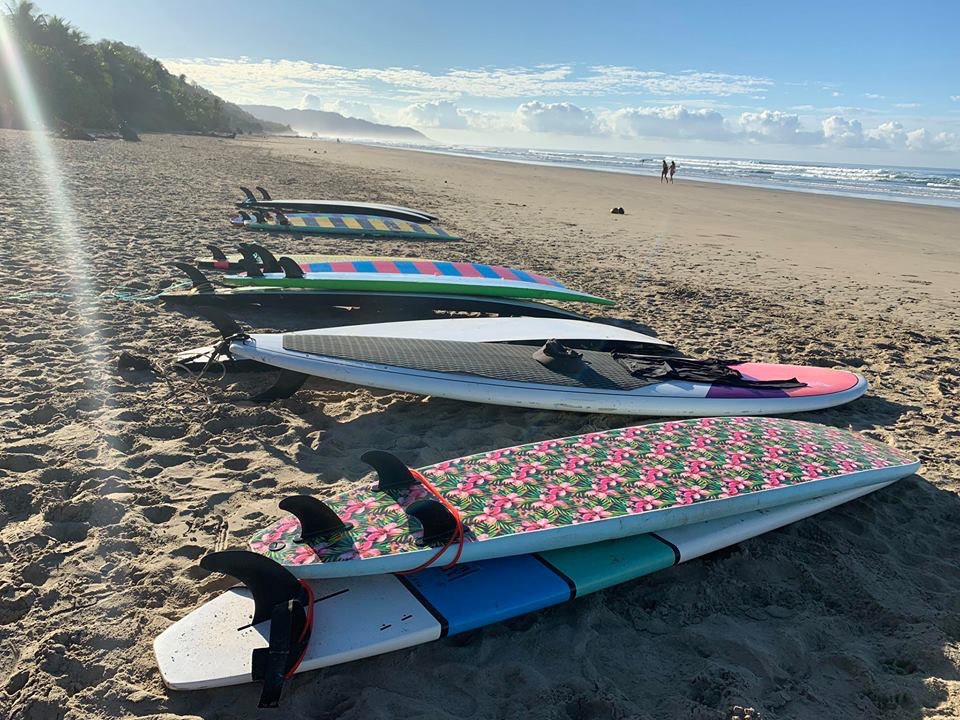 Surfing had always been something that I had dreamed about doing but I never knew that I would actually be able to do it. Last year was my first chance when I traveled to Santa Teresa, Costa Rica with Women’s Quest and this year I got to go back and do it again (Lucky me!!!!). Last year was my intro to surfing. Much time was spent surfing in “the fluff” or the small waves that break closest to the shore. On the last day I was able to go with Nicole (Owner/Founder of Skirt Sports) to “the green waves” at the “Grommets” Beach (basically where all the little kids go and surf-ha!). Those waves seemed big to us! It was a blast. Little did I know this year I would get the chance to surf “the line-up,” the waves that are the furthest out from the shore. The biggest waves that we would encounter on the trip. 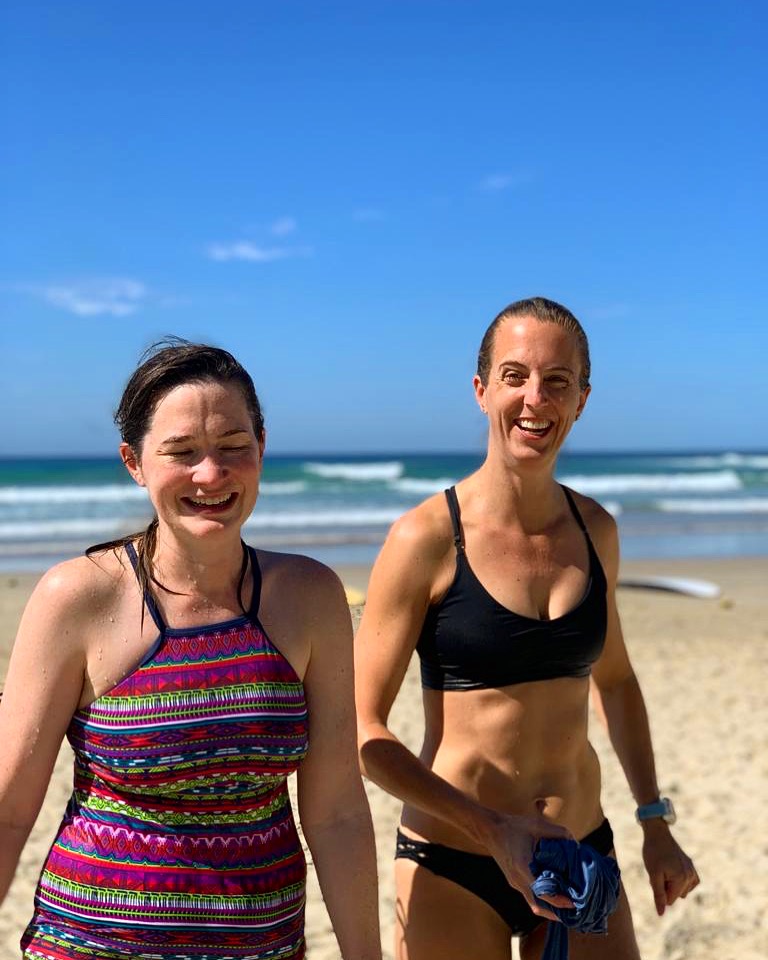 This year I got partnered with my friend Fawn (who our Italian/Costa Rican Instructor would call Fannie). We were surf partners last year too which was awesome. The first day we got to go out in “the fluff” and just kind of play around and get reacquainted with the surfboard. Apparently it is somewhat learning to ride a bike and after just a short time my body remembered the feeling of “popping up” on the board. I definitely spent my fair share of time falling off the board and cleansing my sinuses in the ocean (ha!). 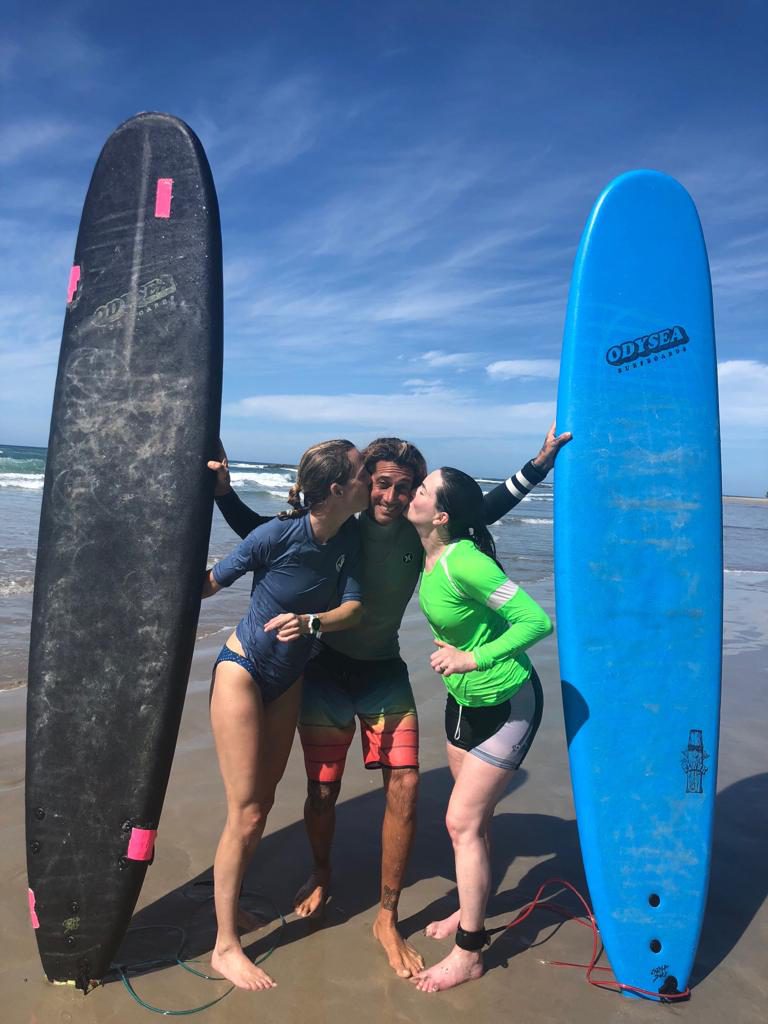 Ciccio and the surfer girls.

On the second day we surfed in the fluff again this time partnered up and working with our instructor Ciccio (Chee-cho) who gave us pointers about the pop up, foot body positioning, and also on how to start steering the board. Colleen, the head of Women’s Quest was really pushing for Fawn and I to move out to the bigger waves but Ciccio didn’t want to rush it. He wanted to make sure that we had good awareness of the waves, the ocean, the surfboard and proper technique in getting up on the board. He also felt the importance of developing our trust as well as trusting that we were listening to him.

On the third day Ciccio took us to surf in “the green waves” in the channel which are the next largest sets of waves. For this part of instruction he got into the surf with us to help us find the best waves to try and ride. These waves were bigger but manageable and paddling back out wasn’t too challenging because the channel would help carry you out. 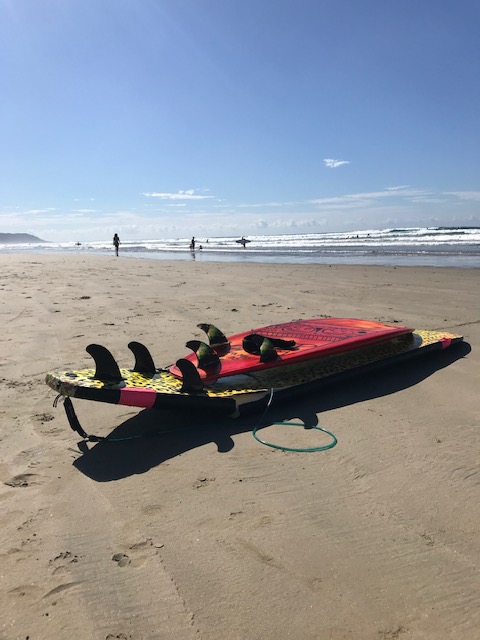 My board is the broken one, haha!

On the fourth day we got the news, Fawn and I would be heading out to “the line-up” to try surfing the biggest waves. Ciccio thought the surf looked good, the waves weren’t too big and the sets weren’t too close together. We spent about 25 minutes of instruction on the beach talking about how to paddle out to the resting zone past the waves as well as what to do to get over/through the waves on the way out and also on the way back out after hopefully catching a wave. We reviewed how to get up on the board and proper positioning. Ciccio told us about respecting the ocean and the waves, never turning your back on the waves. After that we were ready to head out. I was nervous but excited and Fawn was ready to go! We headed out through the channel. Paddling out was exhausting and you had to navigate  going over or through waves. The 4 options for navigating the waves were: timing, chest up (and over the wave), turtle roll (hold on to the rails of the board and roll with it through the wave), and dive through the wave leaving your board trailing behind you (the board is attached to your ankle by a leash). 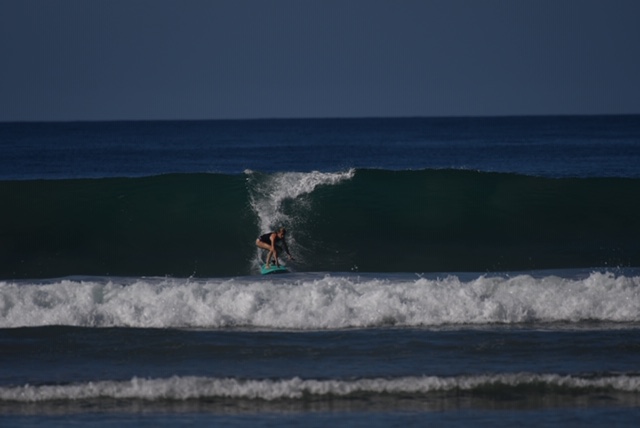 After paddling hard and navigating the waves we finally made it out to the resting zone with the other surfers. It was beautiful. We could see the houses up on the hillside and the whole beach. The water was crystal blue and you could see through to the bottom. Ciccio was up ahead of us closer to the waves ready for us to come and wait with him for the best waves to try surfing. When it was my turn I waited with Ciccio until he said, “ok go, paddle paddle, paddle . . . Pop Up.” as he guided my board from behind into the wave. It was a rush. Exhilarating, scary, amazing! I caught the first wave and rode it for awhile before being tumbled off into the surf which was jarring. You have to cover your head so as not to get hit by your board and just let the ocean cartwheel you until you finally come up for air. after falling I had to make my way back out through the waves which was not easy. The waves were coming in fast and they were big. I finally made my way back out, and shaking, I was finally able to collect myself and catch my breath once I was in the resting zone. Then it was Fawn’s turn. We continued like this catching waves and not catching waves for awhile until a huge set came through and Ciccio and I had to dive through the waves. After I dove through the second wave I came up and my board was in two pieces. What?!!! Ciccio and Ish (another instructor who was out with Nicole) directed me over to them and Ciccio gave me his tiny, fancy surfboard and instructed me to use it to get back into shore. Amazingly I was able to use his board to boogie board back in and caught an amazing ride almost all the way back to the beach.

Check out @organicrunmom’s lessons learned from the surfboard in Costa Rica. #costarica

For the next two days we spent about half of the time surfing the line-up and half of the time surfing in the fluff. Surfing the line up is such an incredible experience and so exhausting. By the sixth day I had become much more confident on my board and caught each wave I tried for. Such a rush!!! It was so great to be out there with Fawn because we cheered each other on and watched out for each other. There is a lot of trusting the people that you are with that comes along with surfing. We always checked in with each other to make sure that we were able to continue surfing the big waves and we trusted Ciccio to help keep us safe in the water. At one point I was diving through a wave and the surfboard hit me on the ribcage and knocked the wind out of me. I told Fawn I would need to go into shore and continue our surfing in the fluff for the rest of the day. She was fine with that because as partners we needed to respect each other and to help keep each other safe.

Lessons Learned from the Surfboard: 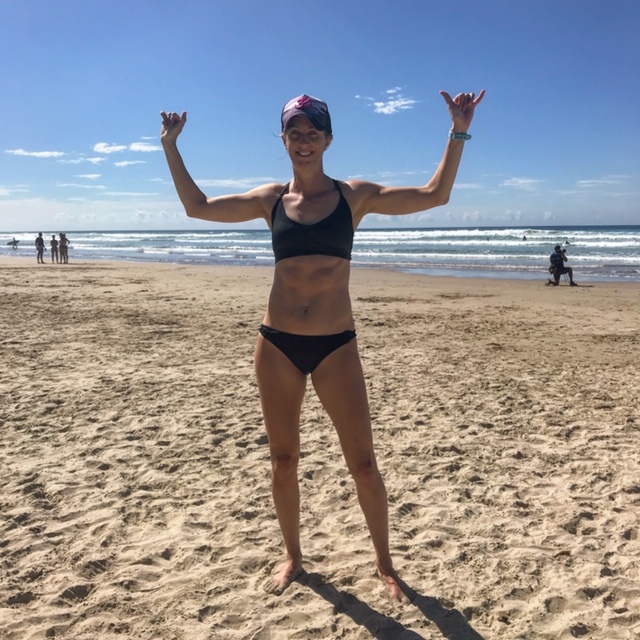 These are just some of the lessons that I learned from surfing in Costa Rica. I am sure as I reflect back on my trip more there will be other important lessons to take away from the experience.

What lessons have you learned from doing something hard or something new? 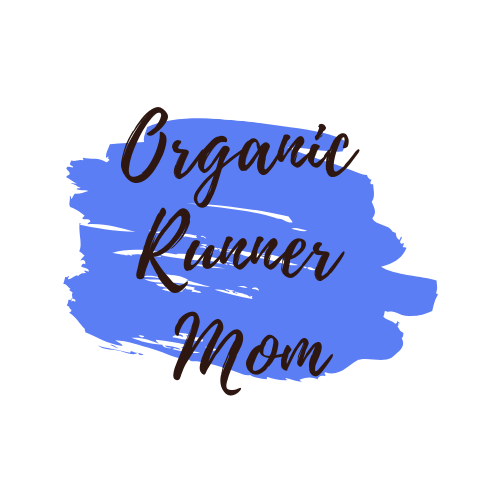