Learning to love my bike. Triathlete in the making.

Written by organicrunnermom on July 27, 2015. Posted in Inspiration, motivation, Triathlon 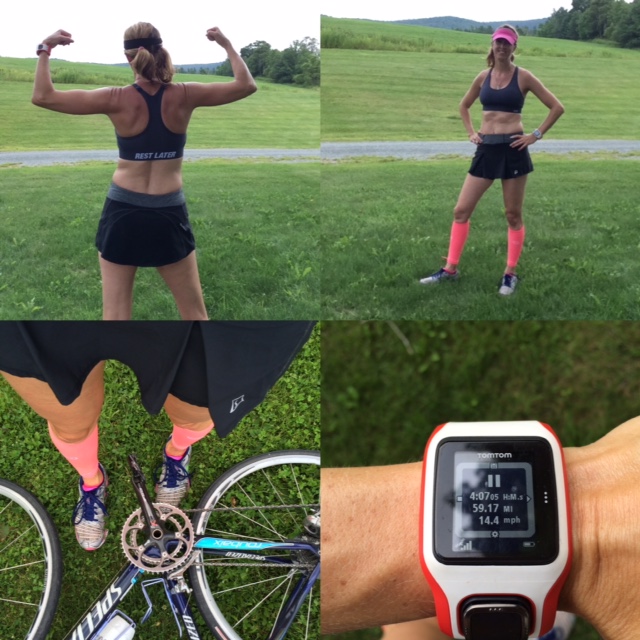 Finding my love for the bike! 60 mile “Brick” complete!

Finding the love for my bike.

I will be racing my first Half Ironman in about 3 weeks. Wow! How did time pass so quickly. My training hasn’t been everything that I have wanted this summer but that’s ok. Organic Runner Dad has been traveling a ton, my kiddos are home with me for much of the summer and we’ve been busy out living life and adventuring.  My biggest goal for my first 70.3 is to finish the race . . . hopefully with a smile. The great thing about racing a distance that you have never done before is that there are not expectations. During my training my focus has simply been on becoming a better swimmer and a stronger, faster bike rider. Thankfully I think I have the running part down!

So let’s talk about the bike ride portion of the Half Ironman. While I feel that I have always been a decent cyclist my love for the bike has not always been there. I began riding my road bike before we had kids with some friends but always found stressed that I wouldn’t be able to keep up and was always worried about clipping in and out of my pedals at intersections, and fearful about big hill climbs and big downhills. Once I got pregnant with my daughter way back in 2007 (eek! She turns seven next week!) my bike began collecting dust in the corner. Unexpected abdominal surgery when I was 12 weeks pregnant put all exercise on hold except for walking for the duration of that pregnancy and once I had my daughter I found that running was a much more efficient way to get out and get exercise. Sadly my gorgeous carbon fiber Specialized Roubaix became a fixture in our barn collecting dust and fancy spider webs until last year when I decided to switch gears a bit and to try my first triathlon. I still feel like I am young like I was before I had my kids but sometimes my body disagrees.A fter dealing with tendonitis in my foot  after Boston 2013 it began to become clear that I might need to change the way that I was training. Triathlon was the perfect answer. Swimming and biking gave me the endorphins that I love and new strength without all of the high impact from running all the time. And so my journey back on the bike began.

Do you love to ride a bike? How did you discover the love for your bike? #triathlon

Last summer I feel like I was still dabbling in the world of bike riding but this year I fully committed myself to more time on the bike when I hit the entry button for the Timberman Half Ironman.  There was no turning back. I was determined to find the love for bike riding that I have always had with running. Riding a bike is harder than it looks and becoming a proficient cyclist takes countless hours of riding, slogging through the miles, becoming comfortable with how your bike shifts,  and building up the stamina for riding in a strong cycling position. I began logging miles this winter when my back was still in a crazy state and thankfully this kept me sane with 5 months of no running.

It took forever for the winter to dissipate but once I got my bike on the road for the first time I felt liberated. During my winter of no running I had gained new upper body strength from lifting and cross country skiing which gave me more control over my bike. I felt more stable than I ever had riding on the road. Also, due to the crazy schedules of me and my cycling friends I have had to spend much of my time this summer riding on my own. At first I did not like this but riding by myself has allowed me to practice riding at my own cadence and also to push my pace when I want to and to work on the hills by myself. I As the summer months have worn on I have found myself slip into a new ease and comfort on my bike. Today I put my cycling skills to the test with a long “Brick” workout. I tried to find a buddy to ride with but with no one available Organic Runner Dad helped me map out a nearly 60 mile route I got on my gear, loaded up my fuel and hydration and went for it!

57 miles of running and 20 minutes of running later I feel strong and confident and ready to race in a few weeks.

Just like that I have finally “learned” how to truly ride my bike and to love it.

Do you love to bike? What is the longest distance you’ve ever ridden? Have you or would you ever do a triathlon?