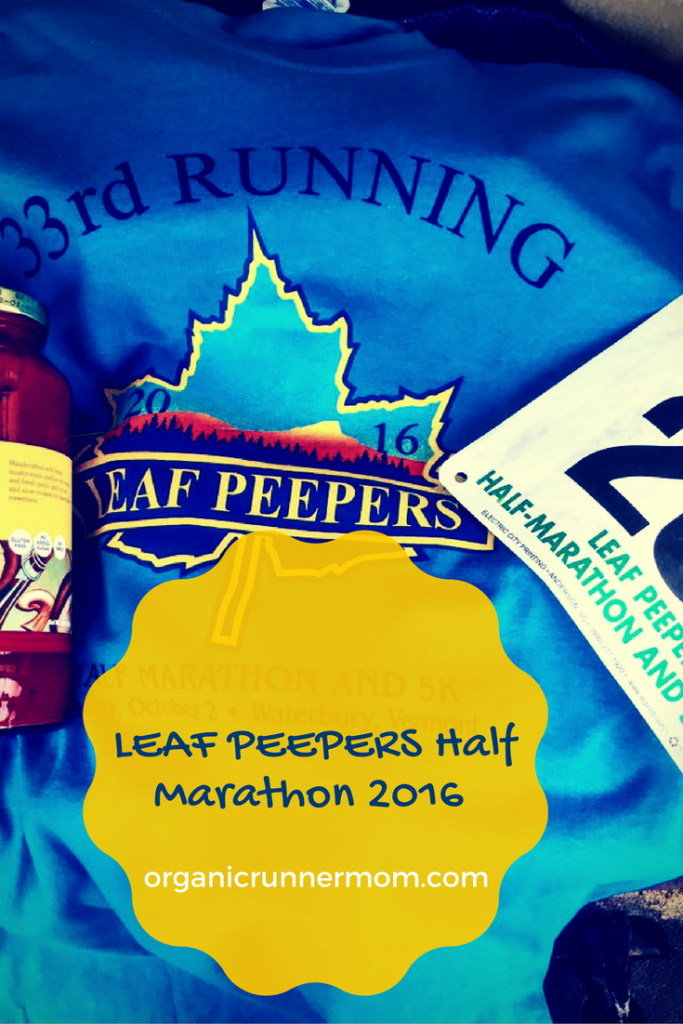 Leaf Peepers Half Marathon. The hills, the determination and all the running!

As we neared the cone to turn around past the halfway point of the Leaf Peepers Half Marathon (The race that was the culmination of Rise. Run. Retreat 2016 in Waterbury, VT) I was feeling thankful to have Laura lock step by my side. Our paces matching. Earlier she had encouraged me up the large hill that loomed up ahead early on in the race. I had gone out a little bit fast and wasn’t expecting a large hill so early in the race. It was my fault for not looking at the course description ahead of time although sometimes I would prefer not to know what the race course would hold. As the hill wore on I encouraged her to run up ahead. I figured I would not see Laura again on the course except for a flash of red from her tank in the distance. 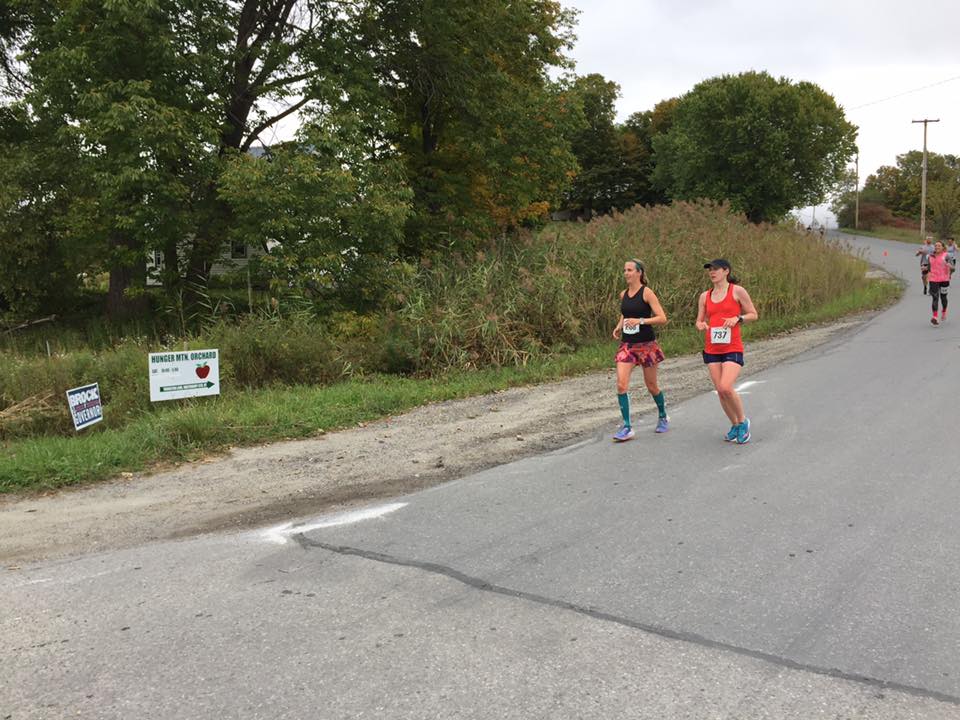 After slogging up the long hill another runner by my side, I declared, “we are king and queen of the hill,” even though we were not first to the top to claim the prizes offered by the race. Feeling breathless and my heart rate high I worked to get a strong pace back and then saw Laura and Sarah up ahead of me. I knew that with a little work I might be able to catch up to them. Sarah was running the race as a tempo run workout (she will be racing her goal race at the CHAD Hero Half at the end of October) so she would pull away from us soon when she got ready to pick up her pace. Laura is chasing down her Boston Qualifier coming up at the California International Marathon and was running strong and steady. Her pace felt relaxed and I could see that she had a lot more. I ran with her working to match her strides. I often like to run races by myself but found a nice rhythm in our step and appreciated chatting when the hills were not too hard to leave us breathless. We were nearly in sync as we passed Jesica who was waiting on the corner cheering us on and snapping photos. Jes was not running the full half. Due to have a baby in January she was our cheering squad and paparazzi and then would later finish the race running with Sue and Nat picking up some great miles. 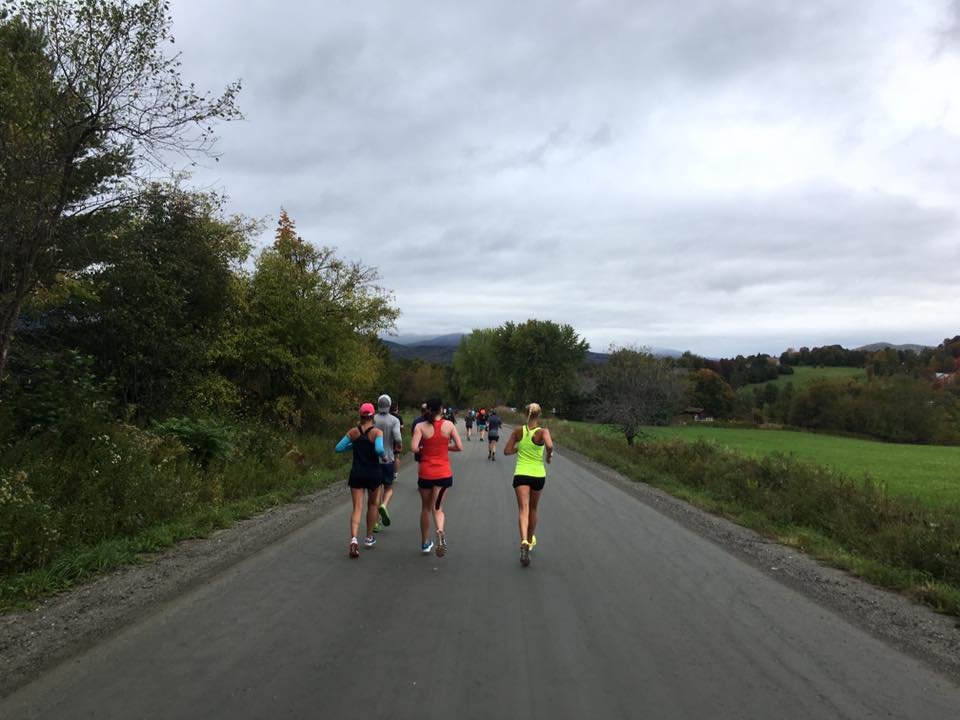 Trying to catch up to Sarah and Laura earlier in the race.

As we approached the cone where we would turn around  The miles had ticked by with such great running company and Laura was so at ease when running that it helped me to stay relaxed (I have lost that relaxed feeling when running and need to channel more of that). Allie, who is also a badass triathlete, had gone off at a quick pace so we hadn’t seen her on the course. Before we reached the turn around we finally saw Allie with her brightly patterned shorts, a look of determination and strength. She looked so strong and also was relaxed in her strides. Allie would later finish the course 3rd in her age group (AWESOME!) bringing home a giant block of delicious Cabot “Cheddah” (What could be “bettah” when running a race in Vermont!). We cheered her on as she sped by and I got a great jolt of inspiration! Not too far behind her was Sarah, a flash of yellow in her neon yellow Dr. Cool Top (Rise. Run. Retreat 2016 sponsor) and her signature braid. Looking like a gazelle, she flew by. 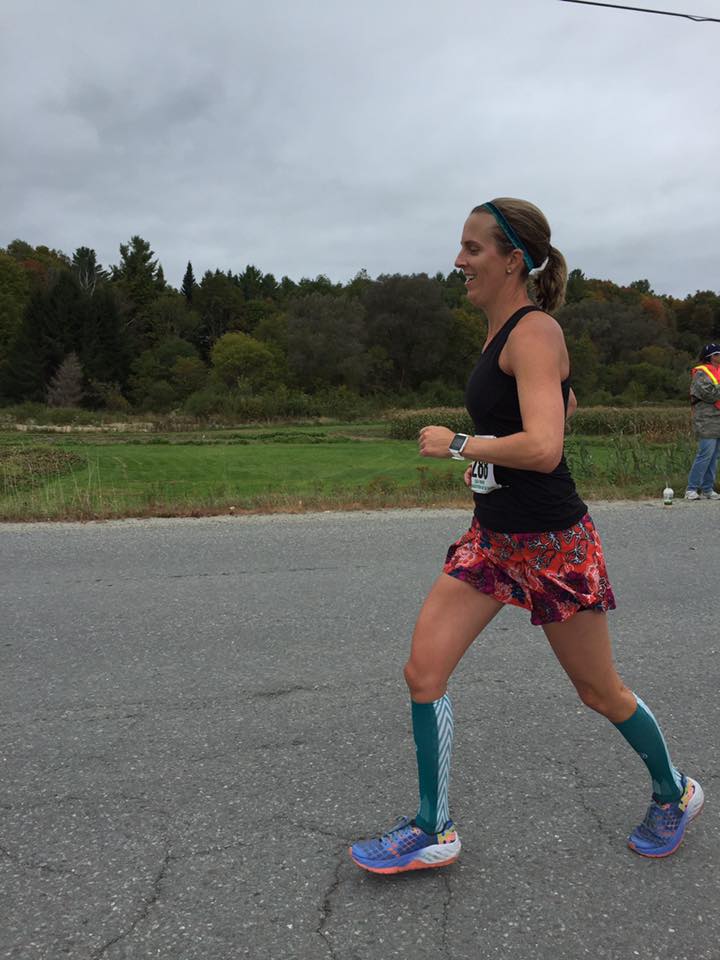 Trying to keep my strides long

Laura and I rounded the cone and ran a little further together and were thrilled to see Angela,who powered through the race despite cramping calves and coming back from major injury, then Christine who surprised herself with a strong run not having raced since having had two consecutive surgeries, and then Kara who still looked bright and happy despite the ridiculous hills (She is going to rock her half in Annapolis in a few weeks). Finally we saw Nat and Sue, all smiles who were run/walking the whole half marathon. Nat is recovering from a terrible bout of plantar fasciitis but is hopefully back on the road to recovery so she can crush the Boston Marathon in the spring. Sue being an incredible friend joined Nat so she wouldn’t have to run walk alone. I must say I was a bit envious of all of that uninterrupted catching up time. I am guessing that they might have had the most fun on the course! After we passed these strong inspiring women who had joined us for the amazing Rise. Run. Retreat. weekend it was time to dig deep and keep the last miles strong. 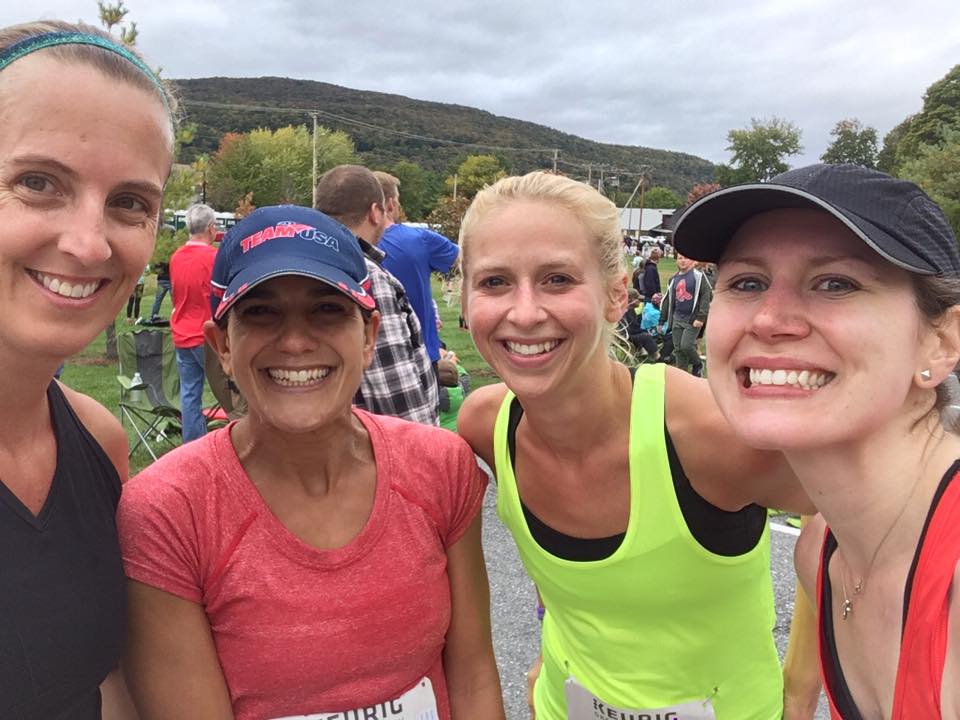 So happy to hear these women cheering at the finish line!

With a few miles to go I felt my legs getting heavier and I encouraged Laura to run on ahead. Her gait was still long and her legs looked light. The last few miles just like any race are the ones where you can give up or dig deep and push to the end. I was thankful that most of the hills were out of the way so I focused on keeping a good leg turnover, using my core and my arms, checked in with my running posture and just ran. Towards the end of the race there was some time on a gentle trail, my legs felt relieved as they hit the softer ground after all of the pounding on asphalt. Despite my legs being tired I was able to pick it up the last mile and hit a 7:41 min/mile pace which I am psyched about. I am racing the NYC Marathon in about a month with TEAM CLARKE (Check out my fundraising CROWDRISE for The Clarke Schools for Hearing and Listening) and hope to run a smart race that includes negative splits at the end! Finally I arrived at the end of the street where we had turned around during our warm-up run and new that the finish line was closing in. I always aim for a good kick at the end and pushed the pace hard through the finish line ecstatic to see Allie, Sarah and Laura there cheering me through. 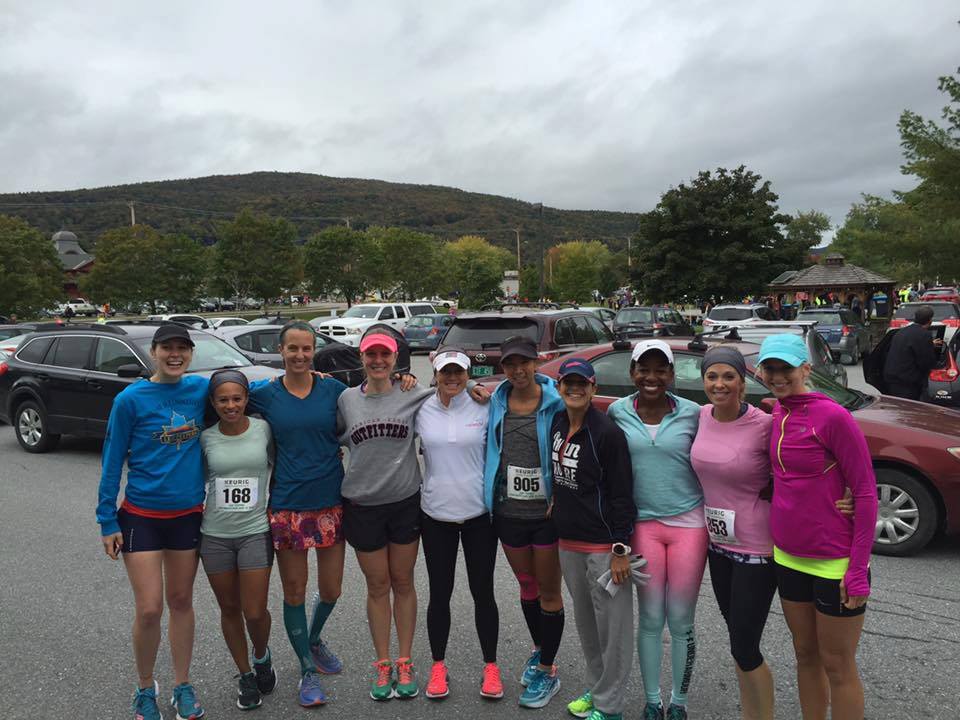 I am very happy about my finish time at the half as I complete my final miles leading up to the NYC Marathon but was even happier about the inspiring run I had with these other strong women. Damn these women are fast and motivated! Their passion for running and life filled me up during this weekend! 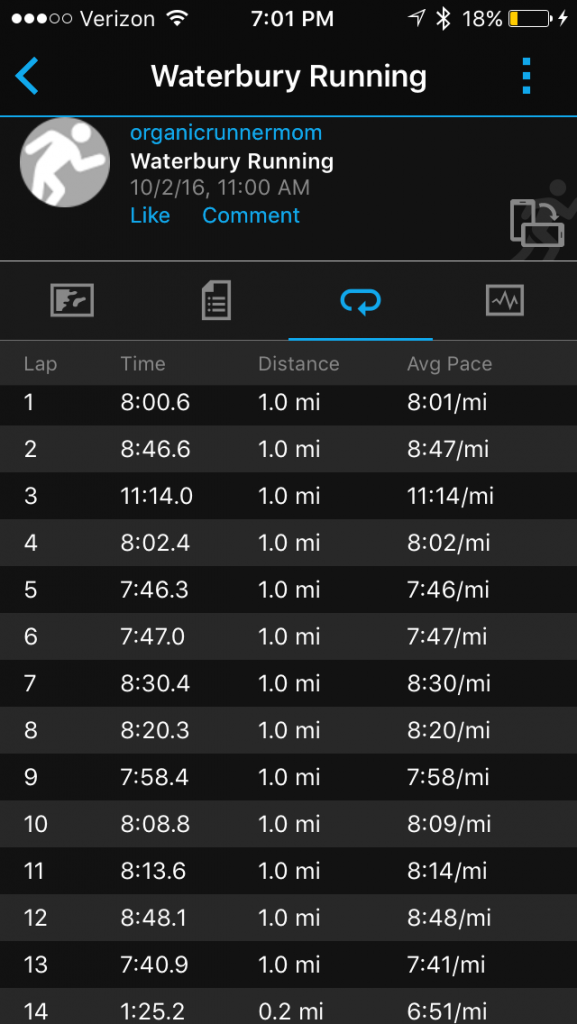 My splits from the Leaf Peepers Half Marathon. You can see where the hills are!

Finishing the race and celebrating with the kind, inspired women from the running retreat was sadly short-lived as we all needed to head back to our homes, our pets and our families. We wish we could have extended the weekend further but sadly we will have to wait for another time and settle now for facetime, e-mails texts and finding out what each one of us is doing by  following each others blogs.

Don’t worry though, there is still more Rise. Run. Retreat. 2016 recap fun to come as I still need to dish on what we ate, what we laughed about and the great inspiration that was to be had during the weekend. Please stay tuned for more and also be sure to check out the other blogs linked here within this post to get you motivated!

What is the longest hill you have ever run up? Do you love or despise running up hills?