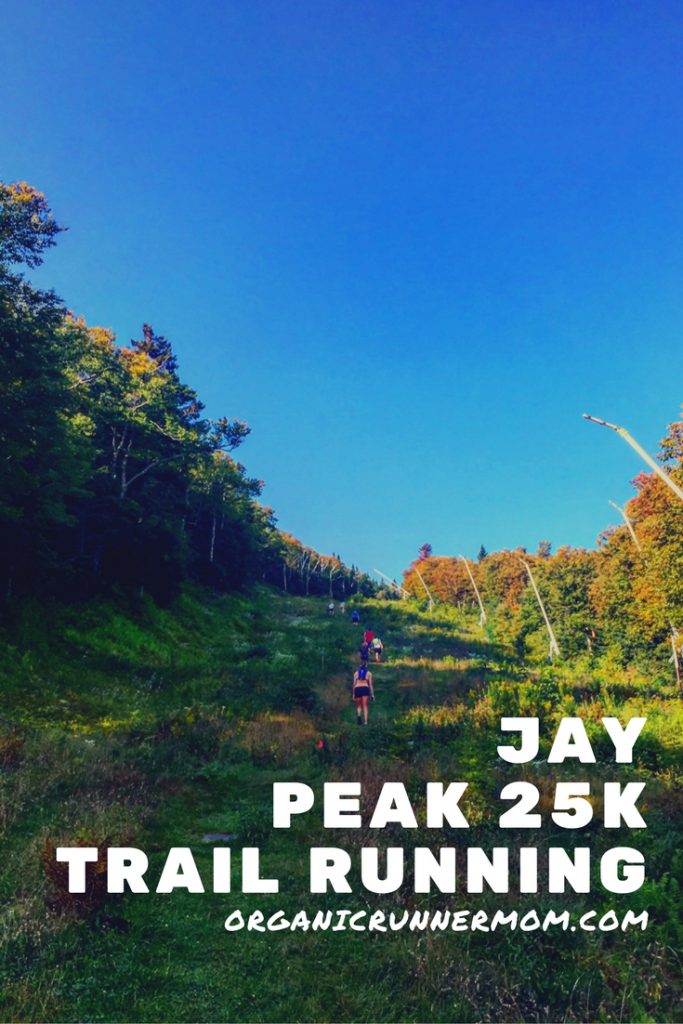 If you want a really challenging race to run next fall I would highly recommend the Jay Peak 25K at Jay Peak Mountain Resort in Jay, Vermont. I decided to run this race on a whim because apparently I am insane?!? I had run this race before but I guess amnesia had struck.  When my friend Sarah from Run Far Girl mentioned that she was planning to run the race I immediately chimed in and said that I wanted to run too. Sounds like a great idea when you are only two weeks post Timberman Half Ironman right???? Wrong!!!! My body really needed more time to recover but my thoughts went like this . . . sure I love running on beautiful trails, and on mountains, and oh to be running in the woods, and I do have a 16 mile run on my New York City Marathon training plan so . . . BAD IDEA!

Let me tell you, never make the same mistake I did. I actually ran the Jay Peak 25K trail running festival before in 2013 so I should have known better than to just wing it on barely recovered legs. This course is not for the faint of heart. The terrain and mountain climbing/descending is unrelenting. Your quads may never forgive you! 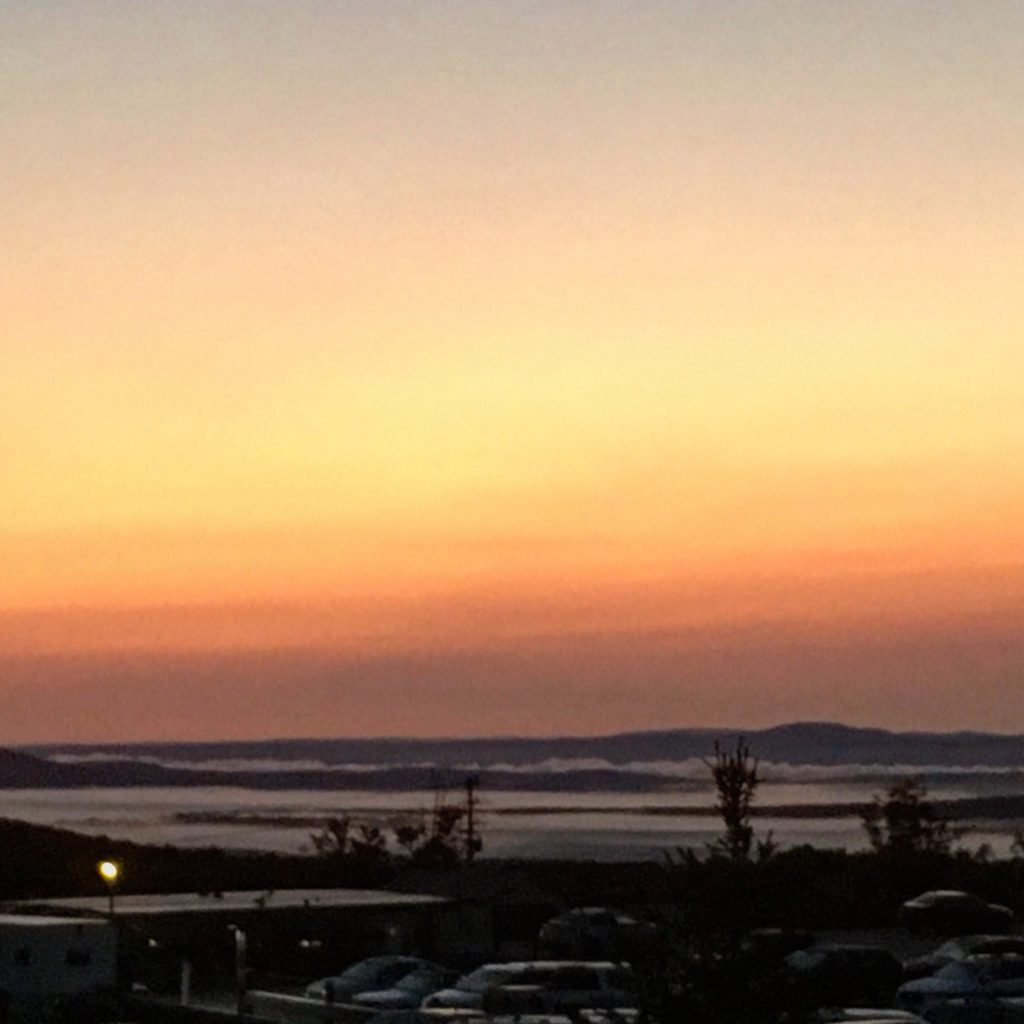 I woke up at the crack of dawn, well actually even before the sun had started to come up. It was 4 a.m. and it was dark, cold and foggy. I quietly got into my running gear and some cozy layers because there was a chill that morning, ate some breakfast, and hopped in the car for the 1 hour and 20 minute ride to Jay Peak. When I finally arrived at the mountain the sun was coming up revealing the valley below. It was a gorgeous and crisp morning. I went in and registered and text Sarah, who was smartly staying there with here family for running and splash n’ stay fun at the Jay Peak Pump House. We spent our pre-race time laughing, and stretching and pondering what the course would hold for us. I was surprised to even run into a former college rowing friend and his wife who would be running that day as well. 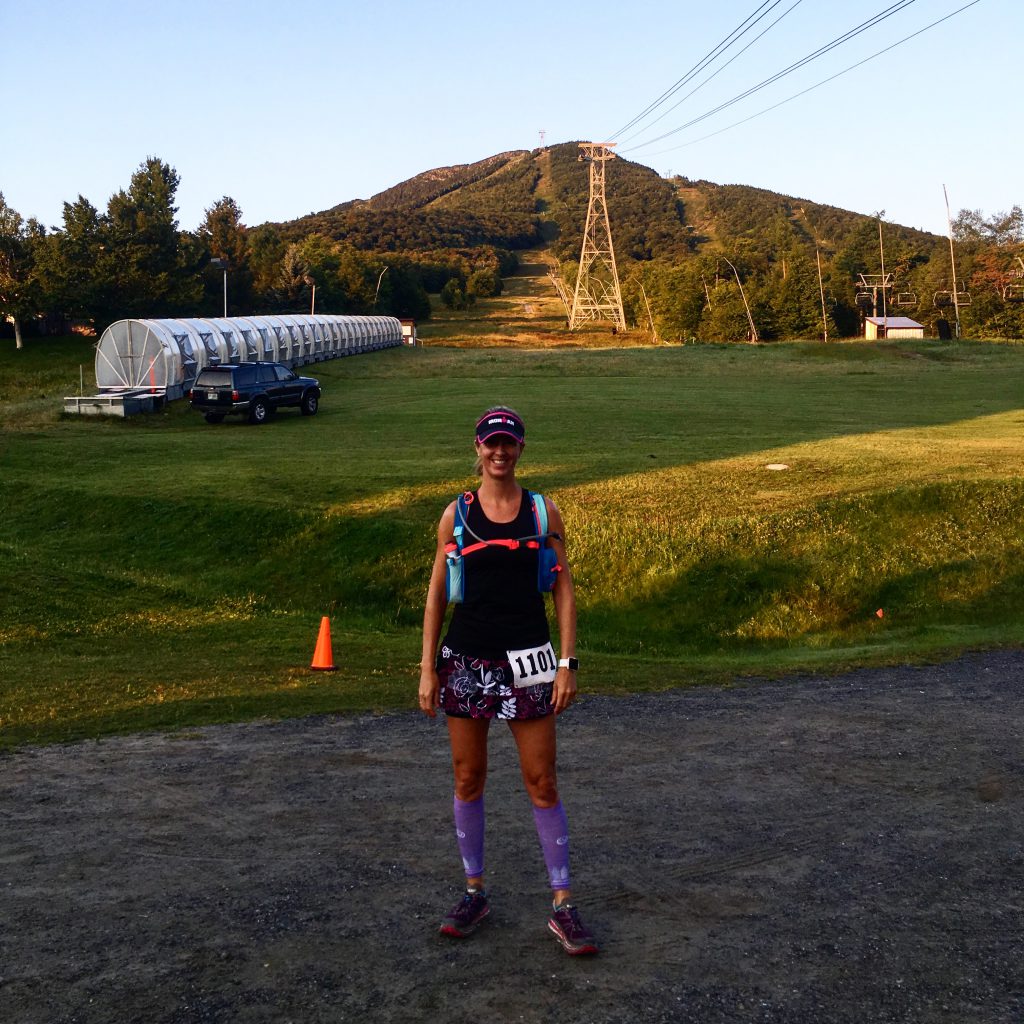 Ready to give this race a go!

My body felt well rested before heading out, not yet revealing to me the fatigue that still remained deep within my muscles from the Half Ironman. I love races like this because the start is low key and the atmosphere is relaxed a total departure from the feelings at the start if a race like the Boston Marathon which can be overly intense. Sarah and I were cracking up because the announcer for the race was this crazy dude with dreadlocks who kept saying things like, “Yah, mon, it’s time to race with your brothers and sisters. You are out here to do good for your bodies and what is healthy . . .” Once we were lined up with 200 other crazy runners we wished each other a good race and we were off. I was thankful that I would only be doing one loop of this course as some people would be tackling the 50K which was two loops of this insane terrain. 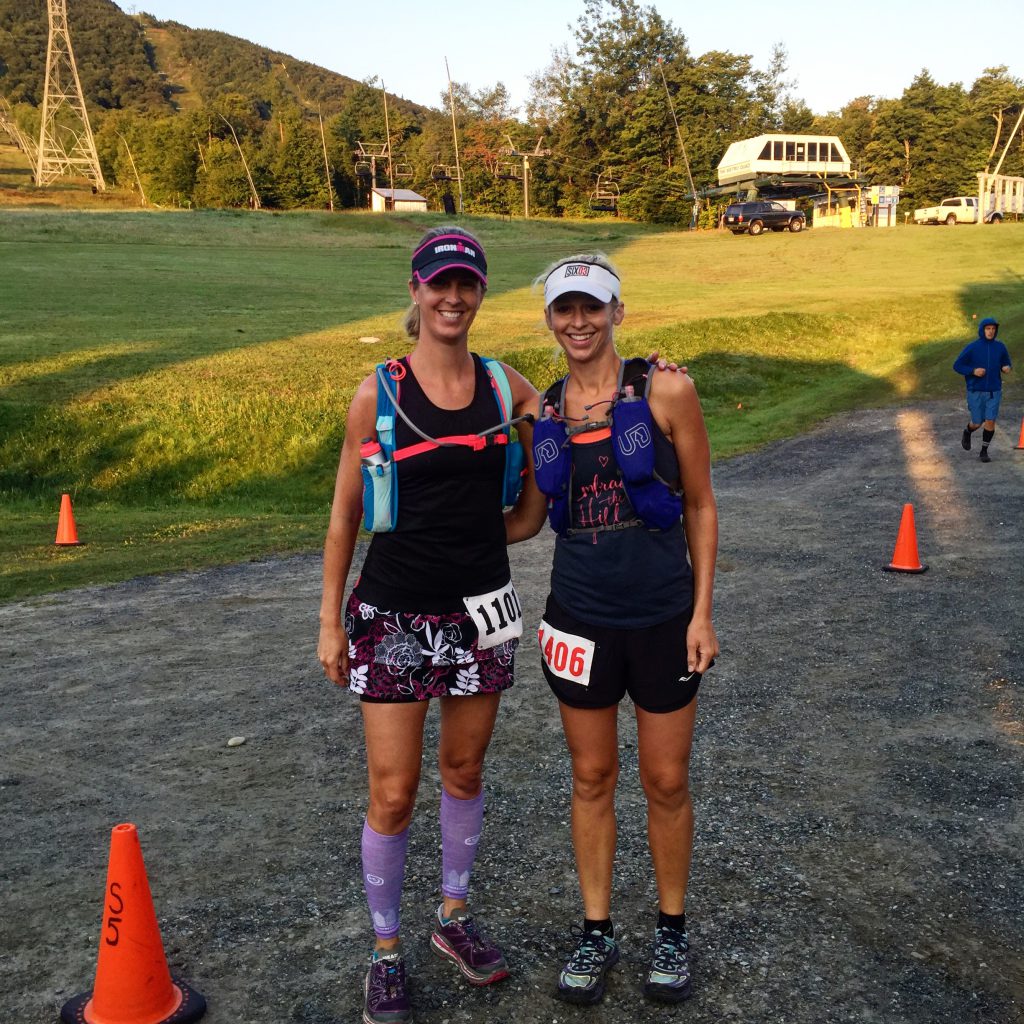 This is mountain and trail running so the terrain range from some single track trail meandering through the woods to steep ascents up the mountain followed by wicked gnarly descents that were just as steep, as well as a section on the Long Trail where you felt like you were going down into a hole only to have to run around a cone at and aid station to then “run” right back up it again. The footing in some places was very wet and muddy and due to being on a ski mountain there was a lot of navigating over water bars on the ski trails. As the race wore on my legs hated crashing into these water bars on the downhills, screaming every time my feet hit one. The terrain was so technical or steep at certain points of the race that it became more of a speed hike with the game being survival.  In some places you had to scramble up and over rocks relying on small trees to help hoist yourself up the steep trail. If you thought you were in for an easy race here you were duped. Even though this race was shorter than the North Face Endurance Challenge Trail Run in Utah it felt much hard even though it was lacking the altitude. I longed for the beautiful smooth switchbacks that were part of the North Face Race. This race is definitely a much different beast. 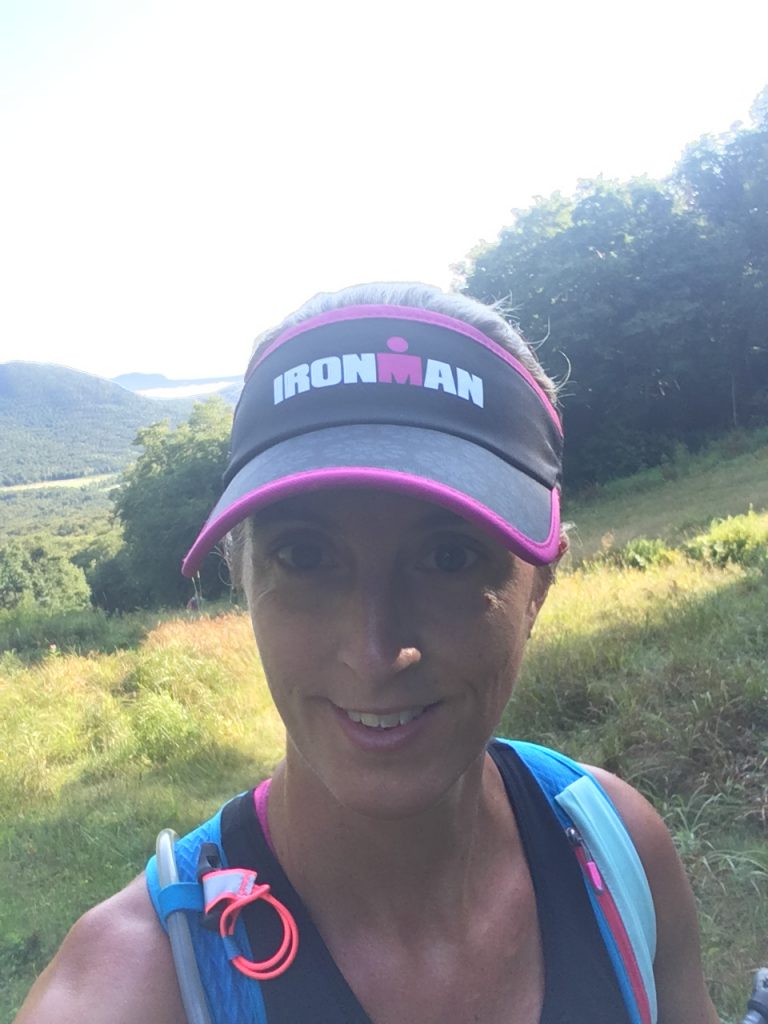 Trail Running to Survive. What am I doing out here?

During the race most of the other runners that I saw on the course were focused and quiet. Much of that was due to the lack of oxygen from the steep climbs (around 3000 feet of elevation gain during the race). Eeek! During the race I stayed close to several other women runners and we kept trading positions back and forth on the course. I felt strong (ish) going up but the downhills became increasingly more difficult to run as my quads screamed at me and my legs felt as though they might buckle. I was thankful to see Sarah cruising by me on the Long Trail section. She was having a great race and looked solid. We high fived and I cheered her on as she ran by (I must admit a bit jealous that she had already conquered the descent and ascent up and down this nasty section of trail). Sarah ended up crushing the race and finishing as the 3rd place woman!!! 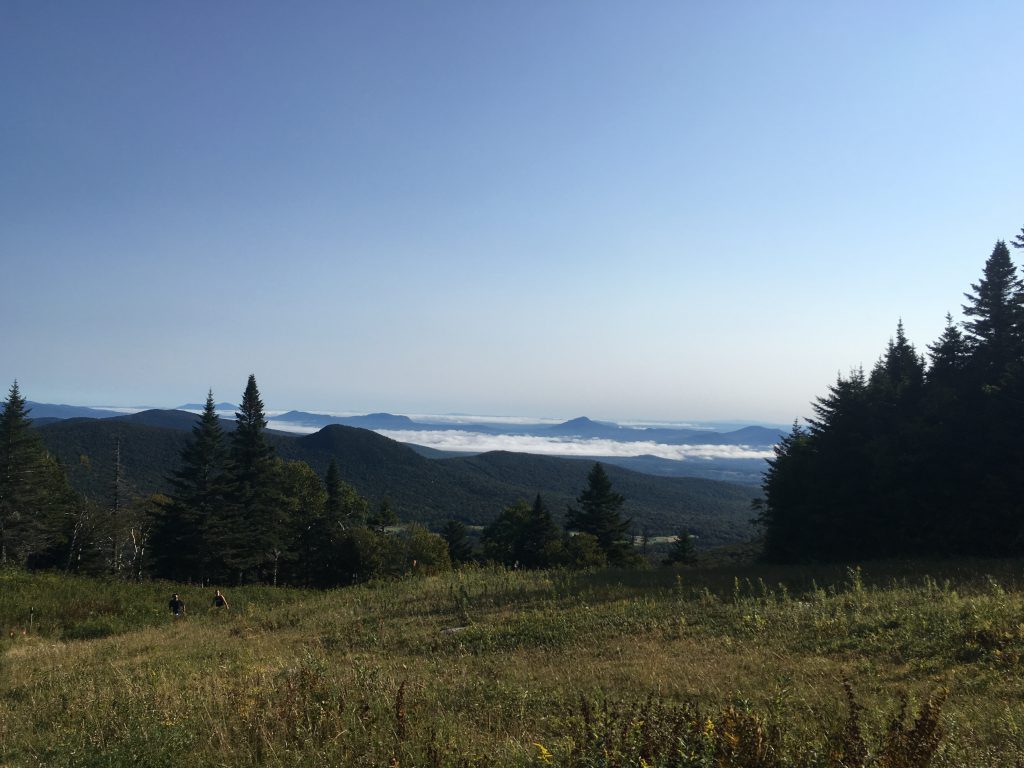 Finally I finished the Long Trail section and upon coming out of the woods was told by a race volunteer that there was only one uphill left. I felt relieved ran up for a bit, around a cone and began yet another downhill hopeful that the race would be ending soon. As we came down this section several women caught me (boo!) and we all had a moment of confusion not knowing which direction the course went. One woman stated that she knew which way to go as she had completed the 3 5K’s the day before so like a lemming I followed. Thankfully she was correct. Sadly though, the volunteer who had told us we were done with the uphills was incorrect and there was one more climb and descent on a trail so steep that it nearly did me in. By this point my legs were on fire and I started experiencing cramping in my legs in my shins. My legs felt as though they would buckle. They were jell-o. I allowed a few more male runners to pass me and descended in what felt like a snails pace. Eventually the terrain flattened out enough to recover and to make my way into the finish.

Need a challenge. Run the Jay Peak 25K in #vermont. Read to find out more! #trailrunning

At least we had the views!

4:24.16 after I started I finished the race! That’s a lot of time for only a 25K. Surprisingly though I was the 7th woman in the 30-39 age group to cross the line out of 17! Not to bad considering I was just wishing for this race to be done with about 6 grueling miles to go. As a finisher I received a glass (jar) with the Jay Peak Trail Running Festival Logo on it. Sadly they did not have medals for all finishers which was slightly disappointing after all of the hard work to get to the finish line and considering they had them the last time I raced. 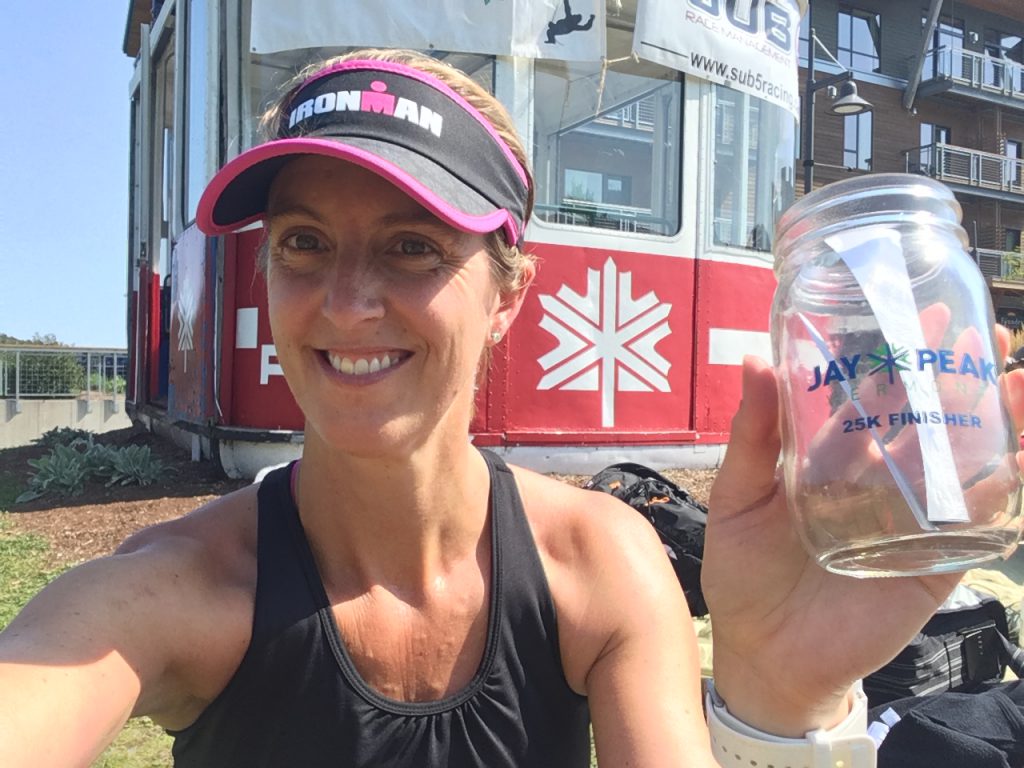 I am proud of myself for finishing this race and was so very happy to see Sarah and her cute kiddos at the finish line waiting for me to cross. My body felt beaten up and battered after I finished and I was left with blistered feet from all of the downhills and quads that were toast for days. I also felt this race in my back and was a little nervous that I had re-aggravated my old back injury that sidelined me for 5 months in 2014-2015. The week after the race I took it very slowly and didn’t run until the end of the week. 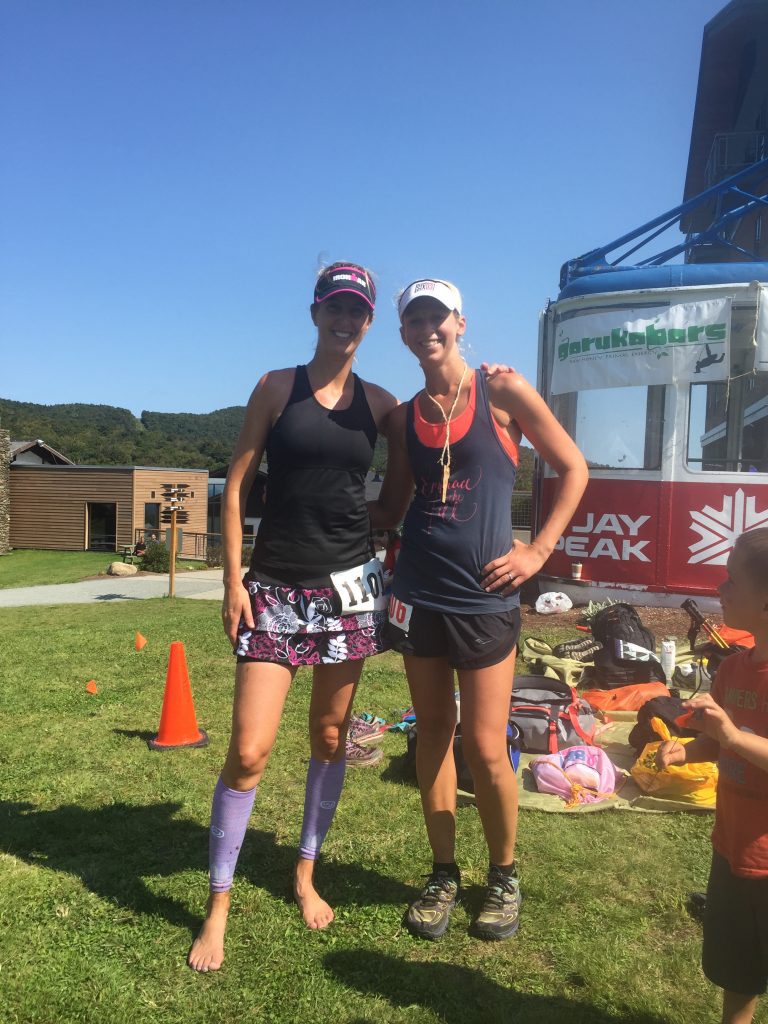 Thankfully I am back at it this week since the New York City Marathon is in less than two months and I’ve got a 20 miler on my training plan for the weekend! And in just a few more weeks I’ll be running the Leaf Peepers Half Marathon during the Rise. Run. Retreat weekend!

What is the hardest race you have ever run?