Written by organicrunnermom on October 30, 2014. Posted in Inspiration, Running 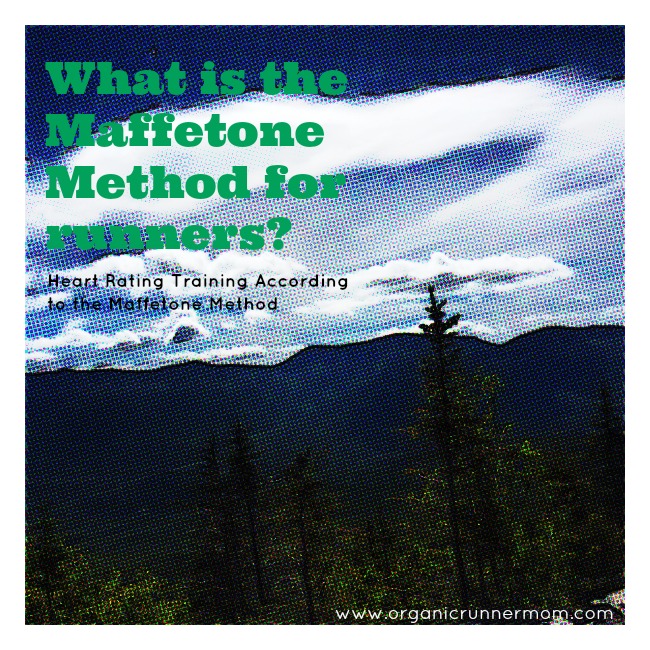 What is the Maffetone Method for Runners

If you are a running junkie like me then I am sure you heard about New Hampshire Native Larisa Dannis‘ incredible finish at the USATF 50 Mile Championship. She was the women’s winner with the fastest women’s finish time in 20 years. Her pace for 50 miles, 7:11 min/mile. What?!? Yikes! That is crazy fast! To give you an idea of how this compares to what I run, when I ran Boston in 2013 I ran 26.2 miles at and average 8:09 min/mile pace. I cannot even begin to imaging running almost 1 min/mile faster for 50 MILES! Larisa was also the fastest non elite Boston Marathon Runner at the 2014 race with a finish time of 2:44. The crazy thing about her amazing finish times is that she was able to complete her races maintaining an aerobic heartrate the entire time!

Since Larisa is from New Hampshire I have been hearing a buzz about her on the running circuit and how she has gone from recreational runner (and hiker, being a “peak bagger” going after the 4,00 footers and “the Grid”) to a USATF champion in 4 short years. I am intrigued to learn more about her approach to training which is called the Maffetone Method, a heart rate training method developed by Phil Maffetone author of “The Big Book of Endurance Racing and Training.” When I was a rower in college our coach, Mark Davis trained us using heart rate training methods. Every day for practice we would strap on our Polar Heart Rate Monitors to ensure that we stayed in the correct training zones. I wish that I had paid more attention to the philosophy and scientific reasoning behind this. Now my curiosity has been piqued and I am ready to learn more about the Maffetone Method.

Have your heard about the Maffetone Method for training? Learn a bit more about it with me! #runchat

What is the Maffetone Method–Larisa Dannis, “I became increasingly efficient aerobically” (UltraRunnerPodcast).

How does the Maffetone Method work?  The Maffetone Method, developed by Phil Maffetone works with his mathematical formaula, the 180 Formula. The 180 Formula is, “180 minus a person’s chronological age, which is then adjusted to reflect their physiological age as indicated by fitness and health factors” (SOURCE).  This method of training is not new by any means but according to Runner’s World is a more unconventional method of training these days. 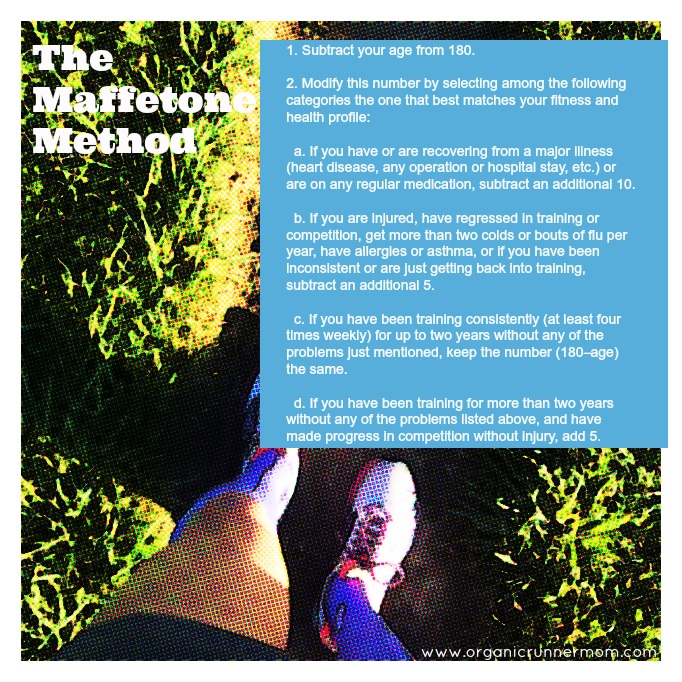 According to the Maffetone 180 Formula using my age and the fact that I struggle with ongoing allergies (seasonal, environmental) I would calculate 180-38-5=137 beats per minute. 137 beats per minute should be my maximum heart rate for training at an optimum aerobic level to increase my aerobic base within 10 bpm so my range would be from 127 bm-137 bpm.

According to Larisa Dannis’ interview on the Ultra Runner Podcast as she continued to train at her optimum heart rate zone she found that she while her heart rate remained consistent her paces began to quicken the longer she trained following this method.  Because Dannis relies on her heart rate to tell her how she is doing she does not focus as much on split times therefore not becoming a slave to the watch! I like the idea of this. Sometimes when you become too focused on pace per mile it can create a lot of stress during a race.  Dannis also shares that after two years of strictly training using the Maffetone Method she has added in more speedwork-hill repeats, fartleks, to address the body’s need of being able to work in an anaerobic zone as well.I am still learning about the Maffetone Method and am excited to follow Larisa Dannis’ running journey as she continues to race and tries to qualify for the 2016 Olympic Marathon Trials.

I am curious to talk to my coach Denise Goode of The Sustainable Athlete to see how this might fit into my own training plan. In 2012 when I first qualified for the Boston Marathon I was definitely in an upswing with my racing seeing many PR’s including my Boston qualifier. 2013 after Boston I had to work to regain my running shape after my bout of tendonitis and this year I finally feel like I have regained some speed.  Now that the majority of my racing is done for the year I am excited to refocus and set new goals for next year.  I am hoping to pick up some speed again come next spring and summer and know that I have some work ahead during the winter months.

Have you ever heard of the Maffetone Method? Do you use a specific training method? I’d love to hear all about it!