An unexpected recap of the 2014 Boston Marathon.

Written by organicrunnermom on January 1, 2015. Posted in motivation

Describe your running year in one word.

This post was inspired by Amanda from Run to the Finish who asks, “If you could describe your year of running in one word what would that be?”

Her question sparked an unexpected recap of my 2014 Boston Marathon, a recap which I have struggled to write.

In one word, my year of running was EMOTIONAL.

Here is a snapshot from part of my year. The Boston Marathon 2014 #BostonStrong 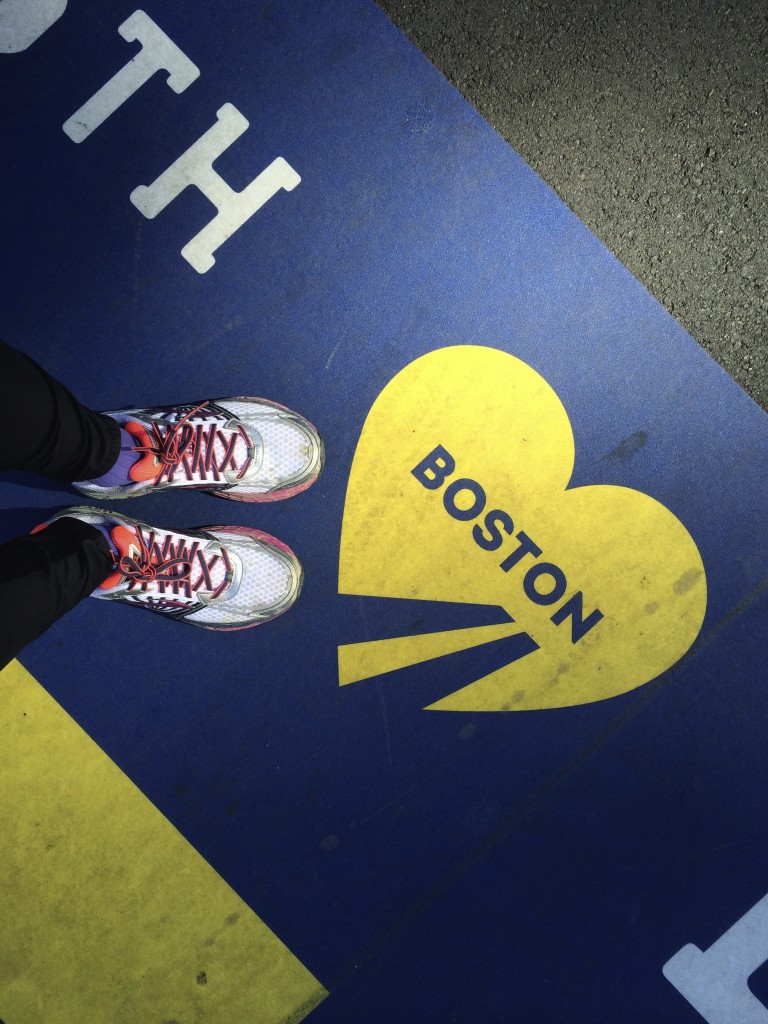 2014 was a year of putting myself back together both physically and mentally.  2014 began and Boston Marathon training was in full swing.  Training for Boston in 2014 was important. I had run in 2013 finishing the race a mere 10 minutes before tragedy would occur at the finish line.  My training for the Boston Marathon 2014 was full of highs and lows. I continued with weekly therapy sessions to work through PTSD that had plagued me since the 2013 race.  I wanted to be at the starting line in 2014 in order to heal, to run and to be able to finish. I needed to be there. The emotional journey has been hard and sadness about what occurred on the bluebird sky day in Boston still sneaks up on me sometimes when I least expect it.

Along with emotional healing at the start of 2014 I knew I would have to work hard to get my body physically strong for the Boston Marathon.  The miles during this training cycle never came easy as they had the year before. I still had nagging tendonitis in my foot and the polar vortex had a strong grip on New England ensuring that every long run would put ice on your breath and cold in your bones. Thankfully I got in my miles with strong running friends as my partners who were somehow convinced to join me in my journey of healing to the Boston Marathon starting line. 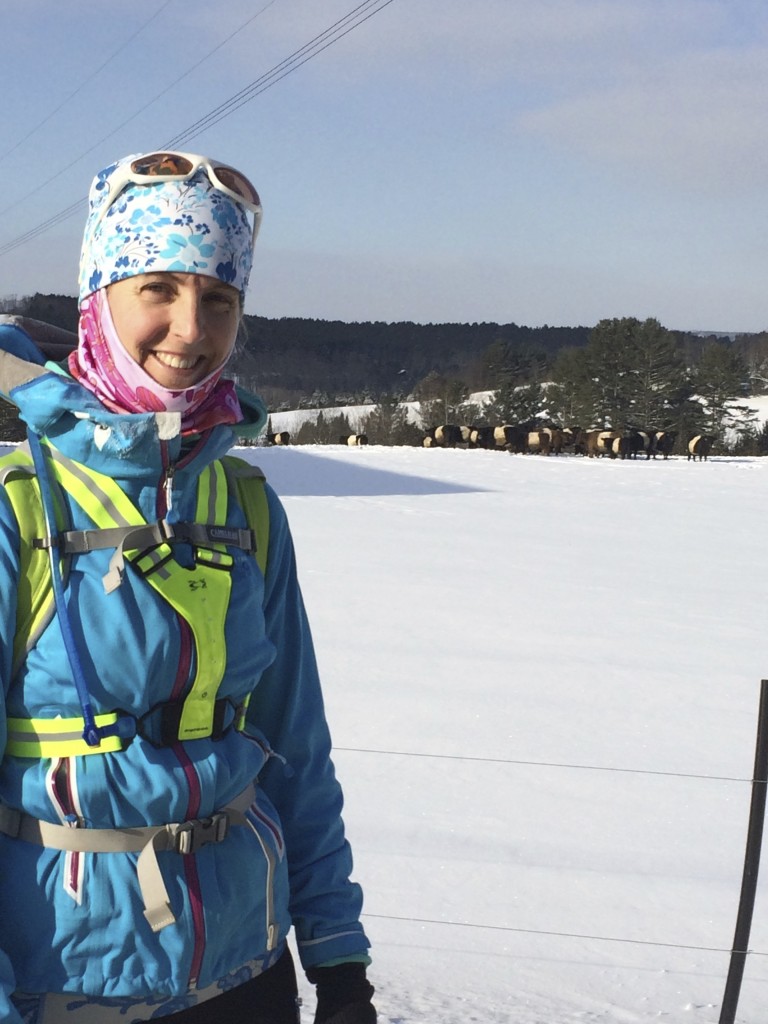 Make the best of the freezing miles. Bundle up and get it done!

I felt nervous leading up to marathon weekend. I wasn’t sure how the emotions would fill me or if I would even want to be there on race day. Organic Runner Dad and I arrived in Boston for marathon weekend and even though I felt overwhelmed I also felt lifted up by the energy of all of the people in the city wearing blue and gold.  We arrived at race number pick-up where I was glad to pick-up my bib to begin my trip to the finish line. I needed to be with all of these other runners many of whom shared the same fears as I did. 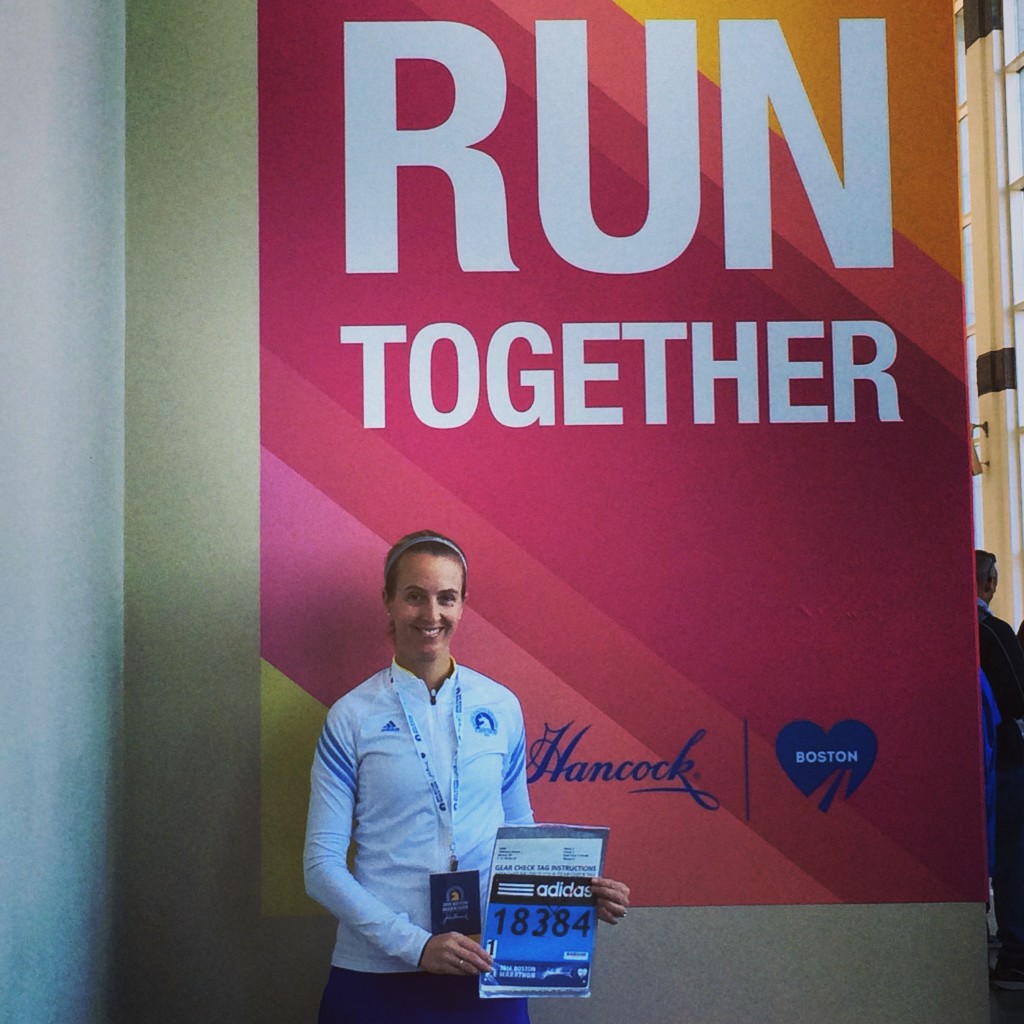 There were many overwhelming emotional moments during the weekend that stuck out in particular.  During packet pick-up I spoke with a man at the ticket desk in a quiet corner.  He asked, “had I run last year?” I told him I had and told him my story and about how I needed to be at the race to find healing. He too shared his story how he and his wife had been late to the finish line where they usually watched runners crossing when they heard the news on the radio.  They would have been there. Instead he lost a friend, Krystle. She had been standing there when everything happened. Tears welled in his eyes. I was silent but knew to offer a hug. The pain and emotion and the tears filled us both as we hugged for a moment. He told me he knew that he had to be at the race in 2014. He needed to. I understood but can’t even come close to understanding his level of grief. 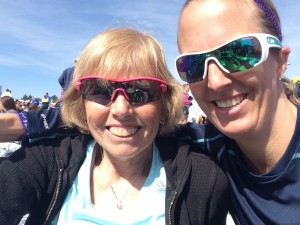 On the morning of the marathon I felt on edge. I wanted to be at the starting line and to just get going.  When I arrived at the bus to the starting line I ended up in line with a woman named May. She had run the Boston Marathon every year for an amazing streak including 2013. In 2013 she had finished even closer to tragedy. She had just passed through the finish line when the bombs went off. Initially confused by the commotion and then upon realizing the danger was real she new she needed to get out of there. She told me she was able to get away from the finish area and then out of Boston as quickly as she could back to the safety of her home. She told me about the fear of returning to the city and how she hadn’t been back in the city since April 15, 2013.  She too was on a quest for healing. To run the race, to run strong and to finish.  We spent the entire morning leading up to the race together in the starting area and even in the starting corral. Her strength and resolve along with that of everyone at the start and lining the streets brought me new energy and strength to be there and be running. There was such comfort in being with someone who understood my experience. 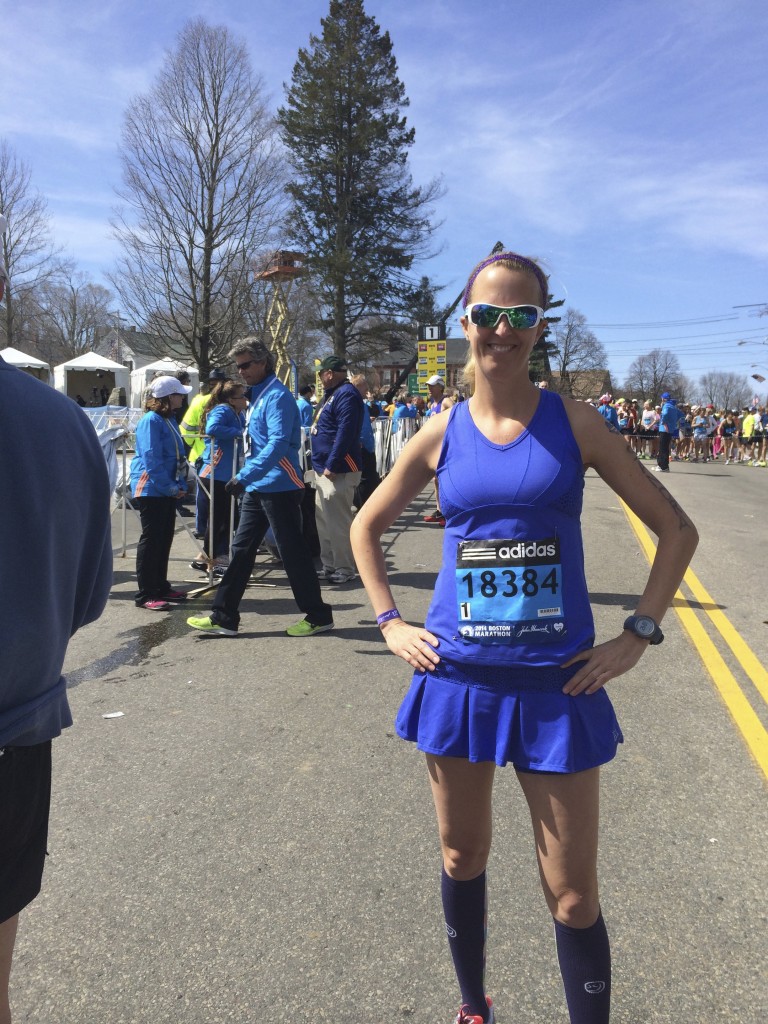 And finally. The race. We stood at the starting line. Nervous. Muscles twitching and ready to go. Words for the tragedy. The National Anthem. A flood of tears as we crossed the starting line.  I felt strong and ready to run. Fooled by the ease of the downhill at the start of the race. Running the first mile past the tower of shoes for Meg (Meg another runner lost to tragedy during the year, another person to run strong for, #MegsMiles). I felt strong emotionally until about 9 miles in, I was running too fast and then I saw runners for Team Martin Richard. A wave of emotions crashed over me. I had to catch my breath. I slowed my pace. Trying to find something that was comfortable and trying to settle my emotions. I could not stop thinking about 2013. Now I ran with a small edge of fear and sadness. I ran on. I ran to finish. Knowing I had gone out far too fast I tried to focus on running and the experience. I worked to embrace every emotion that hit me. I ran and ran and ran. 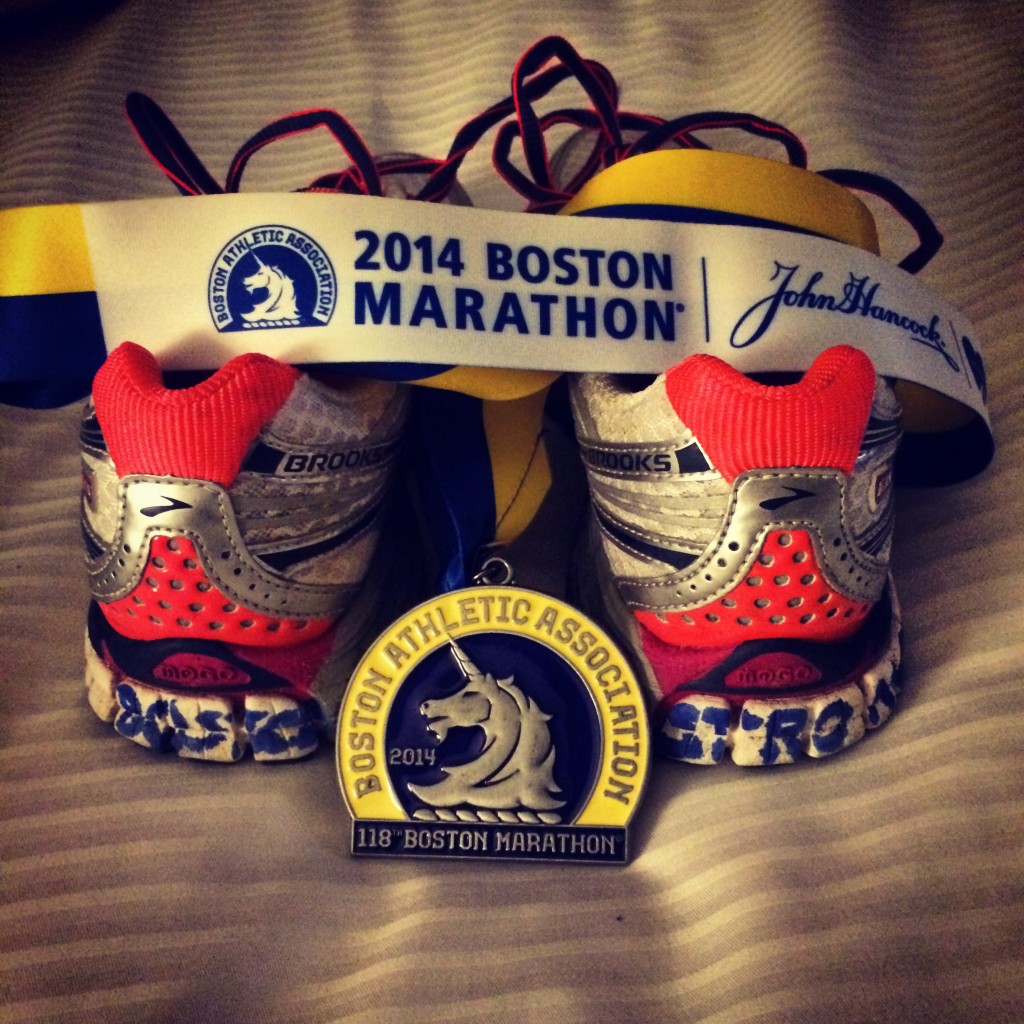 Exhausted by the unexpected heat, the tireless steps on the relentless pavement and exhausted emotionally I pressed on passing through the “Scream Tunnel” and tackling “Heartbreak Hill.” With each step I knew I was one step closer to conquering my fear of running down Boylston Street. Before we turned onto Boylston I came upon two men running on prosthetic legs, soldiers, injured in war.  If they could run this 26.2 then I could too. I ran for them. I ran for Martin Richard and his family I ran for Lingzi Lu and Krystle Campbell. I ran for Jeff Bauman. I ran for 264 people injured that horrible day and for everyone who was touched by the tragedy. As I crossed into the final mile. my head was spinning. I could see the finish line but needed to run down the metal chute of fences keeping the crowd safely from the runners. The previous year the fences were ripped away into a metal pile as spectators became heroes racing to save lives.  I pressed on. I pushed my pace. My breath quickening with each step. Until I crossed the line. A medal placed around my neck and immediately a sudden silence as the announcer marked the time of the tragedy that took hold of the heart and soul of Boston in 2013 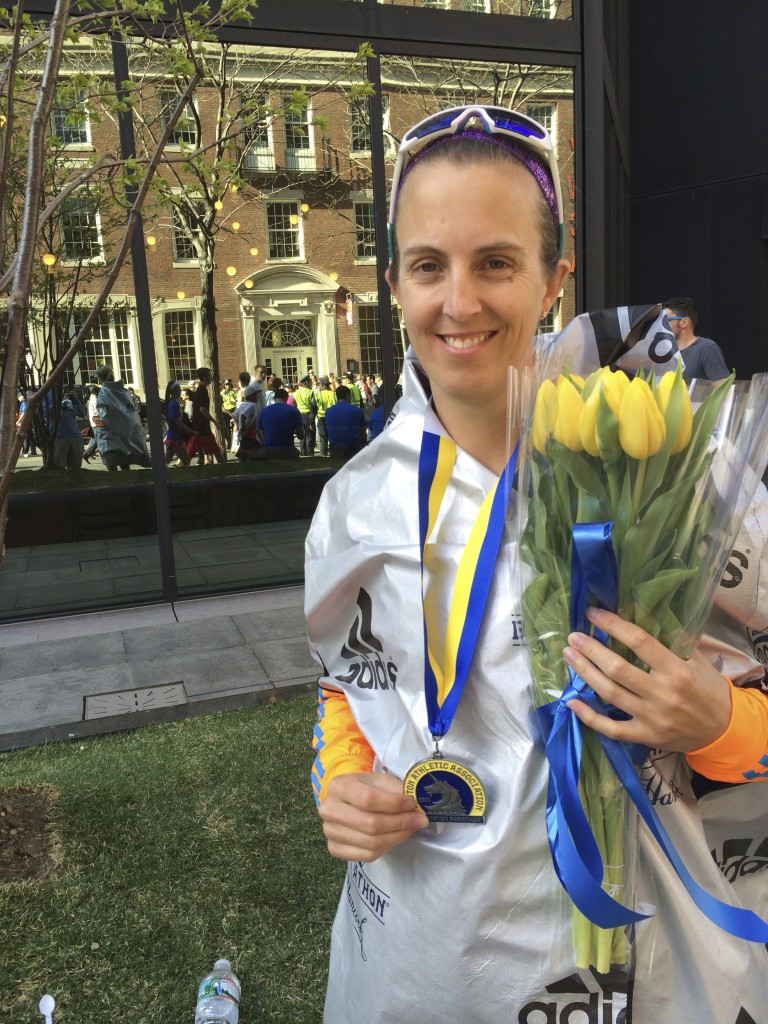 Finisher of the 2014 Boston Marathon

I will save you the tale of the aftermath of my race as it was not pretty. But what happened on Marathon Monday 2014 brought me much needed healing.  I will always carry these experiences with me. I often reflect back on what I was a part of. I know I am lucky. I was close. But I was far enough to be able to walk away. Far enough to be able to live every day to be my best and to be with those who love me. I am stronger every day.

So yes, in one word, this year was emotional.  It has taken me a long time to write this. I guess I am finally ready to share my story. I hope that you will share my story with others.  What is your word? Tell me your story.